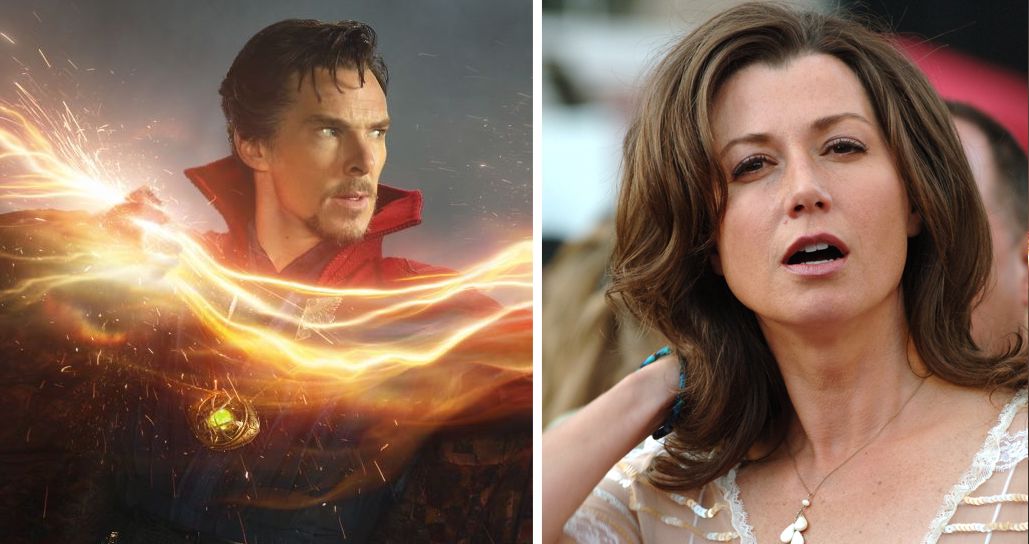 A reader recently reminded us of one of the stranger pieces of Contemporary Christian Music lore in recent memory that involves a lawsuit, Marvel Comics’ most-mustachioed sorcerer and CCM fairy godmother Amy Grant. In a nearly-forgotten piece of comic book/CCM history, Marvel got in trouble for using Grant’s likeness as Doctor Strange’s love interest.

The year was 1990 — long before Marvel began its cinematic dominance and Doctor Strange had become a household name thanks to Benedict Cumberbatch.

At the time, Marvel artist Jackson Guice was drawing Dr. Strange: Sorcerer Supreme along with writer duo Roy and Dann Thomas. In this particular story, Strange was tangling with some sort of vampire club and an ex-girlfriend of his with the unlikely name of Morgana Blessing got involved. Here’s Guice’s original cover, with Morgana’s haunting face in the background. You may not be familiar with Strange’s love life but does this woman look a tad …familiar?

If so, that’s because Guice used Amy Grant as a model for Morgana. According to Comic Book Resources, he used the cover of Grant’s 1986 greatest hits album The Collection.

The interior panels, which were also drawn by Guice, don’t use any album covers for inspiration, but it’s hard to miss the likeness to Grant.

What Guice did isn’t exactly uncommon. Comic book artists often use photographs, models and even other comics as inspirations for their work. It’s generally considered fair play as long as it’s not a direct ripoff but in this case, Grant’s management team got wind and they weren’t happy.

Mike Blanton and Dan Harrell contacted Marvel to warn them of an impending complaint. They weren’t upset about the copyright situation (they didn’t even own the rights to the photo in question, which was taken by a photographer named Mark Tucker, whose website is well worth checking out). Instead, Harrell and Blanton were concerned about the mystical overtones of Doctor Strange’s adventures, which they said ran contrary to Grant’s wholesome image. They were worried it would look like Grant was condoning the sort of magical hijinks Strange got himself into on a monthly basis. From the complaint:

Many fans of Christian music consider interest in witchcraft and the occult to be antithetical to their Christian beliefs and to the message of Christian music in general. Therefore, an association of Amy Grant or her likeness [with Doctor Strange]…is likely to cause irreparable injury to Grant’s reputation and good will…

Marvel didn’t admit to any wrongdoing, but the case was settled out of court and while the issue is digitally available on Marvel’s website, the image of “Morgana” is obscured from the cover.

Grant, of course, did eventually run into controversy from her Christian music fans anyway as she started veering into more mainstream pop music territory. But the outrage was barely a speed bump for her long career. Just last year, Grant’s music hit one billion streams. And Doctor Strange went on to save the whole universe in Avengers: Endgame, so it’s really a happy ending across the board.