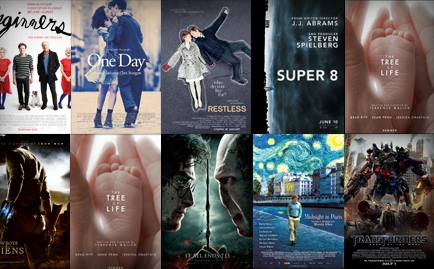 Summer may not bear a reputation for particularly good movies, especially since studios today often wait for award season to unleash Oscar contenders, but it certainly has a reputation for movies. It’s the time of year moviegoers can leave their brains at the box office, buy some popcorn, and sit back and enjoy big-budget blockbusters with alien robots, crystal skulls and that kind of stuff.

This summer has its share of those flicks, including the 50 superhero films that won’t be mentioned here because, well, you’ve already seen them everywhere else, and thankfully so. Movies like Cowboys & Aliens and Super 8 look awesome and should be loads of fun. They’ll hopefully remind us that cinema must first and foremost be enjoyed before anything else.

But fortunately, 2011’s dog days also boast some enticing films that don’t fit the summer movie mold. From Terrence Malick’s anticipated Tree of Life to The Hangover Part II, the months ahead include a vast array of movies that should not only entertain us but leave some sort of imprint on our lives. If they don’t, oh well. It is, after all, summer.

These Could Change Your Life

There’s nothing like a film by Terrence Malick. His films are visual poetry: beautiful, reflective and profound. And while his prior works have all been epic, Tree of Life has the potential to be the most stirring. Starring Brad Pitt and Sean Penn, the story seeks to explore life’s biggest questions through one soul’s transition from childhood to adulthood and his longing for redemption.

This baseball movie about Oakland Athletics General Manager Billy Beane and his attempt to make the A’s a more competitive team reeks of greatness. The plot may not seem appealing, but Aaron Sorkin (The Social Network) wrote the screenplay and Bennett Miller (Capote) directed it. Plus, the film stars Brad Pitt, Jonah Hill and Philip Seymour Hoffman. With those stars, it’s bound to play well.

Woody Allen has pretty much proven himself a staunch nihilist and atheist—but he’s also proven he can make good, interesting films year after year. This year’s entry, a romantic comedy starring Adrien Brody, Rachel McAdams and Owen Wilson, appears a bit more lighthearted and buoyant than his recent fare. That’s good news for both optimists and fans of his earlier comedies.

Based on a play by Jason Lew, Restless spins a tale of love and mortality as a terminally ill girl, played by rising actress Mia Wasikowska, falls for a boy who encounters the ghost of a Japanese kamikaze pilot. Director Gus Van Sant, who’s already made several profound films dealing with youth, including Elephant and Paranoid Park, seems a perfect fit for this unique story.

Name Drop These and Sound Hip

Mike Mills returns with a second feature film, Beginners, after his underrated art-house comedy Thumbsucker. This piece, a bit more on the serious side, tells the true story of Mills’ father, who left his son with startling news before dying of cancer five years later. Ewan McGregor, Christopher Plummer and Melanie Laurent (Inglourious Basterds) play the leads, which makes it just that much more promising.

Director Drake Doremus may not be a household name, but he’s already turning heads with Like Crazy, the winner of the Grand Jury Prize at the Sundance Film Festival. The film follows a British girl, played by newcomer Felicity Jones, who falls in love with an American boy. Their relationship is put to the test when the couple becomes separated by distance. With all the buzz, Like Crazy could potentially be this year’s best love story.

If The Details’ premise—which deals with worms, raccoons and a married couple undergoing an existential nightmare because of them—doesn’t do it for you, then you should know that the dark comedy stars Tobey Maguire, Elizabeth Banks and Laura Linney. Oh, and it’s directed by Jacob Aaron Estes, the visionary behind that spectacular 2004 coming-of-age drama Mean Creek.

In 2009, Lone Scherfig surprised us all with An Education, which earned three Oscar nominations and helped Carey Mulligan achieve the recognition she deserves. This year she directs One Day, another story of romance and heartache. Starring Anne Hathaway, Jim Sturgess and Patricia Clarkson, the film follows two young lovers across 20 years. It could either be everything An Education almost was, or proof that Scherfig’s first feature was a fluke.

Transformers: Dark of the Moon

Say what you want about Michael Bay, but the guy is some kind of genius when it comes to brainless blockbusters with lots and lots of explosions. It’s as if he was born to make those sorts of movies. Dark of the Moon, which brings the alien robots to, well, the moon, looks to be the perfect finale to a series that’s been big, loud and stupid yet satisfying.

This sci-fi flick—written and directed by J.J. Abrams, the mastermind behind Lost, and featuring Elle Fanning and Kyle Chandler of Friday Night Lights—could be the summer blockbuster we’ve all been waiting for. Set in 1979 Ohio, it tells the story of six young children who discover something alien amid a catastrophic train wreck. The premise invokes the older work of Spielberg (the film’s producer), making it all the more exciting.

This is the moment Harry Potter fans have anticipated for what seems like forever. With the success of Deathly Hallows: Part 1, which basically existed to set up Part 2, there’s a lot to look forward to here, especially in terms of battles and visuals. If nothing else, the film should show Christians who oppose the series how evident Christ is in it.

Next to Super 8, Cowboys & Aliens could very well be the supreme summer movie. Based on the 2006 graphic novel of the same name, the sci-fi Western centers on an alien invasion in 1873 Arizona. With that original of a story and a cast featuring Daniel Craig, Harrison Ford, Sam Rockwell and Paul Dano, the film’s success will hang on whether director Jon Favreau (Iron Man) can handle such big guns.

A much longer version of this article (with more movies!) appears in the May/June 2011 issue of RELEVANT. To read more articles like this, subscribe by clicking here.

Syria Cracks Down on Protesters’ Homes