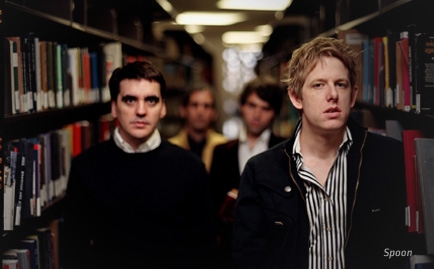 You need to note, we’re not advocating that you buy all of these albums or even listen to them—so remember that before you think about e-mailing us about how “Lil’ Wayne’s album is so vulgar” or “Why is Joanna Newsom so weird?” We’ll probably just agree with you.

So pass the hot chocolate and break out your record player for these winter/spring album releases. Oh, and we’re sure that we’ve forgotten some—we’re sure you’ll let us know what we’ve missed in the comments section:

January has produced a wealth of indie rock: Vampire Weekend, Eels, Spoon and next-big-thing Surfer Blood (don’t believe us? Check out this MP3 of "Swim") have already released their albums and made 2010 a good year of music already. And Baltimore breakouts Animal Collective, looking to capitalize on their indie-psychedelia trendsetting, roars out a reissue of their 2003 album Campfire Songs on Jan. 26. The original version of the record is out of print, but this re-release on Paw Tracks Records should whet the ferocious appetite of AC fans new and old. That same day, Christian rockers Deas Vail (the first signees to Mono vs. Stereo since Relient K took over the label) finally physically release their latest, Birds and Cages.

Another Baltimore band, those purveyors of dreamy pop Beach House are back with Teen Dream on Jan 26. Victoria Legrand and Alex Scully are the masters of fuzz, haze and melody, and the combination of all three, so this, their first release on Sub Pop Records, shouldn’t disappoint. Meanwhile, Tooth & Nail rockers Number One Gun are also set to release their newest, To the Secrets and Knowledge, on the same day.

Look down at your jeans. Are they skinny? If so, you’re going to be stoked about the release of Hot Chip’s 4th album, One Life Stand, due out on February 1st. The nerdy (or is it post-nerdy?) British dance band returns for more sweaters and synthesizers, and the album includes one song the band says was directly influenced by Susan Boyle.

If your dancing style is more … inappropriate, you’ll be excited for the release of Jamie Foxx’s sure-to-be-appropriately titled Body. It will also probably be terrible.

Is trip-hop over? If so, consider this the resurrection: legendary electronic duo Massive Attack drops a new release, Heligoland, on Feb. 9. Sure-to-be-awesome cameos include Damon Albarn of Blur and Mazzy Star lead singer Hope Sandoval. February 9th also brings the new album Odd Blood from buzz band Yeasayer, who hope to claim the “hipster-band-with-world-beats” in 2010. And Tooth and Nail superstar Aaron Sprinkle’s band, Fair, releases their next project, Disappearing World.

February 16th sees an influx of hip-hop … though knowing hip-hop album release dates, all of these records could be moved to summer for all we know. The newest from Usher (who is newly single and, presumably, ready to mingle … get ready with the parental advisory sticker) and The Game (you know, the rapper who had to feud with 50 Cent to restore his career) come out that day, along with another “mix” album of Wu Tang tracks. On the way other side of the spectrum, worship group Gungor release their newest album (and first as Gungor), Beautiful Things. One guarantee: it will talk about more beautiful things than the new album from The Game.

Work, the third album from Swedish indie group Shout Out Louds, arrives on Feb. 23. They’re not necessarily innovative, but the band is always good for churning out catchy rock with solid intentions. Another Swedish group, The Radio Dept., will see if their love from director Sofia Coppola will result in higher album sales with their effort Clinging to a Scheme. British hip-hopper Mike Skinner returns with another album as The Streets—if he can re-find that drive and whip-smart commentary so prevalent on his first two albums, it could be great. Also due on 2/23 is the latest album from soulstress Erykah Badu, New Amerykah, Part II: Return of the Ankh, a follow up to 2008’s underrated New Amerykah, Part I.

Christian indie pop-rockers The Rocket Summer (think Owl City or MuteMath) make their debut on Universal with Of Men and Angels on February 23rd. If they’re savvy, they’ll release a single about called “Lightning Bug” that finally knocks “Fireflies” off the charts. If poppy music isn’t your thing, then you’ll want to turn to harpist Joanna Newsom’s newest, Have One on Me, which is practically guaranteed to have no singable hooks.

One of spring’s freshest collaborations is Broken Bells, an ad hoc partnering of Danger Mouse, the acclaimed hip-hop producer and Gnarls Barkley alum, and James Mercer of indie darlings The Shins. Their self-titled LP is out on March 9. Super depressing (and fairly profane/talented) Scottish rockers Frightened Rabbit also return that day with with the awesomely titled The Winter of Mixed Drinks, while hardrockers Demon Hunter once again slay some, um, demons with their newest, The World Is a Thorn. Which, weirdly, is more of a bummer title than Frightened Rabbit’s.

Oh, Black Rebel Motorcycle Club. Your alternately shoegazing and gospel Americana is so sublime, yet so same-y. Can you escape the monotony with Beat the Devil’s Tattoo on March 9? Hopefully, your first release on your own record label (Abstract Dragon/Vagrant) will take us back to the twangy foot-stomping of Howl.

If you hate both shoegaze and gospel (what’s wrong with you?), then you’ll surely find something to like on the latest release from cartoon supergroup Gorillaz as they release Plastic Beach on March 9. It features everyone from Snoop Dogg to Lou Reed.

British glitter-rockers Goldfrapp roll out their fifth studio album, Head First, on March 23. If you feel like some soaring music that will make you feel like you can take on the world, Sigur Ros frontman Jonsi releases his first solo album on the 23rd, the simply titled Go.

Do you like Zooey Deschanel? Of course you do. She & Him, her cuter-than-words collaboration with M. Ward, returns on March 23 with their second album, Volume 2 (get it?). The record will feature 11 new tracks written by Deschanel, as well as some cover songs. Now that you’re married to Ben Gibbard, Zooey, we’re eagerly awaiting our She & Him/Death Cab collaboration. Make it happen.

Finally, the real standouts of 2010 might also have the most ambiguous release dates. Arcade Fire is set for a release in May, produced by Markus Dravs who worked on 2007’s Neon Bible. Radiohead reportedly has begun work on their next album (but aren’t they always doing just that?). We may also finally see a new LP from Christian-group-of-yore Sixpence None the Richer, who, if last year’s My Dear Machine EP is any indication, still have a lot of life left. This spring will also most likely finally see the release of Lil’ Wayne’s rock album, Rebirth, which, in a first for Lil’, will probably feature music just as awful as his lyrics.

Jack White’s The Dead Weather is already halfway done recording their sophomore effort, which means in true White fashion, it will arrive to the public with little warning. Unless, of course, he suddenly decides to unleash a new White Stripes record—which he’s hinted at. And The Strokes are recording again, on the heels of a solid solo LP from frontman Julian Casablancas. Both Interpol and LCD Soundsytem are supposed to have new albums coming out. Finally, MGMT are set to release the perfectly-titled-if-they’re-talking-about-their-career Congratulations sometime this spring.

Whew! So many records, so little time (and money). But we hope you’ve found something here that’s got you excited for this next season in music. If not … what’d we miss?

Aid for Haiti on Ground … and Stuck There