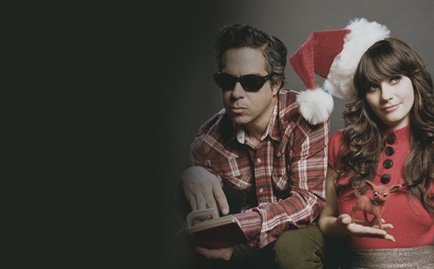 In searching through this year’s holiday releases, I’ve stumbled across quite a few new albums. Even if you can’t stand Christmas music (like I once couldn’t), some of them definitely deserve a shot. Others, not so much. (I’m looking at you, Gaga.)

One of the most high-profile holiday albums this year comes to us by way of Zooey Deschanel and M. Ward. If you ever saw the movie Elf, you know that Deschanel’s voice was custom-made for Christmas music. Coupled with M. Ward’s dust-covered classic folk, Deschanel has created some memorable takes on holiday classics. Standout tracks include “Christmas Day” and “Little Saint Nick,” both of which have Beach Boy Brian Wilson listed as a writer. The duo’s take on “The Christmas Waltz” is easily the quintessential version of the song. And they’ve charmingly flip-flopped the roles on “Baby, It’s Cold Outside,” which by now should’ve been dishonorably discharged from the Christmas canon on the grounds that “no” really does, in fact, mean “no.”

This year, uber-indie label Carpark Records offered a free, limited-edition, vinyl-only holiday compilation, as a way of saying, “Thanks for buying all those Toro Y Moi albums.” When I got home with mine and applied needle to wax, I was surprised by the lack of Christmasy songs. Then, much to my relief, when I flipped the record, I was greeted by Dan Deacon’s hilariously awesome version of “Silver Bells,” in which dog, cat and duck sounds generated by a very old keyboard make the melody. Light Pollution’s “Canada” is the record’s best track, and Class Actress ends the eight-song record with a beautiful rendition of “Silent Night.”

Each year since 2009, the four members of Folk Angel have released a record of Christmas music. This year, however, is the first time they’ve released a full-length album. Unlike their previous efforts, Comfort & Joy traverses across several genres from folk to hip-hop, but it mostly stays the folk course.
Standout tracks include the upbeat, warm “The Christmas Tree,” the album’s only original song, and a few musical interludes that feature charming saw solos

Josh T. Pearson’s 2011 album Last of the Country Gentlemen is sobering, painful, and ultimately serene. The surprise Christmas EP he released late last month is equally haunting, but rather than hinging on Pearson’s pain, this EP relies more on his charm. The record’s five songs—traditional, religious Christmas carols—were each recorded in one take, so the end product doesn’t do much to cover up his occasional mistakes. Rather, what you end up with is something like lightning in a bottle. Songs like “Angels We Have Heard on High” and “O Holy Night” sound comforting to Pearson’s troubled soul, and even downright worshipful.

Fans of Jack Johnson will certainly adore almost every note on this holiday compilation. Those who aren’t part of Johnson’s clean-cut, beach-bum fan club, however, will find it murky with funky acoustic takes on holiday classics mixed in with a few originals. “Party Hard” by Zach Gill is a highly relatable, fun tune about being overcommitted to Christmas parties. But the two best songs by a long shot come from Rogue Wave, whose take on “Jingle Bell Rock” is likely the best out there, and Neil Halstead with his lonesome folk ballad “Home for the Season.”

It would be difficult for My Morning Jacket to one-up their 2000 Christmas EP, My Morning Jacket Does Xmas Fiasco Style, but there is reason to believe that the newly released iTunes Session EP is just as good, if not better. While Xmas consisted of all original songs, the new release offers some brilliantly played covers, including The Band’s “Christmas Must Be Tonight.” There’s a pedal steel guitar that flows throughout the EP, including original song “Welcome Home,” giving it a laid-back country feel. And, because the band recorded it in a 14-hour session while on tour in Amsterdam, tour mates The Head and The Heart sit in on a few tracks. Some songs sound haunting, a few sound hungover, but they’re all good, start to finish.

Michael Bublé is kind of a genius in that he doesn’t care to be "cool" by hipster standards. But the Canuck has had a wildly successful career thanks to moms everywhere. On his new album, Christmas, he’s making his biggest appeal to them yet. He manages to capture a vintage, big-band sound with a warm stand-up bass, jazzy drums and a horn section straight out of Glenn Miller’s band. That mixed with Bublé’s distinctive voice is enough to make your mom figure out what iTunes is, and accidentally buy the album three
times (while you search for your earbuds).

The thing about Christmas music is that it allows serious bands to cut loose a little. Such is the case with Seryn. Still riding high from the release of their 2011 debut, This Is Where We Are, the band decided to release a Christmas album. While it came as a surprise, it certainly wasn’t thrown together. The 11-song offering showcases the band’s signature harmonies, musicianship and time-signature-shifting rhythms. “Joy to the World” demonstrates all three, as does “O Holy Night.” The record also allows friends like Doug Burr and Dalton Kane some facetime. Burr’s serene “O Come All Ye Faithful” is offset by Kane’s hilarious album ender, “The Nicest Way to Tell a Girl You Love … (Santa Isn’t Real).”

We know there are many more new Christmas albums to choose from. Which ones do you have on rotation this year?