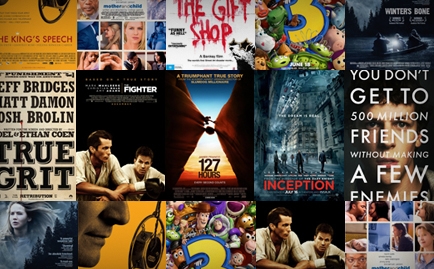 2009 was a weird year for film. The box office was generally up—probably because everyone wanted to go see a movie rather than be reminded of the crashing economy. It was a year when people took stock of what mattered again, and found the American Dream wanting. And that spirit and sense of something deeper crept into some of our best films this year. Sure, there was escapist fun (that’s why The Hangover was the sleeper hit of the year) … but even Pixar made a movie about dying. And the most anticipated kids’ movie of the year was about a bunch of monsters that personified a young boy’s rage. And Star Trek … okay, fine, Star Trek was just a blast. As the year wraps up, we’re happy to bring you our top 20 films of the year. Like any media, there are films we’ve likely overlooked; we’ll probably discover some new favorites in 2010 and beyond. But for now: These are the movies that stood tall in 2009.

Up in the Air is a film for 2009—George Clooney plays a man whose whole job is to fire people during the recession. It’s about isolation, love, sex, sadness, travel, frequent flier miles and coming-of-age. But above all, it’s about this: Are our relationships worth it? While you might think you know the answer, Up in the Air doesn’t take a sappy outlook. People are broken and so are our relationships; so … can we bear the pain and the risk and get close to other people? That’s the question at the heart of this sadly joyful film—and the questions it asks (and the few answers it provides) will leave you thinking for days.

2. Where the Wild Things Are

What is Where the Wild Things Are? Is it a kid’s movie? Not really. If it was "just" a kid’s movie, it might be a failure. But as a movie reflecting on the conflicting, terrifying and completely non-understandable emotions of being a child, it’s perfect. It stands tall as a giant, frightening critique of every other "nice" children’s  movie, proudly waving its freak flag high as it seeks to reclaim real childhood (or, at least, real boyhood). It’s not a perfect movie, but then, neither is childhood. And really, that’s what the film wants to do and in that, it does a perfect job.

UP
is an example of what makes movies great. It’s a story about an old man
and a boy, about aging and being young, about life and death. It’s
funny, incredibly beautiful and remarkably moving. It’s a film that
will connect with everyone and will be a favorite for many generations
to come. Pixar shows us, once again, that a movie can be made without
coarse language, extreme violence or sexual connotations and have just
as much effect, on all levels, as any other movie released this year. UP
stands tall among the films of the year, on the shoulders of an old
man’s pain and a young boy’s idealism—and the gray area in between.

This charming little film is a microcosm of a 21st-century romance.
It stars Joseph Gordon-Levitt as a greeting card writer who falls hard
for a coworker (the charming-as-always Zooey Deschanel) and begins a
relationship with her. The film is remarkable for its realistic (and
generally unsentimental) treatment of the ups and downs in a
relationship—from the soaring highs of the first date to the crushing
lows of a date gone bad—and its exploration of how our thinking about
love has been so changed by the media we consume. The ending might take
you by surprise, but this incredible movie ought to make you anticipate
the unexpected. It’s sure to be a seminal film for this generation.

The Hurt Locker is much more interested in looking at each of
these questions than trying to take on a grandiose view of war. The
film is a microcosmic look at the lives of three soldiers fighting in
Iraq in 2004, working as bomb defusers. Told in an episodic structure,
the entire movie is incredibly intense; each frame is designed to show
just exactly how close to death each of the characters is at any given
moment. This movie can be appreciated for its sense of constant stress
and fear—it will make you think more about the people you know who have
fought in Iraq, and make you remember war is something that affects
every person touched by it, even if you think you’re too powerful or in
control to let it.

District 9 is something like the Creature from the Black Lagoon meets Hotel Rwanda, blending cultural critique with ’50s-style monster drama. Made on a shoestring budget by a team of unknown South Africans, District 9 presents a documentary-style allegory of racism, apartheid and social unrest. When a spaceship stalls over Johannesburg and unloads about a million alien refugees, are we to fear them, or should they fear us? The government corrals the "Prawns" (the human epithet applied to them) into a slum, and instigates a controlled human/alien segregation for the next 20 years. The move explores what occurs when the system becomes a witches’ brew of greed, courage and charity.

Neil Gaiman’s novel is perfectly realized in this stop-motion animated film directed by Henry Selick (The Nightmare before Christmas).
After moving into the Pink Palace Apartments with her parents, Coraline
Jones finds a doorway to a world that mirrors her own boring life.
After a few trips through the doorway, Coraline realizes that maybe her
better world might not be exactly what she thinks it is. This film is
pretty dark for a kid’s movie—but, then again, it’s not really a kid’s
movie. The subject matter is geared toward a younger crowd but the
story is a “cautionary tale” like Grimm’s Fairytales. The stop motion
animation in the film is beautiful. The textures and feeling of space
is something you just don’t get with regular animation, at least not
yet. Along with The Nightmare before Christmas and James and the Giant Peach, Henry Selick is one of the few directors still working with the stop-motion medium, and with a film like Coraline we’re glad he still is.

Imagine that the entire world as you’ve known it has come to an end right before your eyes. And now all that’s left is you—and the ten-year-old son whose care has become your entire purpose of your existence. "What then?" the universe asks. Do you keep a faith in God, or curse the hopelessness around you? The Road is a modern-day parable about the need to maintain morals even when all sense of morality seems lost. It is about maintaining a fire of righteousness even when surrounded by those who have gone wrong. And it is a film that once seen, will be hard to ever forget.

Inglorious Basterds is
Quentin Tarantino’s love letter to cinema, to conversation, to pulp
fiction (pun fully intended) and, above all, to WWII—the way he thinks
it should have been. If only the pivotal battles of the war were begun
with long-winded monologues of why one side is better than the other.
If only cinema had world-changing and permanent effects (or
consequences?). If only people died in a cinematically beautiful spray
of white and red. If only a band of brothers really could end an entire
war. And if only the ends justified the means. In Tarantino’s World War
II, they always do.

Do you ever wonder where your food comes from, or why it’s so inexpensive at the grocery store and fast food places? Food, Inc. is a documentary that explores such questions, including insight from authors Michael Pollan and Eric Schlosser (The Omnivore’s Dilemma and Fast Food Nation, respectively). From seeing how chickens are mass-produced (and how chicken farmers are bullied) by major corporations, to seeing a mother-turned-activist who lost her healthy two-year-old to E. coli after he ate a contaminated fast food burger, the film will make you see that although fast food meals are cheap, they still come at a price. It might also help you form a new habit: buying local at farmers’ markets rather than turning to a grocery store.

When the Weather Outside Is Frightful

Tell Me All the Great Things