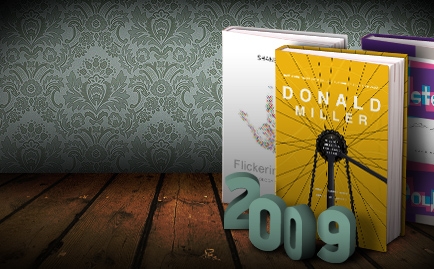 1. Flickering Pixels: How Technology Shapes Your Faith, by Shane Hipps

Shane Hipps is a devotee of Marshall McLuhan, that guy who said, "The medium is the message." A Mennonite pastor, Hipps shows the impact of the printing press on religious thought, making a case that Protestantism took the shape it did partly because of innovations in print media. "How disconcerting," he writes, "to have a faith yoked so closely to a medium that is now in the dusk of its life."   The book reads like a sea-change; it is time to stop lamenting the weathering of old wineskins and to shepherd the Image Era as it teases out its own message. Hipps helpfully shows that the cliché—media change but the message remains the same—is not true. What remains the same is neither media nor message, but the message-giver. Hipps reads better as a culture critic than as a pastor; his discussions about media are infinitely more tweetable than his applications to discipleship. But the books that follow Flickering Pixels will benefit from the trail Hipps is blazing: a new renaissance is in the offing, with all the positives and negatives that will undoubtedly come with it.

2. The Selected Works of T.S. Spivet, by Reif Larsen

The Selected Works of T.S. Spivet tells the story of Tecumseh Sparrow Spivet, a 12-year-old genius cartographer growing up on a Montana ranch with his cowboy father and scientist mother. Feeling distant from his parents after the death of his brother, T.S. maps his world in dozens of diagrams with names like “Maps of People Doing Things” and “Freight Train as a Sound Sandwich,” many of which are included in the book. When T.S. wins a prestigious Smithsonian fellowship—the museum doesn’t know the recipient is in junior high—he runs away from home and train-hops to Washington to accept the award in person, meeting an eclectic cast of misfits along the way. Comparisons to Jonathan Safran Foer and Marisha Pessl, two young writers whose recent novels featured school-age narrators of precocious brilliance, are probably inevitable. But T.S. Spivet is a work of startling originality.

3. A Million Miles in a Thousand Years, by Donald Miller

Donald Miller wants to tell you a story. Of the time he hiked Machu Picchu to woo a girl; of the time he rode his bike across the country to help build wells in Africa; of how he went looking for his father; of how two filmmakers showed up at his door with the idea of turning his life into a movie. Donald Miller wants to tell you a story of what it means to organize your life into an epic of risk and reward and meaning. The elements that made Blue Like Jazz a national bestseller are here—Million Miles is funny, charming and disarmingly honest. Miller has come into his own as a prose craftsman, as in this passage reflecting on a beloved uncle felled by a heart attack: “[His] life was like the roots of a tree that went miles into the soil and miles around its trunk and came up in my cousins, in their faces and their voices and their character. I didn’t think you could kill a tree that big. Not even God could kill a tree that big.” Miller’s latest book is his best so far—his guts are in this one.

This graphic novel isn’t kid’s stuff. The main character, the titular Asterios Polyp, is a miserable, 50-year-old failed architect coming off of a painful divorce and trying to escape a New York that has swallowed him (and his pride). His apartment burns down and sends him on an odyssey of sorts—straight into the arms of a kind gas station attendant and his strange shaman of a wife. The overarching story is a story of love won, lost and pined after again and again. It’s a redemptive, non-linear story told in present tenses and flashbacks expertly woven together by artist and writer David Mazzucchelli. It’s a quick read because it’s told in pictures, but as soon as you’re finished, you’ll reach for it again to figure out what visual cues were put in the beginning and to continue chewing on the thoughtful ideas presented. It stands among the year’s best novels—much more than kid’s stuff.

5. Shop Class as Soulcraft: An Inquiry into the Value of Work, by Matthew B. Crawford

A philosopher/mechanic, Michael Crawford explores the benefits, both for the individual and for the community, of the manual trades in Shop Class as Soulcraft.  Drawing on his own experience as an electrician and a motorcycle mechanic, as well as the experiences of other craftsmen he encounters, Crawford challenges the prevalent assumption that college is for everyone and articulates the difference between the “knowing how” required of the trades and the “knowing what” stressed in the modern American education system. “Practical know-how,” Crawford argues convincingly, “is always tied to the experience of a particular person. It can’t be downloaded, it can only be lived.” Shop Class as Soulcraft is an especially salient read in today’s economic environment and calls us to reconsider how good work is defined in 21st century America.

6. The Magicians, by Lev Grossman

It is impossible to talk about The Magicians without mentioning Harry Potter or The Chronicles of Narnia, so we’re not even going to try. The “Harry” in Lev Grossman’s novel is Quentin Coldwater, a brilliant, bored, and lonely kid about to graduate high school before he is swept away to Brakebills, an elite university for magicians in upstate New York. This book isn’t for kids, though, and while Lewis and Rowling provide the foundation, Grossman builds a dark and spellbinding story that’s entirely his own, creating a memorable cast of characters who inhabit a world both strange and unpredictably familiar.

Wendell Berry doesn’t belong to a particular school of poetry. He writes poetry, he says, for the love of it and to his own satisfaction. In his latest collection, Berry utilizes a variety of forms, including letter poems, a speech, a questionnaire, and short poems as elegantly concise as haiku: “Suppose we did our work/like the snow, quietly, quietly/leaving nothing out.” The majority of Leavings consists of Sabbath poems, verses written during Berry’s Sunday morning walks, which touch on themes familiar to readers of Berry’s poetry, fiction and essays: marriage, the land, good work and the miracle and mystery of life and death.

Susan Isaacs had a bad year in 2003: her father died, her mother had a stroke; her acting career tanked while four best friends got their big break; she broke up with her almost-fiancée as other friends got married, and then she saw that same almost-fiancée French-kissing another girl in Central Park. Feeling abandoned by God, and hearing a friend describe faith as a love story, Isaacs decides to take God to couples counseling, “because we’re not getting along.”   The dialogue between Isaacs and God (with a counselor named Rudy moderating) is raw, real and laugh-out-loud funny. Isaacs’ honesty and disarming humor about darkness, church and issues around alcohol, eating disorders and sex, pull the reader deeper into her story. Isaacs is transformed when the “God” in her mind is replaced by the real God of love, and she rediscovers grace.

9. A Paradise Built in Hell, by Rebecca Solnit

The media focused extensively on the chaos and violence in New Orleans in the aftermath of Hurricane Katrina: looters, the Superdome, bands of armed men wandering the streets. What news coverage largely missed was the myriad ways strangers came together to save lives and homes, and to preserve the spirit of their beloved city. In her extraordinary new book, Rebecca Solnit investigates the spontaneous communities which arise in times of crisis. “In disaster people come together,” Solnit writes, “and though some fear this gathering as a mob, many cherish it as an experience of civil society that is close enough to paradise.

Challenging church doctrine may be the most controversial task a theologian can undertake. While critics accuse N.T. Wright of dissent, misunderstanding and even heresy, his book Justification: God’s Plan & Paul’s Vision relies on Scripture and its historical context to explain the full meaning of justification. Wright contends that the Christian focus should not be on “me and my salvation” but rather “God and God’s Purposes.” Justification is only one part of a much larger debate, yet it has implications for anyone seeking to better understand salvation and the story of God. Wright repeatedly references his critics in order to highlight the exact differences in their perspectives. In this way, Justification allows readers to pull up a chair and listen in on one of today’s most disputed doctrinal debates.

12. Manhood for Amateurs, by Michael Chabon

13. Eating the Dinosaur, by Chuck Klosterman

14. Pride & Prejudice and Zombies, by Jane Austen and Seth Grahame-Smith

15. The Unlikely Disciple: A Sinner’s Semester at America’s Holiest University, by Kevin Roose

16. Endpoint and Other Poems and My Father’s Tears: Stories, by John Updike

17. The Orthodox Heretic and Other Impossible Tales, by Peter Rollins

18. A Gate at the Stairs, by Lorrie Moore

19. Love is an Orientation, by Andrew Marin

20. Good Book: The Bizarre, Hilarious, Disturbing, Marvelous, and Inspiring Things I Learned When I Read Every Single Word of the Bible, by David Plotz

Honorable mention: The End of Overeating: Taking Control of the Insatiable American Appetite, by Dr. David Kessler; Bicycle Diaries, by David Byrne; Pocket Guide to the Afterlife: Heaven, Hell, and Other Ultimate Destinations, by Jason Boyett; George Sprott (1894-1975): A Picture Novella, by Seth; The End Is Now, by Rob Stennett; Drops Like Stars, by Rob Bell

A Diary of Change