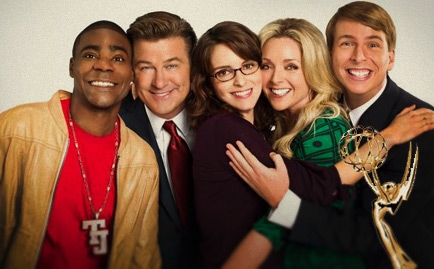 Best Red Carpet Moment: Despite TV Guide correspondent Carrie Ann Inaba’s pronouncement that this year’s Emmy awards boasted the “best dressed red carpet [she’s] ever seen," approximately the first hour and a half of the two-hour preshow could be described as nothing less than predictable. Inaba, best known for her work as a judge on ABC’s Dancing with the Stars, and fellow correspondent and Bachelor host Chris Harrison did their best with a tag-team routine in an effort to interview as many television celebrities as possible. Most of their limited interview time was absorbed with the all-important award show question, "Who are you wearing?” This was however not the case when it came time for Harrison to interview the cast of Flight of the Conchords. Rather than participating in a standard, boring interview, these gentleman quite literally took control of the proceedings and began interviewing Harrison about his thoughts on their chances of winning. The results were a hilarious departure from the red carpet as usual and, without question, this year’s best red carpet moment.

Best Hosting Shtick: Competition was tight in this category for the 2009 presentation. Neil Patrick Harris had many brilliant comedic moments as this year’s Master of ceremonies from a series of jokes played out live after his loss of outstanding supporting actor in a comedy for How I Met Your Mother to Jon Cryer (Two and a Half Men) to a video short claiming the death of television and the utter superiority of Internet technology. But the winner for the best hosting bit in the whole show has to be opening musical number, which melded current television and pop culture and comedy perfectly. Check out the video to the right to see what we mean.

Best Surprise Win: The best reaction of surprise came with the announcement of Kristin Chenoweth’s win for outstanding supporting actress in a comedy series. Her surprise was perhaps more pronounced than most because Pushing Daisies—the show that garnered her nomination—has since been canceled. In a gushing and teary acceptance speech Chenoweth said, "Thank you so much to the Academy for recognizing a show that’s no longer on the air,” and closed by making a play for a new role on one of her particular favorite shows, Mad Men or The Office.

Best Political Statement: Thankfully, there weren’t too many nominees in this category, but as always, there were a smattering of political digs during the broadcast. The best among them came from the writing team of The Daily Show with Jon Stewart. Accepting the award for outstanding writing in a variety music or comedy series, one writer explained his loss for words this way: "I haven’t had anything to say ever since George Bush left office." If there must be political commentary mixed into our entertainment shows (and we are not convinced there must be), at least the comments with a political bent were less bitter and more humorous than in past years.

Best Real-Life Lesson: It might be a stretch to try and pull out a positive life lesson from a celebrity spectacle that, while undeniably entertaining, is also undeniably a form of idolatry for many in our world, but we’ll give it our best shot. The lesson we are taking away from the 2009 Emmys is that we really can live our dreams. Survivor host Jeff Probst, winner of the award for outstanding host in a reality or reality/competition program, became the catalyst for this lesson. In his acceptance speech, he quoted storyteller Joseph Campbell as saying, "The adventure you’re ready for is the one you get." Probst concluded with this advice: "Life is short. Go for it."

These moments are just some of our favorites from the primetime Emmy Awards 2009. We hope you enjoyed “television’s biggest night,” and you will feel free to share any of your favorite moments that didn’t make our list. Oh, and keep watching television. The new season and the march toward Emmy night 2010 has already begun. For a full listing of this year’s winners, visit http://www.emmys.com/nominations