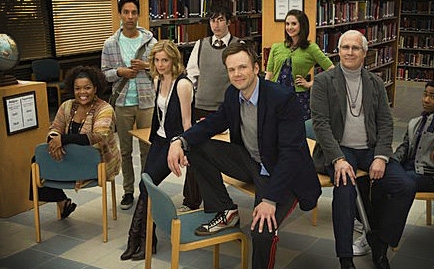 Autumn is one of the best times of the year. The leaves change colors, the air turns crisp, football returns, good movies arrive in theaters and TV finally resumes its seasons. The biggest night of comedies started up again last night (minus the much-beloved 30 Rock) and most shows are due back in circulation through the end of the month. In order to help you sort through the sheer volume of new and returning shows, we pick out our favorites of the new season—or, at least the shows that will be the most talked-about of the new season. But we want to hear what you think, too: What are you most looking forward to? What are your favorite returning shows? What did we miss?

Community joins The Office, 30 Rock and Parks & Recreation
to make up NBC’s very note-worthy Thursday night block—perhaps the
first time in a long time (aside from NBC) four shows will air at once
with no laugh track. Community stars Joel McHale (host of E!’s brilliant The Soup)
as a lawyer who gets found out as a fraud and has to go back to
community college. McHale’s character, Jeff, immediately resumes his
track record of lying to try to win over the resident pretty girl,
Britta (Gillian Jacobs). In forming a fake Spanish club, Jeff
inadvertently brings together a Breakfast Club-like gathering of strangers, including Chevy Chase as a burned-out former hippie. Add in involvement with some directors of Arrested Development, and it’s easy to see why Community is one of this fall’s most anticipated releases.

This
new sitcom on ABC stars three "modern families:" A traditional,
husband-wife-kids combo; an older man and his much-younger wife and her
son; and a gay couple who have just adopted a baby from Vietnam. It
might sound like the setup for a woefully unfunny sitcom that plays on
all the stereotypes possible while furthering every agenda it can think
of—but it has Christopher Lloyd as a producer, and he was the one
behind Cheers and Frasier. And it’s a faux-documentary (a la The Office)
that uses a single camera format and (thank goodness) no laugh track.
It’s first season will show whether or not it can overcome the stigma
of being a "comedy about families," but the first episode has one of
the characters trying to be cool while singing and dancing to a High School Musical track … and mocks him mercilessly. So it at least shows some promise.

Officially a spin-off of Family Guy,
this show stars the titular character Cleveland Brown and his son,
Cleveland Jr., as they leave the Rhode Island town of Quahog for
California … but then find themselves in a new life (and family) in
the small town of Stoolbend, Va. It’s about as absurd as it
sounds, but fans of creator Seth MacFarlane will find plenty to love
here. Cleveland meets and develops a relationship with a woman and her
two kids, who are a sexually charged elementary-aged boy and a skanky
teen girl, respectively. Other characters include the kindly redneck
next door, the Dave Matthews Band-loving preppy who lives with his mom
and the anthropomorphic bears who live next door. Who also happen to be
from Eastern Europe. And are Christians. Yeah. We’re sure it’ll be
occasionally offensive and sometimes laugh-out-loud—but it’ll also have
some sneaky thoughtful discussion points. In between the flashbacks and
fart jokes, of course.

Bored to Death
is a new comedy on HBO, which means it’s automatically better than
pretty much all the new network comedies. And sure enough, it is! The
show stars Jason “Wes Anderson regular” Schwartzman as Jonathan Ames, a
young Brooklyn writer who is lonely, bored and has a drinking problem.
He admits that he’s “just another self-hating New York Jew,” and
escapes his misanthropy by moonlighting as a Raymond Chandler-esque
private detective. Like most HBO shows, Bored looks and feels
cinematic and favors subtlety over easy laughs (and includes indie
music songs on the soundtrack … Andrew Bird!) The show’s offbeat humor
is aided immensely by supporting players Ted Danson as George
Christopher, an editor/socialite who employs Jonathan as his
sometimes-assistant/marijuana source, and Zach Galifianakis as
Jonathan’s best friend Ray. And Schwartzman is perfectly endearing as
always. Bored is a quirky little New York show that won’t have
mass appeal but may find critical success and a niche audience.
Basically par for the HBO course.

Cougars are so hot right now. In the post-Sex and the City, post-Desperate Housewives,
post-Demi/Ashton era, being a sexually aggressive fortysomething has never been so enviable. Enter Courtney Cox, 45 but still hot, fresh off
the failure of her underrated show Dirt. She’s the star of the new
comedy Cougar Town, which follows a Florida woman named Jules
Cobb, recently divorced and relationally frustrated. With her
17-year-old son (Dan Byrd) and her twentysomething assistant (Busy
Phillips) at her side, Jules decides that it’s never too late to live
like a twenty-something, even if you’re forty-something. So she’s out
on the prowl, cougar-style, looking for love with lawnboys and
lifeguards half her age. Thanks to creator/writer Bill Lawrence (Scrubs),
this show has potential to be a lot funnier than its premise indicates,
and with an aging “Monica” as the star, it seems like it just might be a
hit. As long as Lisa Kudrow doesn’t touch it.

Other returning half-hour comedies worth DVR-ing: The Office, 30 Rock, Parks & Recreation, How I Met Your Mother, Curb Your Enthusiasm, It’s Always Sunny in Philadelphia and The Big Bang Theory.

Every new season needs a good high-school-set show, and this year it’s Glee, the new comedy from Ryan Murphy (Nip/Tuck). Glee is basically Freaks and Geeks mixed with American Idol and High School Musical.
It’s about a struggling high school glee club (made up of a motley crew
of nerds, gays, outcasts, thespians, a jock and a popular girl) led by
a nice-guy teacher (Matthew Morrison) who has a bad marriage and a deep
nostalgia for his glory days in show choir. Glee is quick, witty,
campy and feel-good, and features exuberant song/dance routines (to
Kanye songs!) and a wonderfully comic performance by Jane Lynch. There
are also some serious themes and storylines touching on everything from
marriage to typical high school self-esteem/bulimia issues. But mostly
this is a show that revels in popular adolescent tropes, high school
comedy convention and teenpop meaninglessness. Like most everything on
FOX, this show is fun to watch, but it won’t change your life.

Once ABC’s mega-hit Lost
ends for good next May, what show will we watch to satisfy our geeky
need for apocalyptic “WTF!?” ridiculousness? Well, ABC hopes it is FlashForward, the new drama written by David S. Goyer (Batman Begins) and Brannon Braga (Threshold) and loosely based on Robert J. Sawyer’s 1999 novel of the same name. Like Lost, FlashForward
weaves a tangled web of curious coincidences, overlapping storylines,
and a pause-your-Tivo attention to details. But the intrigue of this
show is on a bigger scale than even Lost. The premise is that
everyone on the planet blacks out for two minutes and 17 seconds one day,
and in that time they all see their own future at a specific date five
months from that moment: 8 p.m. on April 20, 2010. Chaos ensues for a
number or reasons. When everyone on the planet blacks out for two
minutes, in the middle of surgeries and plane flying, things get ugly.
Millions across the world die (Left Behind style). But then, the
survivors who have seen their futures have to piece things together to
discover just what in the world (literally) is going to happen over the
next five months. Cue the existential questions about fate vs. free
will! In terms of sci-fi shows combining interpersonal drama and
head-scratching space-time continuum paradoxes, FlashForward (assuming it survives its first season) will definitely pick up the mantle from Lost. Though those are some massive shoes to fill.

V is this year’s geek-approved show that
hopefully-won’t-get-canceled-but-probably-will. The show is based off
a 1983 miniseries that aired on NBC. V stars Lost’s Elizabeth
Mitchell as an FBI agent who confronts a new reality when aliens come
to Earth … and park their mothership over cities throughout the
world. The aliens (called Visitors … get it? V for visitors?) are led by Anna (played by Firefly‘s
Morena Baccarin) and first appear to be helpful, healing people using
their incredibly advanced technology. But appearances are clearly
deceiving. Add to the mix an Anglican priest who seems nervous about
the alien presence, some crazy post-apocalyptic graffiti and people who
join the Visitors as helpers (read: spies), and V is one of the most promising shows to premiere this fall.

God and the Tooth Fairy