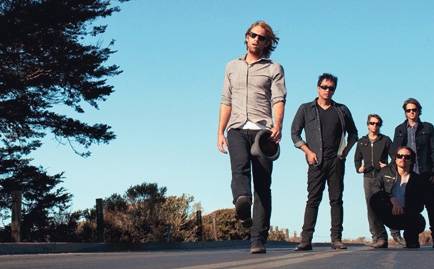 “It sounds incredibly selfish, but I write songs pretty much entirely for myself,” muses Switchfoot frontman Jon Foreman. “I don’t try and second-guess anyone else’s opinion. I just simply say: ‘Do I love it? And if so, then let’s chase it down.’

“I’m not sure if [the new album is] a gamble— if people will like it or not. It’s not a gamble for us at all from a musical standpoint. The integrity of those tracks, I feel, stands alone. Who knows whether people will like it? I love it. That’s where we’re coming from.”

Foreman’s words might be surprising coming from the frontman of a band that clearly loves its fans. But with their eighth album, Vice Verses, out today, fans will be surprised to find a heavier, funkier and more straightforward Switchfoot. That tension between keeping fans happy and being true to an artistic sensibility is merely the first of many contradictions that seem to define this multi-platinum-selling band. In fact, to truly understand the San Diego-based group, you have to start with the contradictions.

This is the (New) Sound

The collection of surfers (“switchfoot” is itself a surfing term) seems to exist in the friction created when two opposites collide. During their 15 years together, Switchfoot has teetered between the sacred and the secular worlds. They’ve received numerous accolades (most recently a Grammy for Best Rock or Rap Gospel Album) only to claim they ultimately mean nothing.

Now, at the height of their career, with millions of albums sold and a still-growing international audience, the band is going against itself—more specifically, going against their signature sound that led them to this point. Switchfoot—which includes Foreman (lead vocals, guitar), his brother Tim Foreman (bass), Jerome Fontamillas (guitar, keyboards), Drew Shirley (guitar) and Chad Butler (drums)—haven’t abandoned any of their instruments; they’ve simply allowed the bass and drum to move the listener in ways electric guitars can’t.

“One thing we were intentional about was finding a different rhythmic motor for the music,” Tim Foreman says. “We’re typically known for our crunchy guitars and being a guitar-driven band. I think for this record we tried to let the drums and bass drive the motor a lot more. It really has a different heartbeat because of that.”

Songs like “The War Inside” and “Selling the News” are even more of a creative jump for the band. The former could be found on an album by industrial rockers Filter. The latter, a mostly spoken-word track, sounds like Earthsuit reunited.

So, is Vice Verses their biggest sonic leap forward yet?

“I think typically, with most albums we make, you have that feeling of jumping off of a tall cliff with no net beneath you, and then a few years down the road you’re able to maybe see things more honestly,” Tim says. “With that disclaimer, I’d say absolutely. It really feels like we pushed ourselves to go to new places. I think for this record we chose to share some different colors than maybe we have in the past.”

Producer Neal Avron (New Found Glory, Anberlin, Yellowcard) and executive producer Mike Elizondo (P!nk, Eminem, Jay-Z) were both handpicked to brighten those colors and take the band to new places. The two helped Switchfoot create a sonic world for each song to live in before it wa
s recorded—a new process for them.

“We’ve never had that,” Jon says. “It’s always been, ‘Let’s record the song.’ It was a different experience for us all the way through. For me as a songwriter, it really pushed me as well. I think I was kind of unafraid to scrap things—to be even more ruthless with the editing mechanism and knowing a song is a song and they’ll keep coming. It was, ‘Let’s throw away the little fish and keep chasing the big ones.’ ”

Having their own studio meant they weren’t spending extra money required by the pursuit of new territory. Releasing their albums independently meant they didn’t have a deadline.

The result, Foreman says, is Switchfoot’s most clearly defined and realized album yet.

“Instead of just sitting out in the rain with a bucket,” Jon says, “I think we actually went fishing for what we wanted to be for the next couple of years of our lives.”

The album’s most delicate track, “Vice Verses,” is one Foreman describes as a personal question mark. It features little more than Foreman asking life’s biggest questions— as if he can’t move on until he receives an answer—while gently plucking his acoustic guitar near the high tide line of a hometown beach.

The early morning high tide line, Foreman says, reveals all the debris washed ashore from the night before.

“That’s kind of how I feel every morning— some mornings more than others,” he says. “There’s a bunch of crap that the oceans of our minds leave up on the high tide line for us to figure out. That particular day I was wrestling with a bunch of stuff. There are so many things personally and in the news that are just really hard for me to deal with.”

Foreman’s questions float up, echoing into the song’s atmosphere—questions like, where is God in the global catastrophes of the day? And where is He in the turmoil of our hearts?

Foreman confesses his faith and doubts are tested all the time. Again, the tension where both are equally plausible is where the reality of each becomes clearer.

“There is no proof of one or the other, so we live our lives in the middle. In the same way, we’re breathing life and death at the same time. Who’s to say which is more true? That the glass is half-empty or the glass is half-full? That we’re living or we’re dying? As a thinker, I wrestle with these things in the songs.”

While the American church seems to be entering a new phase of living out its faith by focusing on social justice, Switchfoot has been doing more than sing about their faith for years. The band has long supported organizations like the ONE Campaign, Habitat for Humanity and Invisible Children. Jon Foreman was one of the first singers to wear a To Write Love on Her Arms T-shirt onstage.

In terms of modern American Christianity, Foreman says he does see signs of the Church doing more to improve the world it finds itself in, but he still can’t grasp why it takes so much to get it moving.

“We are creatures of comfort, and we’re so quick to forget the pain of hunger once we have a meal in our stomach,” he says. “I’m throwing myself in this category, too. It’s a travesty how quickly we forget these things.”

While Foreman acknowledges the need to lobby for the poor and the marginalized in society, he says, in many ways, the government is providing aid to the very people the Church has failed.

“The goal for the Western church should not be to get the government to do what the Church should be doing all along, but rather to be the Church and do what the Church is called to do, which is mainly give cups of water to Christ, give food to Christ,” he says. “It’s one of those things where, until we see the homeless lady on the corner and treat her like we treat Christ, then we’re just going to keep lobbying for some other form of justice, but justice can’t just be totally lobbied for—it’s something you live.”

Switchfoot, however, does see hints that the Church is getting its boots on and rolling up its sleeves.

“I feel like the next generation has a wide-open view of the world and is ready to try and actually change things and is stupid or bold enough to try,” Jon adds. “That gives me a lot of hope.”

What the Future Holds

Although Vice Verses is just releasing, the members of Switchfoot know they’re on a different course as a band. The future looks different now—and that’s exciting. Jon says the band is fortunate their fan base is still along for the ride. It’s been nearly a decade since their multi-platinum breakthrough album, The Beautiful Letdown, released.

“The people who come to our shows … I’m always struck by how ready for something new they are,” he says. “A lot of these people have been with us for 10 years. So much has happened in the last 10 years of my life. Everyone changes. Everything changes. To think that people are still excited about the next phase of what Switchfoot looks like, that blows me away continually.”

When they look back on their career years from now, they believe Vice Verses will surely be a bright spot—no matter where Switchfoot goes next with its sound.

Read the rest of this interview in the September/October 2011 issue of RELEVANT magazine. Got an iPad? Get more interactive features from this story with our all-new RELEVANT tablet edition!

Scientists Come Up with Environmentally Friendly Way to Kill Mosquitoes