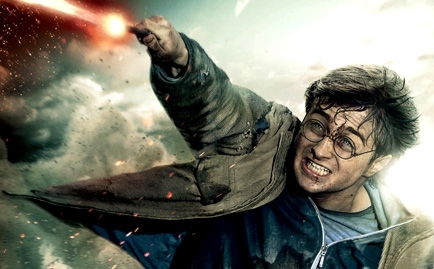 Really, This is No Weirder Than a Kangaroo

Even after seven books, seven movies and 13 years, people still can’t stop talking about Harry Potter. The boy wizard has managed to sell 450
million copies of books worldwide along with more than $6 billion in
worldwide box office receipts. A Wizarding World theme park opened at Universal
Orlando, and, even months after the grand opening, lines stretched for hours for the rides, shops and even the butterbeer. And, of course, Potter has attracted plenty of attention
(mostly negative) from the Christian world, where believers worried the
series’ emphasis on witchcraft might lead readers into Satanic or
occultic practices.

So what is it about Harry that’s made everyone go crazy for so long?

Well,
obviously there’s the story. And the writing. And the humor, the
action, the acting, the heart, the emotion, the magic … there are
plenty of reasons. But for Christians, there might be even more reason
to enjoy the Potter series. Because, whether some of the more vocal
minority want to admit it or not, Harry Potter and his story ended up being one of the
most explicitly Christian symbols in modern popular culture.

Before
I go much farther, I want to warn you: I’m going to be talking a lot
about Harry Potter and the Deathly Hallows, so if you haven’t read the
book or seen the latest film, you’ll want to pay attention to the “spoiler
alert" below.

Through
the course of seven books and eight films, readers and audiences have
followed along the journey of Harry and his pals as they attended the
magical school of Hogwarts and squared off against villain Voldemort and
his foes. Of course, there’s a lot more to it than that (ask any Potter
fan about Quidditch and prepare for an hour-long exercise in tedium),
but that’s the gist.

Along
the way, there’s been plenty for Christian Potter fans to point to when
trying to read the series with discernment. There’s the series’
constant support for the oppressed, the downtrodden and those without a
voice. Much of Harry Potter and the Goblet of Fire (at least, the book
version) is focused on the effort to improve the lives of the enslaved
house elves, and it’s Voldermort’s obsession with race purity that
almost directly leads to the possibility of his downfall. Hermione, one
of Harry’s best friends and the smartest student at Hogwarts, is
constantly belittled by the series’ villains as a “Mudblood,” which, in
the context of the world of Potter, is a derogatory term for a witch or
wizard of whose parents are normal humans with non-magical blood (or "muggles.")

The
series also emphasized the deep bonds of friendship and community.
Harry, Hermione and Ron Weasley remain devoted to one another as the
story progresses, confronting both physical and emotional threats. As
the characters are children for most of the books/movies, some of their
squabbles are silly, but, particularly in the books, J.K. Rowling’s
analysis of the ways friends hurt one another yet find forgiveness and
redemption provide a template for Christian relationship realized. The
way the characters care and sacrifice for one another is a compelling
vision of love in action.

One
of the first things readers learn about Harry Potter is that he was
nearly killed as a baby by Voldemort, but for some reason, survived after a killing curse hit him. As the series progresses, it’s
revealed that Potter was protected by his mother’s sacrifice—as
Voldemort tried to kill Harry, he first killed Harry’s mother, Lily,
who sacrificed herself in an effort to save Harry. That sacrifice
protected Harry from being killed by Voldemort until he came of age (at
the age of 17).

Sacrificial
love is referred to by Professor Dumbledore as an “ancient magic” that
Voldemort knows but is terrified of. Voldemort also underestimates the
magic of love that dies to save another. That underestimation continues to
backfire on him, as he’s unable to harm Harry while he lives under the
protection of his mother’s love.

Voldemort
also fears death more than anything else. He fears it so much he
separates his soul into seven pieces in order to gain immortality. In Harry Potter and the Order of the Phoenix, Voldemort has a showdown with
Dumbledore and exclaims, “There is nothing worse than death,
Dumbledore!”

To
which Dumbledore calmly replies: “You are quite wrong. Indeed, your
failure to understand that there are things much worse than death has
always been your greatest weakness.”

Dumbledore
proves his belief  there are things beyond death by sacrificing
himself in order to save both Harry and Draco Malfoy. His selflessness
is held up by Rowling as the pinnacle of love—and the fullness of the
“ancient magic” completely overlooked by Voldemort.

The Boy Who Lived

But
Rowling (like any good storyteller) saved the biggest moments for last
(remember that SPOILER ALERT warning? Consider it in full effect now.
Seriously. Stop reading).

In
2007, J.K. Rowling told reporters: "To me [the religious parallels
have] always been obvious. But I never wanted to talk too openly about
it because I thought it might show people who just wanted the story
where we were going." To people who have read Harry Potter and the
Deathly Hallows or have seen Deathly Hallows Part 2, this quote seems
completely obvious. Harry goes to a graveyard and sees two tombstones: On Dumbledore’s mother’s tombstone is written, “Where your treasure is,
there will your heart be also,” (Matthew 6:21) and, more tellingly, on his
parents’ tombstone is written, “The last enemy that shall be destroyed
is death”(1 Corinthians 15:26).

Later,
Harry sacrifices himself to save his friends … sound familiar? He
wakes up in an all white area called (seriously) “King’s Cross.” Then he
rises again and returns to Hogwarts to save his friends, deal the final
blow to the Evil One and put things to rights.

If none of this rings a bell, it’s time to pull out your New Testament.

Harry’s
life, death and resurrection are needed to break the back of evil and
death and restore the wizarding world to fullness. It’s an almost
on-the-nose Christ parallel so obvious it would be annoying … if it
weren’t so compelling. It’s as “obvious” and as moving as a lion
sacrificed on an altar who taps into an ancient magic of love
misunderstood by a wintry white witch. It’s as blatant and wonderful
as when a wizard falls to his death … and returns as Gandalf the
White to save the world.

In
the end, Harry’s sacrifice is a pale reflection of a much deeper and more
profound one that really did save the world, one that really does
promise to set the world to rights. But his death does what any great
Christian art ought to: Using a profound story, it provides a singular
glimpse into the Christian story that can both deepen and widen our
experience of faith.

The Most Terrifying Roller Coaster