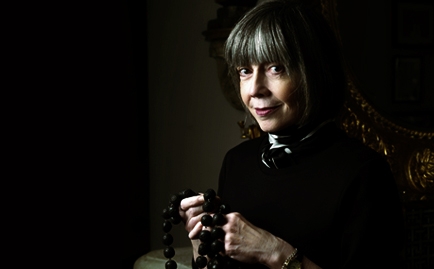 Anne Rice has spent her entire life caught up in a spiritual quest for truth. Yet she has carried on that search in a highly public and creative fashion, creating novels rooted in indelible portraits of evil and lost souls throughout her 11-novel series about the Vampire Lestat before tossing that vastly lucrative path aside to write novels in which Jesus and holy angels are the heroes.

It’s been a rather unique full-circle journey for Rice, who grew up in a devout Roman Catholic family in New Orleans before questioning her beliefs upon attending college out of state in Texas.  Yet Anne didn’t rebel in the conventional sense of those around her in the heyday of hippiedom; she was a few years older than that generation and decided to question things on an intellectual and philosophical level rather than through the use of drugs.

But even as she eventually came to describe herself as an atheist and had great wealth and adulation, Rice wasn’t truly happy. In 1998, she started to rediscover her strong faith by rejoining the Catholic Church, and by 2004, she announced that she would no longer write about vampires. Instead, she was devoting herself to “what the Lord wanted” in her writing.

“The answer to why I switched is my personal conversion. I didn’t really have the same worldview after that conversion,” Rice explained in an interview from her home in Rancho Mirage. “I didn’t have any more tales to tell with [the vampire] Lestat because I now saw the world through different eyes and the vampires didn’t make a connection for me.

“Vampires were people groping for faith, living through darkness, and I personally found the change those characters were looking for,” Rice adds. “I came to the end of my quest. The last two [Lestat books] reflected the split in me and were written after I’d been writing in faith.”

Rice’s latest novel is Angel Time. The book tells the story of Toby O’Dare, a contract killer assigned to yet another murder who is visited by a mysterious stranger—an angel who offers him a chance to save rather than destroy lives. When he agrees to take that chance, he is whisked back to 13th Century England, amid an era in which children suddenly die or disappear and accusations of ritual murder have been made against Jews—a dark world in which he is determined to bring light.

“Both vampires and angels challenge the imagination. You have to live up to a classic concept, with angels they’re a creature who’s a messenger of God who comes from Heaven ,” explains Rice. “So you think: ‘what’s he going to sound like when he talks, what’s he going to say?’ It’s exciting to me, to write about angel Malchiah and make him believable to my audience.

“We have to respect what they are. Angels are messengers of God and live in the presence of God, but over and over in Hollywood movies, they’re made into sad figures who want to be on earth instead of Heaven. My angels want to be in Heaven. It’s kind of thrilling and very similar to writing about vampires.”

Rice’s shift away from faith was one that is common on the nation’s college campuses, even though she now feels it was “tragic” for her life. For despite her vast wealth and a happy 41-year marriage to Stan Rice, a lifelong atheist who died in 2002, she wishes she had never walked away from her beloved mother church.

“I went through a crisis at 18. I was at a secular college campus in Texas, away from my Catholic roots and had a whole host of new influences,” recalls Rice.  “I rejected the faith of my childhood as too limited. I wanted to learn what the modern world was about. I ended up styling myself as an atheist, but was really agnostic. As Catholics we encounter a whole lot of new information, and we don’t know how to incorporate that into our faith.”

Rice particularly recalls her first readings of existentialist writers like Jean-Paul Sartre and Albert Camus as leading her astray, but with the wisdom of time now says “it isn’t necessary to leave your church in order to read Sartre or Camus, but when I was 18 it didn’t seem that way and that I had to leave and seek knowledge a different way. It was a tragedy.”

Rice ultimately decided to return to the Catholic Church but also came back with a strong sense that she was supposed to write about Jesus Christ now and devote all her future work to Him. She feels that even her vampire novels were reflections of the search for the great truths of existence, just from the dark flipside of the path she walks now.

“There was not a specific incident that sparked my return to the church. I’d been thinking a long time and one day I made decision to go back, and realized I didn’t need answers to all the sociological questions I had,” explains Rice. “God had the answers for what was the meaning of the Holocaust or why was there a Second World War? And that was enough. That burden was not for us. It was a release to let it go but it was also intellectual. Americans tend to believe in that story that you turn towards or against faith due to tragic loss, but that never happened for me. They’re always casting my story in those terms but it didn’t fit.”

Ultimately, Rice has been pleased that some of her old fans have followed her new direction and tries not to concern herself too much with those who haven’t been as kind about it. She drew particular ire from some fans on Amazon.com for her Christ-centered novel Blood Canticle, and wound up attempting to defend herself in writing—only to find Amazon pull her response down without explanation.

“I don’t disavow my past books at all. I have communication with my followers everyday, and love their feedback and comments,” says Rice. “I hear a lot from fans who are curious and searching for faith. I get a lot of emails about my conversion—how did you do it, what do you believe in? I spoke at a synagogue about Christ the Lord outside of Birmingham, and people asked ‘how did faith get back to you?’ Sometimes it’s hard to express how complicated it is.”

Do We Really Need Another Worship Song?