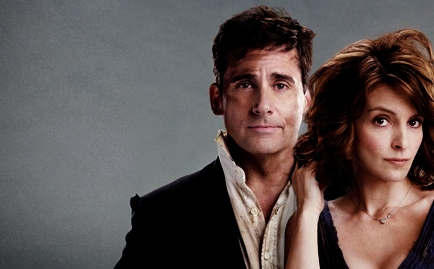 The new movie Date Night (directed by Shawn Levy) pairs two of TV’s hippest stars, Steve Carell of The Office and Tina Fey of 30 Rock. The pair play a suburban New Jersey couple out on their weekly "date night" who wind up being chased by crooked cops in a race for their lives due to mistaken identity. The film is a great deal of silly fun, but underlying its premise is a subtle exploration of how even a good marriage can go stale and the importance of keeping even the most seemingly secure of relationships fresh and exciting. Carell, Levy and Fey talked to us about dating, high heels and learning to be famous.

Tina and Steve, you’re both married. Do you have date nights?

Fey: Maybe once a month my husband and I get out. It’s a real effort, it’s usually very late at night and if we get more than 10 blocks from my house, it’s a miracle. I’m always exhausted. Carell’s had tons of weird stuff happen?

Carell: We’re always happy to get invited to award shows, but that’s it. Just the thrill of getting dressed up. Once it’s 10, we’re wiped out. If you have kids you know you’re in trouble, trying much later. The kids are up at 5:30 and so are you. Generally our best date nights are very very simple and we spend a good deal of them talking about our children anyway.

Steve, you’ve made many movies while The Office is on TV and Tina, it seems you film one once every two years. Are either of you looking forward to having movie careers after your shows are off the air?

Fey: About once every two years is all I can handle because being the creator, my year at 30 Rock starts in the middle of June and all the way to March. I want to write more movies, but with films it’s just for fun now and we’ll take it as it comes.

We know NBC’s having a little bit of trouble these days. Do they get a bulk rate for loaning you [Carell and Fey] out to 20th Century Fox?

Fey: First, just say thank God [they’re] having trouble or my show wouldn’t be on the air.

Carell: Neither of us.

Fey: And the Fox advertising money is helping NBC out some, so that’s good.

Tina, once they take your bag away, you had no props. How hard was that?

Fey: Once I lost my purse and coat, it was just me and my arms and the night. I was trying to hide my arms the whole time behind things like doorjambs. The only thing they didn’t take was my high heels.

Levy: Because of course you’re going to be keeping your high heels on when you’re running for your life.

You didn’t really wear your heels the whole time, did you?

Fey: I took ’em off when we were in the car, I’d cheat a little bit. And we had a few grandma sets where I could fit in without them. Carell built all the shoes, so the reinforcement was amazing. He’s also a cobbler.

Did this movie come out of a longstanding desire to do something together?

Carell: We were both offered, and our interest was weighed initially. We spoke on the phone to see how we get along. Tina said, "Wouldn’t it be fun to be hanging off a car in the middle of New York City?" I said, “Yeah!” When I heard she was involved and Shawn was the other component, I signed up.

Fey: I liked the idea that it was married couple, grown up, because that’s who we are. At a certain point you can’t do a movie about your wedding, and I thought this is a movie my husband and I would go see.

Steve, you’ve been a movie star for a bit longer than Tina. Was there anything you taught her about being a movie star?

Carell: Yes, I taught her about attitude, and there’s no pretense about her, so I taught her pretense. I don’t think either of us think of ourselves in that movie star realm at all, and Fey doesn’t need any advice from me.

Fey: This is like an enjoyable and very long-sustaining prank that I’m pulling on the American people.

Tina, how did you learn to dance so ridiculously in the big scene?

Fey: We made a decision not to plan it.

Levy: Not to even hire a choreographer.

Carell: It would’ve been too good.

Fey: I forget if it’s the part where Steve carries me around … But we only did two long takes, and the first take when he carried me around I forgot and let go of the pole, so he was yelling, "Hold the pole!" I knew I could count on Carell to deliver, and one of my favorite things in the movie is Steve licking the pole and then becoming nauseous. I’d like to say we went to a bunch of strip clubs and really studied, but we didn’t. I also wanted this movie to feel at the top of its intelligence in dealing with marriage and each other, worn down by everyday lives and the struggle to come together, and this night sparks that.

Levy: Some of the easy ways to do this movie is "they’re on the cusp of divorce and here’s one last try" or they’ll move to the city, but no they wouldn’t do that. They’re still suburban and I had to keep it nuanced, no matter how crazy their lives ended up being.

Do you have any advice for real-life couples to keep things exciting, Steve?

Carell: Every relationship is unique, so there’s not a lot of advice to offer. With my wife, Nancy, and I, there’s an open communication and lots of laughter. We just have fun with one another and never forget to stop that. That, and amazing lovemaking.