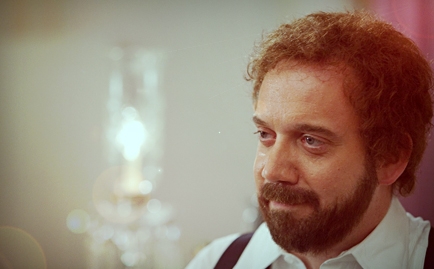 Paul Giamatti is one of the most unique actors working in films today, since he mixes a bug-eyed exasperation with an intense energy that can make him either immensely lovable or intensely annoying. Ever since he broke through to critical acclaim in 1997 portraying notorious radio host Howard Stern’s station manager and nemesis known as “Pigvomit” in the film Private Parts, Giamatti has become a frequent presence on the nation’s movie screens.

Despite his singular presence and offbeat appearance, Giamatti has been particularly strong in movies where he plays real people, whether in Private Parts, his starring turn as the depressed cult cartoonist Harvey Pekar in the 2003 film American Splendor, his Oscar-nominated role as a Depression-era boxing manager in 2005’s Cinderella Man, or his most famous role to date—the romantically hapless wine aficionado in 2004’s superb comedy Sideways.

Giamatti is in theaters nationwide in two movies now, as his Golden Globe-winning performance in Barney’s Version—based on a novel by Mordecai Richler about a man who always has his own version of the truth and who finds true love on his third marriage—is slowly leaving theaters. His newer film is Win Win, a character dramedy centered on the world of amateur wrestling and male bonding, and it opened Friday in limited release before rolling out wider in the next month or so.

Giamatti sat down recently for a one-on-one interview with RELEVANT. Actually, "sitting" is the wrong word, for the actor is in constant motion—checking texts and pacing while engaged in conversation. It’s clear that the live-wire intensity he shows onscreen is rooted in his real-life mannerisms.

Your character of Barney really wears his heart on his sleeve.

Giamatti: He’s actually a character with a very large heart, a very full heart. He’s a very complicated kind of guy with a very self-destructive streak in him. He’s a no-bull kind of guy. He’s blunt and forthright, but underneath it kind of a mess. I think he’s very interesting.

How does Barney change from his first marriage to when he finds what he’s looking for with the third?

Giamatti: He’s definitely trying to reinvent himself every time, but the third marriage is the authentic one. He’s becoming more authentically who he is. He’s a difficult man and a bit of a wreck, but he can be that with her even as it makes for a difficult life. But he’s becoming more himself, which is difficult because he wasn’t being honest with the first two wives.

Were you familiar with the original novel by Mordecai Richler?

Giamatti: I knew of it, but hadn’t read it. It was based on what really happened to him—he married a woman who became the love of his life, but he met her at his wedding to a prior woman. I hope he would have liked what we did. You always strive to honor someone’s intentions.

What is the dynamic of Barney’s relationship with his dad, played by Dustin Hoffman?

Giamatti: That’s one of the things I really liked about the script. They’re almost complicit, like siblings, or naughty boys. His father sees him as he really is and loves him just for that, and vice versa. Barney’s not shallow because he always defends him staunchly.

Win Win is a different kind of role for you.

Giamatti: Right, he’s a normal guy. [Director Tom McCarthy] had to keep steering me away from going to the offbeat places that weren’t right in this case. This is a guy who’s very up, no matter what happens to him. He doesn’t have those nooks and crannies that a lot of my characters use to hide in. It was a real challenge.

And the film has a great male friendship at the center of it.

Giamatti: Yeah, you don’t see that a lot in movies. These guys have known each other since high school, so they can open up to each other. He’s got the money, but I’ve got the family. His energy and knowing humor is a great for a guy like me who can’t get kooky.  And each serves a need for the other by having these opposite qualities.

Did you learn anything about wrestling by making this movie?

Giamatti: That you can’t really hit people in the head with a chair in the actual sport.

Speaking of sports, your father was the commissioner of major league baseball for a brief time in the late ‘80s.

Giamatti: I never really took advantage of the perks the way that I could have and maybe should have. I had a real love of baseball that my father instilled in me, but I was much younger then and thought I’d have a lot of time to see the World Series and playoffs with him. And then you suddenly have that time taken away.

Giamatti: It’s always an interesting challenge to play a real-life person, because you want to do that person justice. I was lucky to get to know Harvey, who died a couple years back, and really get to ask and see what makes him tick. And thankfully that turned out to be a role in which I was able to show I could carry a film on my own, that I wasn’t just a supporting character actor.

In Splendor, you got to spend time with the real Harvey Pekar. How did you manage to pull off as strong of a performance as John Adams [an Emmy-winning role in an HBO miniseries]?

Giamatti: Well of course, I couldn’t speak with him or his family or friends. But there’s certainly plenty of historical records and writings around. You just have to dig in and read as much as you can about someone like that and try to make them come to life.

The Serious Side of Parks and Recreation