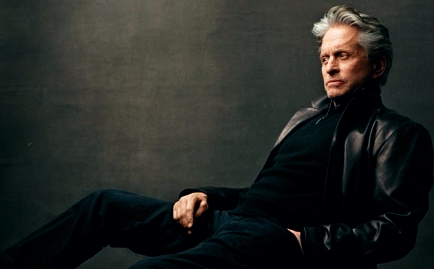 Michael Douglas has long been one of Hollywood’s most powerful players and compelling actors, nearly always providing moviegoers plenty to think about in movies that were solidly structured on compelling and morally complex plotlines (Basic Instinct being a big exception, for obvious reasons). Whether taking on adultery and the symbolic threat of AIDS in Fatal Attraction, ruthless financial wizards in Wall Street (for which he won a Best Actor Oscar), the rollercoaster world of marriage (The War of the Roses), sexual harassment (Disclosure), or the psychic strains of overlooked middle-aged men (Falling Down), he has been the electric center of some of the best films of the last 30 years.

This fall, he’ll return to his iconic Oscar-winning role of Gordon Gekko in the sequel to Wall Street, but for now moviegoers who appreciate thoughtful, complex scripts and great acting over the usual loud and pointless summer fare should hunt down Douglas’ latest film, Solitary Man [editor’s note: check out our review]. Following the story of Ben Kalmen (Douglas), a 50-something New Yorker and formerly successful car dealer, who through his own bad choices lost his entire business and ruined his marriage.

The film depicts what happens when Ben gets one last shot at redemption, but its well-crafted twists and turns reveal there are no easy choices to be made in some lives. but it should be an easy choice for those lucky enough to live in New York and L.A. now, and other big cities in coming weeks, as Man rolls out in limited release. Others will unfortunately have to catch it on DVD, but it deserves to be a classic and is well worth owning and watching repeatedly.

Douglas sat down recently to discuss the film and had this to say.

What drew you to playing the role of a guy as messed up as Ben?

Douglas: There are lots of men my age in New York City who live like Ben Kalmen, and they think they are Gordon Gekko. This was really well written with great dialogue and characters and I loved its unpredictability and simplicity. I’d sum it up as a poignant comedy. What I love about the film is what I love about life; you laugh one minute, it’s emotional the next, it’s full of quirky characters and it’s got a lot of heart.

Also, Ben is a fast-talking, optimistic, go-for-broke working guy who never stops, particularly when he finds out his health may be in jeopardy. He just goes for it and gets most of his motivation from the opposite sex. He’s probably hit a certain age where health issues are a little premature, so he wants to make up for lost time.

The supporting cast of the film (including Susan Sarandon, Danny Devito, Mary Louise Parker, Jesse Eisenberg and Jenna Fischer) is unbelievable. What was it like working with Susan as your ex-wife?

Douglas: I’ve always thought we would have good chemistry on screen. I had been looking to work with her throughout my career but for some reason we had never found the right thing. She’s totally professional, wonderfully unpredictable and very intelligent. She’s a good listener and has all the qualities you would hope for in a good actress.

And how about with Parker as your girlfriend?

Douglas: You understand why she was cast her in the hit television series Weeds. She’s got this wonderful idea of thinking of something else when she’s talking. I really enjoyed working with her because she’s somebody that you lean into when you’re acting because you don’t know what’s going to happen next. She’s totally unpredictable and funny in that way. There’s definitely a quirkiness to Solitary Man and Mary-Louise helped fulfill that.

Danny Devito has famously been your real-life best friend since the ’60s, just as he plays Ben’s best college buddy here. What was that like?

Douglas: Casting Danny was the director’s idea and I supported it one hundred percent. There’s a reason actors like to work together because you don’t have to go through all the formalities. For Danny and I this was our fourth movie together so there was a huge comfort factor. He was just helpful and made it a better picture.

Solitary Man had the rare status of being written and directed by a two-person team, Brian Koppelman and David Levien (co-writers of Rounders and Oceans Thirteen). How did that dynamic work?

Douglas: You’re never really sure how two directors are going to work out but they were both softies which is nice as usually there’s a good cop and a bad cop.

As a fairly low-budget film ($15 million budget), you had to contend with a really short shooting schedule. How did you contend with that, and what was it like shooting in New York as well?

Douglas: It was a good workout, because I was in almost every scene. I didn’t enjoy the horrendous schedule and very fast past which put a lot of demands on me. But I always love working in New York because there’s an energy there that just keeps you going.

One night I went to dinner on the Upper East Side and saw three Ben Kalmen’s. These three guys, all with their hair dyed black, all wearing black suits and all with young girls on their arms. It’s a cash-only joint but who knows if they go back to a tiny studio apartment afterwards and if they are still living off the last of the money they made? Somehow they’re still hanging on to this persona, this image that was created a long time ago and that’s the portrait of our Solitary Man.

Maybe THIS Will Work