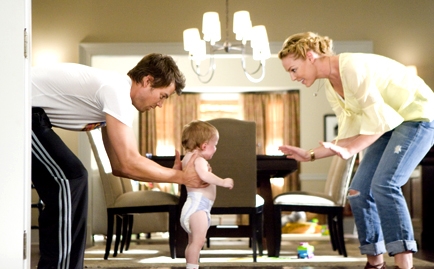 Katherine Heigl is one of the rare actors who has managed to establish a successful big-screen movie career at the same time as maintaining a major role on a hit TV series. After gaining stardom on ABC’s Grey’s Anatomy she’s become a star in her own right with Knocked Up, 27 Dresses and The Ugly Truth. She’s wisely trying to break out of the breezy romcom genre by starring in the somewhat weightier dramedy Life As We Know It opposite Josh Duhamel, whose career has followed a similar trajectory from the small to big screen.

With Life, the pair are teaming up to play two singles who have hated each other for years but are now forced to join together to raise a 1-year-old girl after the child is orphaned and her parents—the duo’s respective best friends—leave her care to them in the will. In dealing with death and the shift from irresponsible singlehood into hyper-responsible parenting, the film—directed by Greg Berlanti, a veteran TV producer/director who runs ABC’s hit series Brothers and Sisters—strives to dig deeper than the typically vapid films of the romcom genre.

Heigl and Duhamel sat down recently to discuss how their pairing came together and what they learned from making the film.

What drew you guys to this film?

Heigl: I was poring through material that was very romantic comedy driven. That’s my first love, and I go see all of them in the theater. I have a real fondness for them, but I was ready to tell a story that had a little more soul to it than just two lead characters in a funny situation who fall in love at the end. Their story came from a real tragedy, real sadness, real loss—of two people who had to rise to the challenge of a tough situation and do the right thing.

Essentially this movie is about two people whose mutual best friends die in a car accident, who had a 1-year-old they left in their care. The caretakers have a history because their two friends had a disastrous blind date years ago, it was really bad and they hate each other. They didn’t connect with each other yet had to be in each other’s worlds the last three years because their best friends were married. This tragedy happens and they’re thrown into this situation. It’s very difficult for them at first due to the loss of important people in their lives, but they grow as partners in raising this baby.

Duhamel: This script to me was special in a lot of ways. It’s very funny, but was also tragic and sad at the same time. A lot of times those are the best movies, because you can laugh and cry, and it has everything. And also it’s a movie I think people can relate to. Every mother can relate, and every man from single to fatherhood can. I love kids so it was a perfect opportunity, plus I’ve always been a huge fan of Katie Heigl’s.

My character works in TV, and is the guy who pushes a button after the director says, "Go camera 1." But he’s pushing to direct, he’s doing what he wants to do, but when he gets his shot and it doesn’t go as planned, it adds to his tension with [Heigl]. They did such a wonderful job constructing this story so it feels real. Two people not in love looking out for a kid—what would happen in this situation? It’s not about two people falling in love, it’s about two people just trying to make it work.

What was the appeal for you of working with Josh, Katherine?

Heigl: I’ve always loved his work, and known he’s a good person and a great guy. I thought I’d love the opportunity to work with him, and he’s perfect for the role here—it was originally written kind of messy, scruffy, a guy with a baseball cap, T-shirt and jeans. You think Josh Duhamel, and he’s pretty clean-cut and good-looking, but just because he presents himself a certain way in roles and the press doesn’t mean he can’t be a scruffy ne’er do well.

And how was working with your director, Greg Berlanti? He’s got a great reputation with actors from running Brothers and Sisters and Everwood.

Heigl: He’s been a dream as a director. We had a voice and got to participate in how these characters were and how they were presented. I didn’t have a dictator, I had a partner, just a funny guy who tells a mean story.

And what makes a script stand out to you?

Heigl: I know the stuff that breaks your heart is sometimes the stuff that moves you, [that you] are enthralled by and people do go to movies that move them as well as entertain them. I hope this movie has those beats and that people will come and share it with us. That they’ll feel connected to us in some way and the thing that I love best about storytelling is that.

Duhamel: If a film can reach a deeper meaning, that’s great. Here it’s not just Sophie the baby and Holly he’s dealing with, it’s the three of them together and he doesn’t realize how much he’s missing til he leaves it and that’s ultimately the biggest lesson he learns: that family comes first.