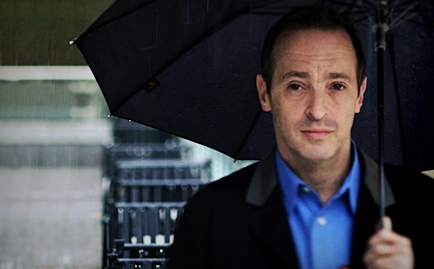 David Sedaris’ droll, honest essays are making America laugh— and at a time when the country is sorely in need of some humor. Since exploding on the scene with SantaLand Diaries—his account of 45 days spent toiling as an elf at Macy’s—and his reading of it on NPR’s This American Life in the mid-’90s, he has gone on to share the most awkward, intimate and hilarious moments of his life with readers and listeners. In a string of New Yorker essays and books that have included Naked, Me Talk Pretty One Day, Dress Your Family in Corduroy and Denim and When You Are Engulfed in Flames, he’s chronicled his family’s deepest secrets and his most crippling neuroses, which at turns is hilarious, cutting, cynical and touching.

But with his latest book, Squirrel Seeks Chipmunk, Sedaris has taken a different approach to his work. There are no personal essays here, but rather his own take on classic African fables centered on anthropomorphic animals who shine a light on the human condition. It’s a stark difference in his approach, but after 15 years of highly personal essays, it’s a change he feels he’s earned.

Sedaris recently finished a national tour to promote the book, and sat down with RELEVANT to talk about being an expatriate in Paris and England, his opinions on a broad range of sociopolitical issues and figures, and why he doesn’t share his parents’ Greek Orthodox faith.

Why did you decide to do a collection of animal fables as opposed to your usual essays about your personal life and people you know?

Somebody gave me a collection of South African folk tales on audio, and I was really looking forward to listening to it. But it was really awful and lame, and I thought, “I can do better than this.” So I wrote a story about a cat who goes to a baboon [to get groomed] for a party, and I enjoyed it. So I wrote another one, and another one and another one. And I go on these lecture tours every fall and every spring, and if I’m going to read in front of an audience for an hour, I won’t read one single thing that takes an hour—I’d rather read five or six things.

So every tour I’d write two or three of these and maybe read them out loud and all three of them or two of them would work, and I thought, “Someday I’ll use them all in a book,” and so it’s happened now.

You found your success a little later in life. You were an apartment cleaner and did odd jobs, including being a department store elf. Do you feel your writing came out better from having all these experiences?

I started writing when I was 20. My first book came out when I was 35. But I never expected that it would happen quickly. I’d been reading out loud on the radio since I was 28, had been doing it for six or seven years by the time I had a book. The largest audiences I’ve had, in Chicago, I was sometimes performing at [the popular Chicago variety show] Milly’s Orchid Show with 900 people listening. Then [This American Life host] Ira [Glass] put me on the radio for an audience of 10 million.

All of a sudden, when you’re exposed to a large audience like that, I think they think you just started writing that day, but I started years before. I look back at things I wrote then and I’m so embarrassed—the writing seems so blocky and choppy to me, and I wouldn’t have wanted success any sooner because the writing was even worse. I’m not embarrassed by the stories, but the writing itself seems choppy.

You used to live in France, and now you live in England. How has living overseas affected your perceptions of America?

It does make you see the United States differently. It makes you aware of how American you are when you’re living in another country. When you go to that other country, you realize that in France and in England you don’t ask somebody what they do for a living when you meet someone. A lot of the obvious things, the shortcuts we take in America—in America you can talk about money all you want. You can ask how much they make, rent they pay, how much their house costs and how much their car costs, and they’ll feel comfortable telling you. But it’s scandalous to ask anyone in England or France a question like that.

In America, if your next-door neighbor has a Rolls Royce, you want one, too. But in England, if your neighbor has a Rolls Royce, you want him to die in a fiery accident. That’s a quote from someone else, but there’s something about American optimism, that feeling you can do anything if you’re at least middle-class in America. If I can have a writing career, anyone can. There’s nothing special about me.

How do you feel about the major cultural shifts in the United States in the last couple years, with the election of Obama and the rise of the Tea Party? Does that affect your perspective in any way?

I was very excited about Barack Obama, but it was very discouraging to see the midterm elections go that way. I can get my British passport whenever I want to. I have my green card right now and can get my passport anytime. I can’t make the emotional break with the United States. After these elections, I wanted to say, “OK, you know what, I’ll become a British citizen and you can go to hell.” But I can’t do that, I just can’t.

America’s politics seem to ping-pong. Do you have hope that we can change it back to a healthier state?

It always seemed like a pendulum to me. But it just seems so many things now, the Republicans are against it when it could have been they were for it normally. But because Barack Obama endorsed it, they were suddenly against it. Maybe it was the same way under Bush, I just didn’t notice or pay attention as much. To tell you the truth, if George Bush was for morning, I would be against it. Every day that begins with a morning, I would say, “F— you” and think each day should begin with an afternoon.

I just got the Internet a few years ago—I’m the last person to get the Internet. I can only read news that validates my already-formed opinion, and how is that any different than my dad only watching Fox News? It’s not any different, and it’s not healthy.

Someone told me something recently about Sarah Palin, someone I trusted in the book business. They said, “I worked with Palin, she did an event at my bookstore, and she was really, really nice and even more beautiful in person.” I really didn’t want to hear that. I wanted to hear that she was awful and hideous-looking. But I thought: “I have to listen to that. I have to hear that.” I didn’t want to be that person who is going to deny anything complimentary said about somebody just because I disagree with them.

You were raised in the Greek Orthodox church. How did that upbringing shape you, and how do you feel about God today?

I never got the idea of a punishing God, just a really boring one. To see people growing up in the Carolinas who were Baptist, I knew there were others who felt God was going to send them to hell for any little thing, but not me. I didn’t feel like it, or like it influenced my writing style.

It’s rare to have two siblings who become offbeat pop culture icons. But that’s what happened with you and your sister Amy. What gave you such unique voices?

We’re not unique in our family. We’re more ambitious, but we’re not special. I’m not funnier than anyone else in my family. It’s just that we wanted more than Raleigh had to offer. If my brother wanted more than Raleigh had to offer, you would know his name. My sister Lisa has a really unique and different voice, but she doesn’t want that. She was a fine writer but never said, “I want a book, I want that kind of attention.”

I’m not an actor, and I don’t even feel like saying: “Let’s give it a try. I’m free next Tuesday.” I’m not comfortable in television at all. When a book comes out, you have to do some television, but I dread it. Last night I went on [The Daily Show with] Jon Stewart and Jimmy Kimmel [Live!]—lovely guys who you know aren’t out to screw you. But when I’m done, I’m done.