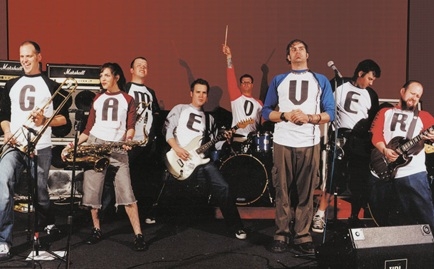 Hanson Releasing Their Own Beer

Denver-based Five Iron Frenzy was an important player in the third-wave ska scene of the 1990s. The band developed a cult following with their energetic live shows, eclectic musical style and goofy sense of humor. Which is why social networks ignited on Nov. 22—eight years after their final concert—when they announced their reunion and launched a Kickstarter campaign to raise money to self-produce a new album. Their goal was to raise $30,000 in 60 days; they accomplished this in 55 minutes. In just over a week, they’ve raised over $150,000, making it Kickstarter’s most funded musical project ever.

RELEVANT recently spoke with lead singer Reese Roper about the decision to reform, the prospect of making an album without a record label and what the future holds for the band.

RELEVANT: The last time we saw FIF was the emotional last show of the “Winners Never Quit” tour on Nov. 22, 2003. What have you been up to in the last eight years?

Reese Roper: Well, let’s see if I can remember. It was a dark and stormy night. We all got normal jobs. Some went back to school, some of us tried other musical projects, some of us became vigilante’s sidekicks. One of us is vice president of the United States.

How did the plans for the new album come about?

RR: While we were filming interviews for the Rise and Fall of Five Iron Frenzy DVD, released last year, Scott [Kerr, one of Five Iron’s original guitarists] asked me if I ever missed being in Five Iron. He missed the shows and the people in the band. Later on in that same conversation, he commented that he sometimes felt like it would be fun to play bass in a band. Keith Hoerig [bass] had already said that he didn’t want to be part of any reunion, but it hit me that maybe Scott would. So I pitched it to him, and he started writing. This went on for about six months, and then got bogged down with discussions on how we would write songs and who would do what. My wife and I had a baby girl in the middle of this, Scott and Andy [Verdecchio, drums] moved across town, and everything seemed to fizzle for about a year.

RR: I’m not really sure how it happened. Joel Gratcyk bought the address to our website and has been running it for about five years as a fan-site. This year he decided to make a countdown for Nov. 22, the anniversary of the day we disbanded, to relaunch a new site. He wanted to keep it a surprise, so it looked like there was just some random counter on the site. All of a sudden thousands of people were speculating that we were getting back together. Joel emailed us and asked us to draft some formal apology to explain what it was and tell everybody that we weren’t reforming. We were halfway through drafting it when it struck me: Why couldn’t we reform? So we planned out the free song, the possibility of touring and the Kickstarter campaign, and it happened. None of us thought it would be this big.

Is this a reunion?

RR: Yes, but we will look very different from how we were before. We are probably not going to tour out of a van. There may be less jumping involved. We traded Keith for Scott. The songwriting may be a bit more mature. But, yeah, we’re back.

We heard "It Was a Dark and Stormy Night" (available for free download) when you made the announcement last week. Do you have any other new material written?

RR: There are several songs in the works. We’re trying to get really good versions of everything demoed out before we actually hit the studio, which will most likely be in late 2012 or early 2013.

In the DVD, one of the main themes covered was the struggle between being labeled and marketed as a "Christian band" versus being free to reach a larger audience with your music. Did that play a role in the decision to make a self-produced album?

RR: Absolutely. That, and the fact that record labels have lost almost all their power these days. They still have connections with some radio stations, and maybe they can get your band on some late-night talk shows or on the shelf in Target, but those things never really worked for Five Iron anyway. The market is so hurting right now that you can get a great producer at a great studio for what it should cost ($20,000-$30,000) instead of some inflated price that was driven up by record companies raking in billions of dollars in the 1990s. It’s cheap to make music videos and to demo and record your own music. The only advertising worth investing in is cheap: fan driven, web-based, guerilla-type stuff and word of mouth.

We made $1.13 for every album we sold for a label that toured us into the ground as a means of advertising. Unless a label can offer us a lot better than that, we’re done with them. We may work out some sort of licensing deal, but not unless it’s really sweet.

How do you explain the unbelievable fan response?

Do you have plans to tour?

RR: Vaguely. We are definitely doing some festivals this summer. Our goal is to try and come up with a feasible way that we can play all of the big cities that we used to without losing our families or jobs. I think if we lost our jobs, our wives may not like us anymore. Notice I said “wives.” That’s because Leanor [Till, nee Ortega, saxophone] is married to Stephen Miles Till. He’s awesome, and wouldn’t care. But, yeah, we’re going to try to hit all the major U.S. markets, maybe Canada, New Zealand, Australia, South Africa and Europe.

You were known for addressing some pretty edgy topics for a "Christian" band. Should we expect to see the same in the new album?

RR: Heck yes! In droves. We don’t have a label! It’s on like Donkey Kong.

Finally, whose pants are these?

RR: Are they scrubs? Because they’re mine, and I need them for work.

TV Ownership Drops For the First Time in Nielsen History