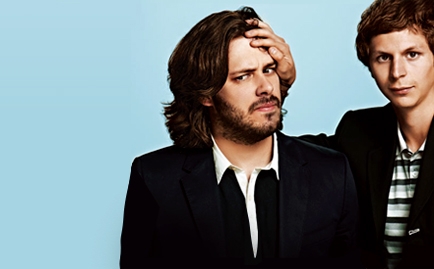 Movies have shown countless ways how young love can be won and lost. But no one has ever portrayed the magic of romance quite as, well, magically as co-writer/director Edgar Wright does in the new film Scott Pilgrim vs. the World.

Based on a graphic novels by Bryan Lee O’Malley, Pilgrim tells the story of its hero—a 22-year-old rather wimpy guy who knows how to shred a bass and manages to win and then break the hearts of seemingly dozens of young ladies in his hometown of Toronto. Scott himself has been mourning a breakup for the past year, and has retreated to going out with a 17-year-old high school student in a desperate attempt to garner even innocent affection.

But suddenly, he sees Ramona Flowers (Mary Elizabeth Winstead), a mysterious girl for whom he becomes utterly smitten. But when he asks for her number, she gives it to him with seven “X”s written underneath. Scott soon realizes these don’t symbolize kisses, but rather her “seven deadly exes” that he has to fight in wild fashion in order to truly win her over.

Speaking about the film recently in Los Angeles, Cera—who in this film, takes some refreshingly bold steps away from his usual one-note nerd persona—and co-writer/director Edgar Wright (who also did the zany cult classics Shaun of the Dead and Hot Fuzz) discussed the meaning of the film, the stretching Cera had to go through for the role, and the way in which the film’s hyperkinetic action sequences are really just the same as the dance scenes in Grease or a Gene Kelly movie.

Michael, was it a hard adjustment having to do big action scenes for the first time?

Cera: I totally started to take it for granted. You see rigs with people floating, hanging on wires. These guys doing amazing things. The whole stunt team, it’s amazing what they do with their bodies and how much control they have over everything. It’s really insane. Especially when I try so hard to make a punch look good, and they effortlessly do all this amazing stuff. It’s really incredible.

What drew you to this project and its take on love?

Cera: I just can’t think of any other movie with this kind of tone. Edgar and Michael and Brian with the books, in creating this world right off the bat you feel there’s a voice that the movie had that’s all its own. I think that’s really important with a comedy and Edgar does that with all his films. That’s the reason I wanted to work with him, is that his movie’s all have really distinct tones. This movie captured the tone of the book but had its own voice. It really grew and became its own thing.

Is it a natural transition from hopeless romantic to action hero in Scott Pilgrim?

Cera: This doesn’t feel like a transition, it feels like sort of a different thing. We had a lot of training in this movie, and a lot of time to be hanging out and getting to know each other.

Edgar, how did you decide to do this film after coming out of the gate with two big action-comedies?

Wright: I think me and Brian Lee O’Malley have a similar sense of humor and I did a TV show before Shaun of the Dead called Spaced with Simon Pegg, and I felt Scott Pilgrim was in the line with that sense of humor. Brian had never seen the show, but he watched it when I was brought on board and he saw the connection. I think it’s that thing of fantastical insane things coming out of an every day kind of story—the movie starts in a very real world to start with, and then flowers into something fantastical and crazy.

How did you juggle all the different aspects and moods of the film?

Wright: There’s a lot of layers to the film, and I made it very complicated for myself. It’s a comedy and a romantic comedy, but then it has action and music in it. Any time you have all four things and effects as well for the fantastical part, it’s a very complicated ambitious film and any one of those you’d have to keep an eye on just to have that. Having all four in the same film and usually in the same scene made for some very ambitious set pieces and was a lot to hold on to.

I don’t think I’ve seen anything quite like this. I’ve seen action  movies, comedies, and musicals, but never all in one film. I guess the previous movies I did before were easier to pinpoint: Shaun of the Dead is a riff on zombie movies, and Hot Fuzz is a riff on cop movies. But this is different, and what’s interesting is people’s reactions to the film and what they latch onto and what films they say it’s similar to is so wildly all over the place that it makes me happy they can’t narrow it down to one thing.

What was the key to making the fight scenes so unique?

Wright: The fight scenes I felt should feel like musical numbers when the emotion is too strong and people run into songs to tell the next part of the story. Here, the emotions are so strong that it breaks into fights and then goes back to normal. Just as in musicals, nobody says to Gene Kelly in Singin’ in the Rain “what did you just do?!” and in Grease after “Summer Lovin’” people don’t stop them and say “How did you choreograph that?” People don’t comment on what just happened. So with the fight scenes these things break out and at the end people in the background are too cool for school and go back to their own stuff.

How did you decide to work with Michael?

Wright: What’s great about Michael Cera in this part is that he has a very great comic persona and amazing sense of timing in this part and as an actor. But here he has situations that go outside his comfort zone. There are two things he does in the film very well—one he’s never done before, one he’s brilliant at. He’s an amazing guitar player, so he didn’t have to learn the way much of the cast did. You can see in the sequences where he’s playing bass that he’s really going for it. In the scene where he’s singing to Mary, he’s really playing and singing to her. On the flip side, he’d never done a fight scene before. I think he was daunted by it, but almost a year after we finished filming he texted me saying “I miss the training!” Which I never expected him to say.

Ultimately, this film seems to say a lot about love underneath its flashy surface.

Wright: There’s a sadness and darkness to the girl which Scott can’t quite get a handle on her. But it’s a test of how much he loves her, for him to decide how much he’ll get beaten up for her.