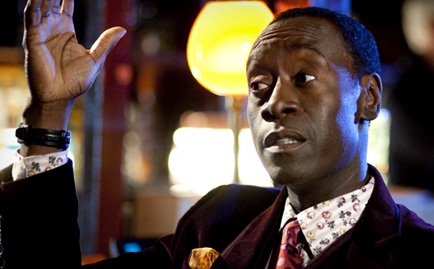 Now Your Car Can Get Hacked

Ever since his supporting turn in Paul Thomas Anderson’s 1997 Boogie Nights, Don Cheadle has established himself as a favorite presence—the kind of actor who may not make blockbusters, but whose films you know will be special nonetheless. He radiates a core of decency in roles like his classic Oscar-nominated performance in Hotel Rwanda (a film any socially conscious Christian should see). He exhibits boyish joy in the Oceans Eleven trio of heist films. Occasionally, he brings both qualities together, such as in the powerful and under-appreciated Reign Over Me, in which he starred opposite Adam Sandler in one of the few films to deal directly with the emotional fallout from 9/11.

But despite his always-engaging presence, Cheadle has steered clear of over-exposing himself at the box office. As he himself put it recently in an interview with RELEVANT, Cheadle places his personal priorities as a family man above maintaining constant career momentum.

That willingness to set his own pace in life is reflected in his role in The Guard. This time, Cheadle is an American FBI agent who shows up in small-town Ireland to help the local police confront an international drug-smuggling gang. He teams up with Sergeant Gerry Boyle, a small-town cop (“the guard”) played by Brendan Gleeson, who acts as if he’s fighting big-city crime with the bluster of tough-talking movie cops.

The pairing of a low-key, intellectual African-American agent with a small-town, prejudiced and very hotheaded white Irish cop is just one of the many delightful quirks in this one-of-a-kind (yet very profane) movie. Add a quaint setting, crackling dialogue, terrific plot twists and one of the most unique collections of oldies songs this side of a Tarantino film, and The Guard (written and directed by first-timer John Michael McDonagh) stands out as a must-see for indie-movie fans in a summer of cookie-cutter fare.

Here’s what Cheadle had to say about his work in The Guard, and why he gravitates toward these unique roles:

RELEVANT: In this movie, the more serious you played everything, the more the jokes landed and the better they were. Can you talk about tackling this kind of character?

CHEADLE: I think you hit it right on the head. When I read the script, the great contrast was this [uptight] character coming over there thinking he knows so much and kind of being arrogant; showing these local yokels how this works— "You just listen to the wisdom coming down from on high and you’ll be all right." He runs into this guy he thinks is a clown but actually knows more than anybody over there, and they form this relationship of inconvenience where he has to roll along with this guy because he’s actually got the goods.

This is a reinvention of the cop buddy movie. It’s very much Riggs and Murtaugh for the 21st century. How did you go about establishing the chemistry you and Brendan have?

It turned out to be very easy because Brendan is just a very easy person to get along with and very generous—especially once he starts drinking. He’s just really open and we have a very similar, sick, bent look on life, which we discovered in the first five minutes we sat down with each other. Then we kinda knew it was gonna be alright. The script was very fully realized when I read it and complete, which is rare. You don’t often get scripts that are that good, and I just knew if we didn’t mess it up, we’d have a shot at making a good film. You never know—there’s always an X factor, and I was an X factor to John. He’d seen my work, but did he know I’d do a good job in this? There’s always a fair amount of unknowns when you go into a film, but when you start off with a good script, you say, “OK, let’s start there and not mess a good thing up.”

You don’t play comic characters that much. Do you enjoy doing comedy?

Yeah. It’s where I started. I did standup for a minute before I became an actor, and then I got smart. I’m not all the way smart because I’m an actor, but I got more smart than in the time I did standup. I love comic acting, and now I’ve had the opportunity to do it onscreen. The industry comes to see you a certain way after people see you do one thing well. It’s tough to break out of that. It’s not typecasting, per se, but there’s more of a comfort level. “Can you even do it? I don’t believe you can do it.” Or [it’s]: “I’ll give it to this guy who I know does it all the time because I want the audience to be comfortable. So they’ll come for [him] and spend their money, so I can be comfortable in their money.” You have to find ways to mix that up, and that’s why I started my own company. When I see things that I think can change that perception, I want to get on board and do them.

It seems you choose to be in a movie every year or so, versus being someone who’s ubiquitously out there with five projects a year. Did you choose a separate career arc in that way?

No, and I never thought of it as a career arc until three or four years ago. Up to that point, it was just a hustle. It was like, "That job works, I’ll do it." Or, "That job may be more money, but I don’t want to do that part." I have a lot of criteria I have to consider. I have two children [who] I like and want to see and a wife I want to be with. I want to be a family man, and when the kids were little it was fine. We’d just take them all over the world, and wherever I’d go, they’d go. Things tended to work out seasonally, so I’d work in the summer, and they could come be in Italy for the summer cause I was there. But as they got older—my daughters are 16 and 14 now—[I don’t] want to take them out of their environment. They’ve got their own projects and stuff they’re involved with. It’s always a big balancing act. I’ve never been away from my family for more than three weeks total at a time, and it gets harder and harder to make that work. So, it’s a combination of everything; it’s that I haven’t read anything I really want to do, and I haven’t read anything that works with my life.

What does it mean to be a creative person for you?

I guess I don’t know how to be any different. It was probably something that was happening before I was conscious of who I was. My parents were very playful and open and play was encouraged in our house. I always thought everything was up for grabs as far as humor was concerned and everything was open when you were exploring and playing. The Cheadles were just playful people and it’s something that made sense to move over into a career, which I didn’t really pick. When I graduated from high school, I  was as into music and jazz as I was into acting, and I had a couple scholarships to pursue music and a couple to pursue acting. I think I made a weather choice and chose California because I was tired of Colorado winters—and then it turned into, “Oh, I’m making real money!”

Now Your Car Can Get Hacked