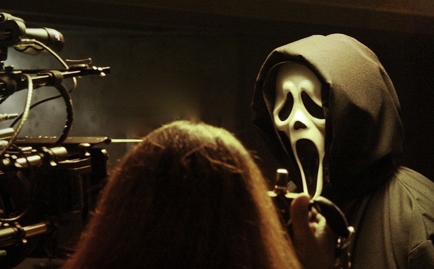 The Scream horror film series is one of the most unique in film history, not only for the fact that it maintained an intelligence far above most other horror films, but in that it has managed to hold fan interest for well over a decade since the first film’s release in 1996. Now, 15 years later and 11 years after Scream 3, director Wes Craven and his original core star trio of Neve Campbell, Courteney Cox and David Arquette (the latter two of whom met on the set of the first film and went on to get married) have reunited and brought the series back to life with Scream 4, a film I believe stands as the best in the series since the original.

The trio and Craven—who grew up in a strict Calvinist household and attended Billy Graham’s alma mater, Wheaton College in Illinois—reunited recently to speak about the film as well, in a press-day discussion held at the Standard Hotel in Beverly Hills. Here’s the rundown of their conversation:

Campbell: I love this character and doing these films always. The new cast came in with enthusiasm and their own fresh energy for the films. As actors they’re all professional and we didn’t need to teach them the ropes in any way and they did a great job.

All of you have been working together so long now, when you came back together on the first day, what was it like?

Arquette: I just love working with all these people because we’ve developed this amazing family, not only with each other and the director but with all this crew. We’ve shared 15 years together, it has been 10 years since we worked together. It really grounds it when I see Sydney’s character in the movies. You don’t really have that opportunity in most other films. Courteney, being married and having a kid—everything—intensifies the reality of it all and that’s my favorite part of acting.

Cox: It just felt very natural. First of all, we’ve had 10 more years of acting experience. I’m now a mom, so I’m a different person with a different perspective, but you get back into it easier since you know the role, but now it’s an older character with more experience, too. Wes was instrumental in us getting together, [and] is kind of our mentor in relationships and growing up. I became closer to Neve in doing this movie than in the first three. I adore that girl.

Wes, you were raised in a very strict household that didn’t allow you to see many films as a boy. What drew you to horror, and how do you think you came to be a master of this genre?

Craven: I could be making any kind of film. But it so happens that the first chance I got to make a movie, a scary movie came up and that’s how I got into it. Nobody asks me to make a romantic comedy. At first it was an opportunity to make movies, and there was a period in which I felt sort of entrapped, but then I had the realization I was working and directing, and how many people get the chance to do that? Also, I taught as a college teacher and taught Greek myths a lot, and realized horror films at the time were 20th-century mythology. Rather than looking down on it being embarrassed about it, I thought [I’d] treat it like that and make it the mythology for the current generation or era.

When I realized that, the films became multi-layered like Nightmare on Elm Street—playing around with reality and time—I became very proud of working with the genre. The audience is very smart and very adventurous. They’re people who can face fear, which a lot of people can’t, and even have fun with it.

Wes, I wondered if you directed the original cast any differently than the newer cast members, or was it all the exact same process?

Craven: I think we definitely do have a shorthand and the characters have developed their own arc. Sydney was a teenager in the first one. They are always changing, not just hers. They’ve all gone through these huge changes in their lives. That’s part of what makes Scream unique: people actually have lives and change who they are. Gayle Weathers decided to take the chance to marry Dewey and stay in the small town, and that’s fascinating to me. I think it’s extraordinary to be part of a drama that’s taken place over 16 years, I don’t know another film that has done this. And every new film has this young cast as well. We watch ourselves in the younger cast and see them develop, too. That all makes these films a lot more interesting and complex than not just most horror films, but any films.

Arquette: Wes is just incredible. It’s been a great experience, really going through life’s changes together. It brings a humanness to these films, another layer that makes it have an impact.

Neve and Wes, can you talk about how important it is to center the films on Sydney, rather than just the internal commentary and satire of horror? I think a big part of the films has been following her internal journey so much more than even most non-horror films follow a character’s life changes.

Craven: I think we’d all like to have the substance, honesty, lack of pretense and intelligence in an actress. I could just go on, but at the same time she had real illusions of what her family was. She’s had to go through so many changes and discoveries that it’s just fascinating to watch her play it. Learning about her mother’s sister’s kid in the third film—Neve really has all those qualities. She’s a champion ballerina, so she knew how to do all the athletic chase and fight scenes. In this film, she broke her foot but kept working through it. She embodies what you think of as the best of America.

When Scream hit in 1996, it was a phenomenon and the sequels came fairly rapidly. There’s been a decade since the last one, so has your perspective changed in making them?

Campbell: I feel we had to raise the bar somewhat again. The last one was a little goofy and Scooby-Doo, and we didn’t have Neve available as much as with this, making her more in the background at times. All of us felt like asking, What can make this really good and not just an easy money grab? Based on the audience reactions at screenings, the fact we put our all into it seems to be registering with people.