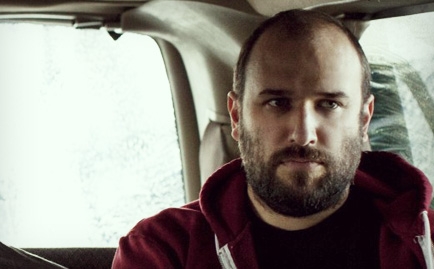 David Bazan has been making music that has infuriated, encouraged and challenged listeners for more than 10 years. His last album, Curse Your Branches, made waves for containing honest and heart-rending confessions about his loss of faith. His new album, Strange Negotiations, recently hit stores and contains the incisive lyrics he’s always been known for, along with the sing-along pop-alternative sounds that have made him an underground icon. We recently spoke with Bazan about the new album, if he feels at peace now and why he still feels a kinship with the Christian community.

A lot of people called your last album, Curse Your Branches, a breakup letter to God. How did the last album prepare you for Strange Negotiations?

I guess Curse Your Branches kind of made it so I was free to write about whatever. I think that with Curse Your Branches, as I was writing it, I didn’t know it, but I really needed to make a record that sort of spoke to all the issues in Branches, which it eventually did. And now that that’s kinda off the table I can just write a little bit about seemingly more random things. So it was really freeing to make Branches.

How did listeners’ reactions affect your songwriting approach after Curse Your Branches?

I guess I would say that it didn’t very much. I’ve been pretty lucky in that for whatever reason when I’m writing, I forget that people are going to hear it. I recorded an album with Pedro the Lion called Control in 2002 and once it was done I put it in the mail to my parents, and as I dropped it in the mail I realized: “Oh, man. There’s some pretty vulgar stuff on this record.” I just kind of get in a little cocoon where I’m definitely writing for the audience of me. I just assume that the advances I’m making in my mind, that everybody else is just sort of on the same page. It’s narcissism, I don’t know. [laughs] And then when the record comes out, it’s “Oh, that’s going to be weird” or, “Some people are going to be frustrated by this.” Maybe it’s just that I’m a bad strategist and I’m not thinking ahead enough. What it ends up doing is just allowing me to be myself on records, and not be very influenced by the pros and cons or the nays and yeas from fans or people.

One thing it did was I was really encouraged with Branches. It made me hopeful in people. I really thought that that was just my own trip that I was on, and it seemed like a lot of other people were either on the same trip or honest enough about their active states that the record was relevant to them. So that just made me hopeful about people and the state of Christian belief.

You seem to maintain an empathy and a kinship with the Christian world, even though you’ve stepped away from it. Why do you think it’s important to you to have a relationship with people who you disagree with?

The most real day-to-day motivator is that the people you’re talking about are my parents, and my parents-in-law … and I care what happens to them. Also, it’s just who I am. I think two years ago I would have been reticent to admit it or to accept that, but there’s a sense in which I’m a non-practicing evangelical. I understand the vernacular very well because it’s the way I grew up. I care what happens in the evangelical movement, and I’m hopeful that it becomes less and less destructive and distorted all the time, and when I see signs of that, it moves me because I care what happens. It’s easier for me to be open to relationships with people that I disagree with, because I would be more pluralistic or something. But I think that people can be open without forfeiting their own ideas and without endangering their soul according to their beliefs. It’s a hopeful thing, that dialogue can happen between those lines.

Sonically, is there anything new or different that you attempted on Strange Negotiations that you’re excited to present to your fans?

I think there are some different elements. I don’t really have a plan of like, “This is what I’m trying to achieve.” I just kind of get in there and go for it, and do what seems appropriate in the moment, and go for it. By default there ends up being a sonic “pow” that I didn’t really know was going to be that way going in. There’s a subtle refinement of a lot of different sonic elements that don’t really amount to anything new overall, but I think are more well done, to my ears. I like my band better. I like the people of my band. It’s been a long time.

You’ve walked through your internal battles, from the spiritual conflicts that you’ve worked through in your music to alcoholism. Do you feel more at peace now, in the present?

I do, very much. And I don’t imagine that. I mean, I imagine that there is an even deeper sort of peace available. I mean, there’s sort of the Christian mission that I grew up with that there’s either full peace or no peace, and I think that that’s … not true. I think that there are degrees of being at peace with oneself and one’s surroundings, and it comes from making good choices, in my mind, more than anything. But I feel more at peace than I ever have, and I think a lot of that comes from allowing myself to own my own thoughts about things, and just to be able to honestly explore. There’s just a freedom which, simply said, I think is just from being honest with myself.

In this honest approach that you take to songwriting, do you feel like you’re after catharsis, or reform or maybe a little bit of both?

Well, there’s an impulse to kind of get to the bottom of things in general that I feel personally, and I think my songwriting is just a pretty natural extension of that. And so, yeah, reform, catharsis: I think both those things are a result of getting to the bottom of things and trying to understand the underlying dynamics of what doesn’t work and what does seem to work.

People have called you everything from a prophet, to a poet, to a heretic. Who do you think David Bazan is?

Well, I’m a husband and a dad. I’d like to think I’m a practitioner of songwriting. I think it’s a pretty epic company to be in, to be able to call myself a songwriter. As far as the rest of the stuff, I mean, you just can’t take that seriously, the labels. Gillian Welch says, “Time is the revelator.” People are fond of developing or trying to develop a reputation, and then trading on that reputation, and I just think that’s a waste of time. You are who you are, and any given point in time will tell what the sum of your activities and your personality are. People can say whatever they want; I’m curious to see what happens.

More than 5,000 Evacuated in Arizona

When Being #1 Isn’t So Good