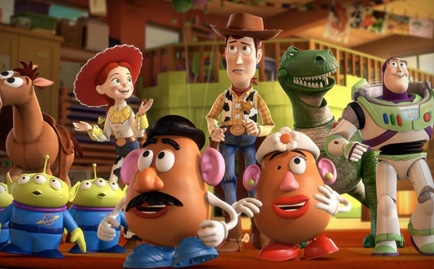 Somewhere in America right now, there is a 5-year-old kid mimicking the voice of a tow-truck named Mater, while his baby sister runs around him in circles, doing her best impression of Lightning McQueen. Suddenly, the little boy changes his mind because he wants to be the red sports car instead—and his playmate happily agrees to be the lovable sidekick, as she adores both characters equally. But don’t we all?

These two tikes are not alone in their enthusiasm for Pixar movies. Millions of kids (of all ages) passionately embrace each of their animated feature films, including such contemporary classics as Toy Story, A Bug’s Life, The Incredibles, Monsters Inc., WALL-E and Up.

This weekend, Disney and Pixar are releasing Cars 2, the next installment in their CGI-animated franchise. Coincidentally, the release of Cars 2 arrives with the 25th anniversary of Pixar Animation Studios. Regardless of reviews, it doesn’t take an industry analyst to predict that Cars 2 will likely be another Hollywood blockbuster. Just a surface-level glance at the commercial success of the previous 11 Pixar films is enough to convince me to buy as much Disney stock as possible. With an average gross of more than $602 million each, Pixar holds the top studio average in the movie business. Every Pixar feature film to date ranks in the top 50 highest grossing animated films of all time, with Finding Nemo, Up, and Toy Story 3 slipping into the overall top 50. And their success is not only financial: Since the original Toy Story, Pixar films have garnered 26 Academy Awards. Not bad for a studio that’s the same age as Lady Gaga.

So the Pixar parade continues, and the crowds are endlessly entertained. But why? What does Pixar know about us, young and old, that gets us to line up to unlock our imaginations and our wallets every time they release a new film? And why is it that the animated films of Pixar resonate so powerfully with so many different people?

We can’t solely pin Pixar’s success on the Disney marketing machine, the corresponding product lines or the theme park tie-ins. No, the success of the Pixar canon is rooted in the quality of their craft, and their ability to consistently do what great art has always done—tell great stories.

Bugs and Bots and Rats—Oh My!

The essence of a great story is a character overcoming trials to attain a goal. In each Pixar tale, endearing characters navigate a challenging journey that ultimately makes them better: Sully and Mike, the furry, working-class monsters; Dory, the memory challenged tag-along fish; Remy, the sewer rat with an affinity for French cuisine; Mrs. Incredible, a super-stretchy housewife/mom/heroine; Buzz Lightyear, the misguided space toy unable to accept his own limits. These are but a few of the innovative character types Pixar has come up with over the years.

But what makes these characters such successful protagonists is not their shiny spandex or catch phrases; it’s their humanity. Whether they show up as a helper robot or a rehabilitated great white shark, the fictional Pixar characters always reflect real-life human frailties. Yes, Mr. Incredible is incredible—but he also experiences a mid-life crisis. Yes, Lightning McQueen is the coolest car on the Piston Cup circuit—but he’s a jerk with some serious growing up to do. And yes, even Woody, who is perhaps the most likable guy you’ll find in the toy box, has his faults. Jealousy, anger, selfishness … they’re all there.

These flawed protagonists win the hearts of young and old with their three-dimensional personalities. Maybe their stories play out in an animated reality, but they connect with us because they are us. We are the “underdog,” the “has-been,” the “aspiring artist,” the child who “swam off” to do it on our own, only to find ourselves in great danger.

The Proverbs of Pixar

Each Pixar feature has its fair share of primary colors and pratfalls, but underneath the monsters and race cars, you’ll find strong themes and valuable lessons. By illustrating sincere and timeless truths, Pixar has found a singular recipe for success in an industry that often fails to produce quality entertainment.

CBS: All Reality Shows Casts Will Be 50 Percent People of Color From Now On

Let’s take a look at some of the many moral lessons Pixar has presented over the years: Throughout the Toy Story trilogy, we’re reminded that friends stick together and love one another despite their differences. A Bug’s Life is all about the little guy, encouraging viewers to think and stand up for themselves. The hilarious Monsters Inc. quite literally illustrates that laughter and love are far more powerful than fear. Finding Nemo tells the story of a father’s love that overcomes an entire ocean to reunite with his son. The Incredibles is a glossy ode to reaching your full potential. Ratatouille shows why it’s worth it to follow your dreams—as long as you don’t forget where you come from. Cars is a screeching reminder that pride still comes before a fall. And though there is hardly any dialogue for the first 30 minutes, WALL-E masterfully speaks volumes about the importance of stewardship.

Perhaps the most impressive aspect of these “Pixar proverbs” is that they never cross over into being heavy-handed, but are painted subtly and beautifully. As I think back through each of the Pixar movies, it is Up’s 12-minute opening montage that remains the highlight of the team’s storytelling. We watch Carl and Ellie meet as children, fall in “like” and then in love, marry and grow old together. In that short, Michael Giacchino-scored opening act, we see the characters’ best and worst characteristics unfold—clumsy, but brave; optimistic, but humble; hard-working, with a creative bent; committed to one another in love—and yet, not even torn apart by the reality of the impermanence of life. It is a truly moving (and tear-jerking) portrait of life and love, painted in delicate digital brush strokes by craftsmen at the height of their art.

Overall, there are two common themes that seem to creep into each unique Pixar universe in some form or another—that relationships are more important than possessions or achievements, and that life is more about the journey than the destination. Ultimately, these are themes that drive the work of Pixar itself. Instead of taking shortcuts, they’ve taken time to bond with their characters and their audience through stories both fantastical and relatable. And sure, we all want to get to “Paradise Falls” or the “Piston Cup Finals”—but how we get there and the friends we make along the way are just as important, if not more so.

What is your favorite Pixar movie moment, and why?

Austin Sailsbury lives, writes, and works in Copenhagen, Denmark. You can follow him on twitter @austinsails and at his blog Wayfarers All.