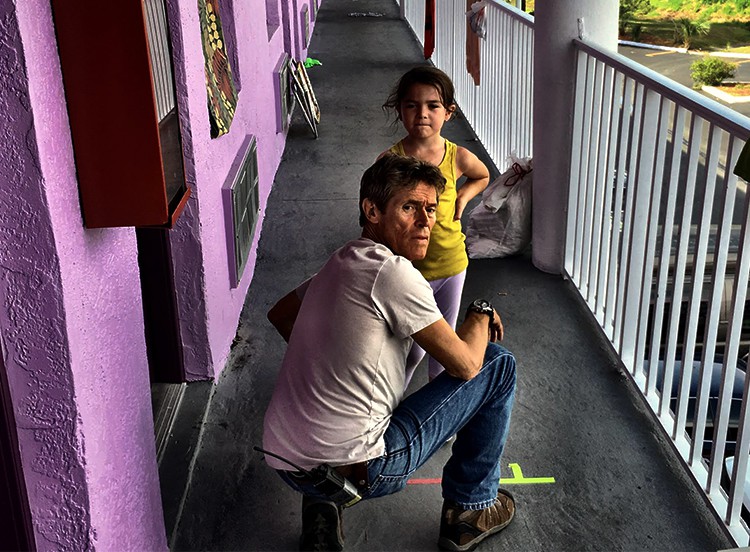 Hollywood loves sad movies loosely based on true stories. Oscar-winning films like the abuse-survival tale Precious, the 2016 Best Picture winner Room, about a kidnapping victim, may not be straight-ahead biopics, but both stories were pulled from the headlines and spun into fiction.

The Florida Project may follow a similar trajectory but with a different tone. Set in the schlock district of rakishly decorated motels built in the 1950s to house Disney World around Orlando, and Kissimmee, Florida, the story follows families who have fallen below the minimum score to rent an apartment and are stuck in a cycle of poverty that includes living indefinitely in cheap rent-by-the-night rooms that have long since fallen out of favor with tourists.

What sets this story apart is that filmmaker Sean Baker (2015’s award winning Tangerine) sets a very different tone. Inspired by Our Gang, the Depression-era TV show that gave the world The Little Rascals, which showed childhood resilience and happiness amidst the struggles of poverty.

From front to back this is a movie about joy amidst struggle.

Baker made a name for himself for shooting film festival hits (Tangerine and Take Out) exclusively on iPhones, so it’s no surprising that he casts A-lister Willem Dafoe (in one of the best performances of a standout career) with local Orlando area residents.

The narrative follows Halley, a stripper/prostitute/waitress, and her 6-year-old daughter Mooney, as they struggle week to week to eat and avoid eviction from their cheap motel room home.

To cast the part of Halley, Baker turned to Instagram, where he discovered Bria Vinaite. Originally from Lithuania, Vinaite had been using the social network to build Chronical Designs, a clothing company dealing marijuana-inspired apparel. “It wasn’t like I was looking at just photos,” Sean says. “She had video up there, and that was enough for me to sort of get a sense of her persona, her voice and her sense of humor.”

The original Little Rascals production, Baker’s muse for the movie, was innovative in putting children on camera and letting them be kids rather than try to force them to recite the script verbatim. The Florida Project takes a similar feel, thanks to both Vinaite’s acting debut and Brooklyn Prince, a 6-year-old Orlando native who steals the show by just being a kid.

The result is a movie that blurs the lines between fact and fiction, documentary and feature film, telling the story of childhood elation and adult struggle, in a motel where this happens every day and featuring dozens of extras who live within miles of the set.

Even Willem Dafoe scaled back to fit the tone of the movie.

“In this case, my biggest job was to fit in with the real people and real place and pass in a non-actor performance,” Dafoe told the YouTube show Build Series.

WHEN CHURCH AND MOVIES WORK TOGETHER

Until he was approached about doing a movie about the long-term residents of Florida motels, Baker admits he never imagined homelessness could take this form.

“We think of homeless people as literally on the street or packed in shelters in metropolitan areas,” he explains. “I honestly did not know there they were hundreds and thousands of them are living in budget hotels. And the recession of ‘08 has had a very lasting affect on many communities throughout the United States, and in particular Orlando and Kissimmee.”

What makes it harder to fathom is the current strength of the American economy, which has never looked better post-9/11. With a thousand-dollar iPhone being released next month, low unemployment and a sky-high stock market, it’s hard to imagine that a very large group of people have never financially recovered from the great recession of 2008, stuck in a cycle of week-to-week bill paying with few options to rebuild credit scores and return to their families to traditional housing options.

“You have kids that were born into this situation,” Baker says. “There are kids who are Mooney’s age (around six) who have never known anything else. In our research process, we met children who never knew any other life they just literally grew up in those hotels.”

Fortunately, there are nonprofits working to help motel residents rise above poverty. During filming, Baker was introduced to Hope 192, a Christian nonprofit that works with local churches to help the hidden homeless along Osceola County’s Rt. 192 corridor.

“The community is tight and they are working to help eradicate this situation.” Baker says.

Part of the problem in helping alleviate poverty in the area is the fact that fundraising is more difficult when the general population doesn’t know “hidden homelessness” exists.

It’s a complicated situation, one that’s easier to watch in a movie than to understand by reading stats on a page. The Florida Project is the first attempt to shine a light on the people who are living through it.

Which is what makes this movie matter. What makes it a delight to watch is how Baker avoids the sad sack stereotypes that Hollywood projects lean on when depicting poor people, and finds a way to make your heart swell with joy for the resilience of the human spirit even as he’s breaking it into pieces.

As we approach the season where media outlets begin compiling “best of” lists, don’t be surprised if you see The Florida Project among the top films of 2017.

Christians: Don’t Spread Conspiracy Theories in the Wake of Tragedies