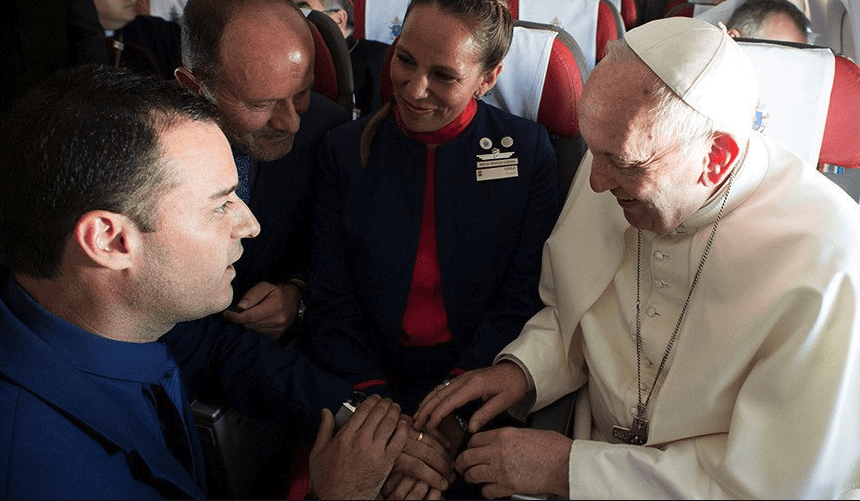 Your dream wedding is trash compared to this one. Thursday morning, Pope Francis held an impromptu wedding ceremony aboard the papal plane to marry two flight attendants.

Paula Podest Ruiz and Carlos Ciuffardi Ellorriaga began talking to the pontiff during a group photo shoot. The couple had planned to be married in 2010, but was interrupted by the great Chilean earthquake of that year. The church where Podest and Ciuffardi were set to hold their ceremony was destroyed.

The couple had a civil ceremony, but were never able to have a formal ceremony before a church official until Pope Francis offered to conduct the proceedings himself. Francis blessed their rings and had a cardinal aboard draft the wedding certificate by hand right there on the airplane. The couple signed the certificate along with Francis and a witness, the CEO of the airline.

#PopeFrancis just married during the flight to #Iquique this couple of flight attendants! They were talking with the Pope. They said they didn’t get married in the Church. The Pope asked if we wanted to get married immediately. They said YES! #modopapa pic.twitter.com/9V4Kt4giY8

As a gift, Pope Francis presented the bride with a white rosary and the groom with a black rosary.

Ciuffardi told reporters that the Pope told them, “This is the sacrament that is missing in the world, the sacrament of marriage. I hope this motivates couples around the world to marry.”

#PopeFrancis marries Paula and Carlos, an air steward and stewardess on board his plane. He performed ceremony after Church they wanted to be married in was destroyed in earthquake. Paperwork was done mid-air. (Pope’s signature bottom right) Photos: @antoniospadaro @inesanma pic.twitter.com/RkOmg3DLPA

Not A Joke: ‘Paddington 2’ Has the Best Rotten Tomatoes Score of All Time