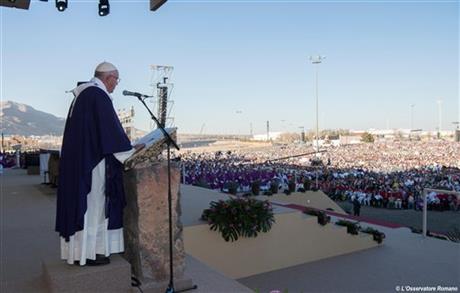 Just when you thought the national saga with real estate mogul and GOP presidential candidate Donald Trump couldn’t get any stranger, the Pontif himself publicly questioned Trump’s faith. Yes, that’s right. Speaking earlier today, Pope Francis said Trump is “not Christian” if he wants to build a wall along the U.S.-Mexican border—something the candidate has repeatedly said he wants to build. He said: “A person who thinks only about building walls, wherever they may be, and not building bridges, is not Christian. This is not in the Gospel.”

It didn’t take long for Trump—who claims to be a Presbyterian—to respond:

For a religious leader to question a person’s faith is disgraceful. I am proud to be a Christian and as President I will not allow Christianity to be consistently attacked and weakened, unlike what is happening now, with our current President. No leader, especially a religious leader, should have the right to question another man’s religion or faith.

EDM Is Getting Its First-Ever Awards Show