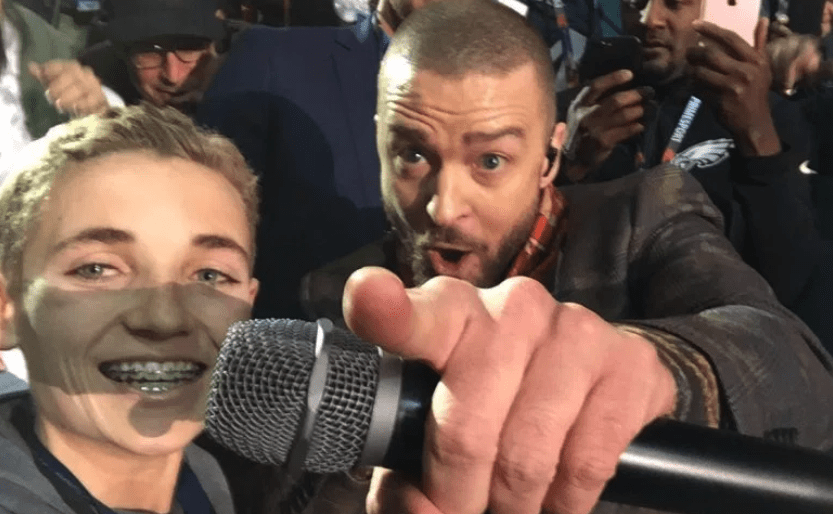 There he was, next to one of the biggest musicians in the world and on camera during the biggest American television event of the year, and he was looking at his phone. Ryan McKenna, a 13-year-old (Patriots fan?) from Massachusetts, became the biggest meme of the Super Bowl.

During his halftime performance, Justin Timberlake climbed up into the stands and ended up next to McKenna, who was quickly singled out to take a picture with the superstar. During “Can’t Stop the Feeling,” while most people around were dancing and clapping, McKenna seemed to clam up and divert to his phone, and speculation over what he could have possibly be doing in the middle of the most visible moment of his life has sparked tons of hilarious tweets. Check it out:

To be fair, the selfie McKenna ended up scoring with Timberlake was pretty awesome. He told the Twin Cities Pioneer Press: “It’s been so crazy. I don’t even know what to think. All my friends have been texting me and stuff. It’s insane.”

McKenna says he was recording video of the performance and was trying to switch to open the camera app. We’ll let it slide this time, but maybe next time, Ryan, just relax and enjoy the show?

Our @GMA team at #SuperBowl52 has obtained the selfie from the selfie kid #PepsiHalftime pic.twitter.com/xuY5PAHuO4

The Best Way to Share Your Faith Is to Show, Not Tell