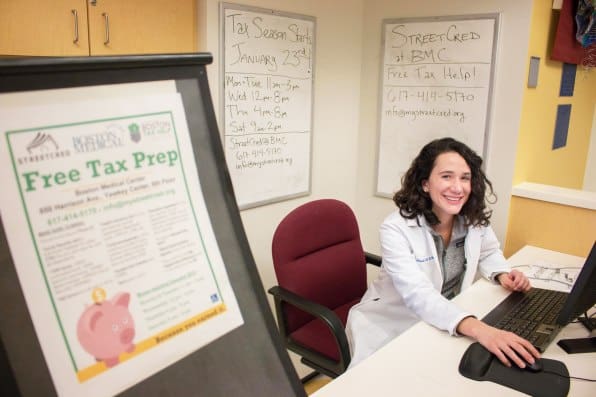 The Earned Income Tax Credit is available to low-income families or children from underprivileged backgrounds. It’s estimated that the EITC, paired with the Child Tax Credit, lifted 5 million children out of poverty in 2013 and can give families as much as $3,400 for child healthcare (that number can be more for families with more kids). Of families who qualify for the benefit, 25 percent don’t collect it.

Lucy Marcil wants to correct that. A pediatrics resident at Boston Children’s Hospital, she partnered with fellow resident Michael Hole to create StreetCred in 2015. StreetCred partners local volunteers with tax experts to train them in filing the EITC and CTC. Then, the volunteers are stationed in pediatric waiting rooms to help eligible families file and receive benefits. It’s a simple idea but an effective one.

Marcil was awarded a 2018 TED Fellowship for her work with StreetCred. “The thing about this model is it’s very scalable,” she told Fast Company. The program has expanded to four health centers in the Boston area, and will expand soon to five more states. It helped 450 children during the 2016 tax season.