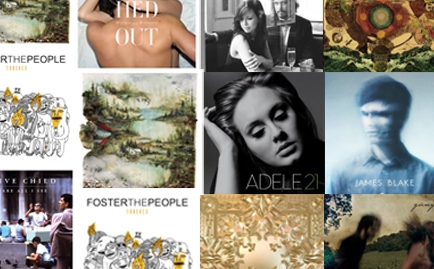 2011 was a strange year for music. You had highs (Arcade Fire winning a Grammy for Best Album!) and lows (Rebecca Black). There were weird spats (sampling icons The Avalanches and Bon Iver got into a Twitter fight) and even stranger collaborations (the abysmal Lou Reed and Metallica team-up). But through it all, some great music was released. It was the year a twentysomething torch singer from the U.K. ruled the world, when ‘90s R&B continued its steady ascent back up the charts and a year when the little guys made it. Here’s a look back at the musical world that was.

In a year dominated (again) by AutoTune and prefab pop stars (remember how Katy Perry tied Michael Jackson for most number-one singles from one album?), it seems surprising that the album that sold almost 5 million copies was known for its lack of pretense and sheer vocal skill. Adele’s 21 sold more copies than Lady Gaga’s and Lil’ Wayne’s new albums combined and brought back artistry to the pop charts. Singles like “Rolling in the Deep” and “Rumor Has It” were rare songs that allowed hipsters and soccer moms to have a mutual object of admiration. There’s a reason the most talked about moment at this year’s usually shock-filled MTV VMAs was Adele’s heartbreaking performance of “Someone Like You”—it reminded all of us what it looks like when someone sings with their heart fully exposed.

9. Active Child, You Are All I See

If you were to try to describe the music of Patrick Grossi’s project Active Child, you might start by mentioning the otherworldly falsetto Grossi uses. Or the classical instrumentation and harp. Or the thudding R&B beats. Or the massive amount of reverb. Or you could just be honest and say you haven’t really heard anything like Active Child. From the surprisingly sensual (and AutoTuned) “Playing House” to the ‘80s New Wave homage of “Shield & Sword” to the epic “Johnny Belinda,” You Are All I See is at the most bombastic album of 2011.

If you listened to the radio at all this year, you heard Foster the People. From the ubiquitous “Pumped Up Kicks” (seriously, though, can they put a moratorium on playing this song for at least a year?) to “Helena Beat,” every song on Torches seemed like (and probably will be) a radio single. But if it was hard to avoid the band on the radio, it was equally impossible to not appreciate how catchy, fun and, well, good Torches is. Filled with huge hooks, synthesizer flourishes and downright danceable beats, the album reminded all of us that it’s OK for music to be poppy and toe-tapping.

Most of the conversation around the superstar team up on Watch the Throne had to do with—to use Kanye West’s terminology—the “luxury rap” contained on the album. And to be sure, Throne has plenty of that—West brags about the “Hermés of rap” and Jay-Z seemingly can’t even remember how many Mercedes he actually owns. But overlooked in all the furor was a surprising amount of depth scattered around the materialistic trappings (and casual profanity and sex talk). “Murder to Excellence” takes on black-on-black violence and “Welcome to the Jungle” finds Jay-Z copping to actual depression—not exactly the norm among rapper arrogance. Perhaps the most moving song is “New Day,” a song aimed at the possible sons of West and Jay-Z, filled with warnings about the trappings and general emptiness of fame.

6. Gungor, Ghosts Upon the Earth

Something must have happened between Gungor’s last album, Beautiful Things, and their 2011 effort, Ghosts Upon the Earth. Because where Beautiful Things went for epic in sheer size and glossy guitar solos, Ghosts goes for epic with quiet build-ups, surprising rhythms and bursts of string arpeggios. The most surprising thing? Ghosts actually hits epic way more than Beautiful Things did. There’s been plenty written about how Ghosts is a concept album that came about after frontman Michael Gungor spent a week in Assisi (stomping grounds of St. Francis), and those are important notes. But for a genre that sometimes has difficulty pairing its lofty words and ideals with music that is equally lofty and good, Ghosts Upon the Earth is one of the rare “worship albums” that hits that goal throughout its run time.

Next page: Number 5-1 and honorable mentions …

5. Washed Out, Within and Without

In 2009, “chillwave” was all the rage. Neon Indian, Memory Tapes, Toro Y Moi and Washed Out (among others) were making a new type of music that combined heartfelt singing, electronic backbeats and found sounds behind a towering wall of reverb. Fast-forward to 2011, and all of those bands have released sophomore releases. While most treaded water or changed styles, Washed Out—the brainchild of Ernest Greene—alone fulfilled the promise of his debut. Within and Without is an aural experience that sounds as good in the car as it does through headphones, hitting emotional (though, in spite of the semi-NSFW cover art, not sexual) highs and empathetic lows. There are highlights (like “Soft” and “Eyes Be Closed”), but the real triumph of the album is that it delivers 40 minutes of blissed-out pop without being boring for even a second.

With their self-titled 2009 debut, Fleet Foxes managed to combine ‘60s folk, rondo singalongs and impeccable tunesmanship into a package even your parents liked. So what did they do for a follow up? They went even deeper into music geek territory. At once more and less accessible than their first full-length, Helplessness Blues retains killer harmonies (though fewer of them) and folk flourishes, but adds some Simon and Garfunkel (“Battery Kinzie” and “Montezuma”), more featured singing from frontman Robin Pecknold (“Someone You’d Admire”) and shape-shifting song cycles (“The Shrine/An Argument”). Helplessness Blues is also concerned with very timely lyrical themes in traditional trappings—the opening salvo from Pecknold, So now I am older than my mother and father / When they had their daughter / Now what does that say about me?, sets the tone beautifully. Blues is a feat of classic rock homage, a quarter-life crisis and the best harmonies in music.

2011 will likely go down as the year that finally killed dubstep. Whereas only a few years ago the term was mostly known to aficionados of dark electronica who worshiped at the altar of Burial and his Hyperdub compadres, now “dubstep” is in commercials, at frat parties and at the Deadmau5 show that just sold out in your city. So it makes sense that James Blake (and his self-titled, full-length debut) is being heralded as “post-dubstep”—music that retains the chopped, woozy beats of dubstep but adds in plenty of its own sounds and deconstructions. What also sets Blake apart from other laptop acts is his ability as a traditional singer-songwriter—even apart from the gargling backbeat, his cover of Feist’s “Limit To Your Love” is nothing short of revelatory. “Wilhelm’s Scream” is perhaps the most representative of the “post-dubstep” style with its warped vocals, softly tinkling electronic noises and a background sheen of sound that threatens to fall apart at any moment.

There was perhaps no bigger success story in 2011 than that of The Civil Wars. The duo, made up of industry veterans Joy Williams and John Paul White, had built up a steady buzz of anticipation through some excellent EP releases, but surely no one saw their massive level success coming. Their debut full-length, Barton Hollow, reached number one on iTunes, number three on Billboard and shattered pretty much every expectation. But maybe we should have all seen it coming—after all, it’s not often a duo comes along that seems to musically complete one another like White and Williams. Whether they’re tackling country/folk tropes like God, love and death or they’re teasing the listener with their “are they or aren’t they” harmonies (for the record, they aren’t—they’re both married to other people), Barton Hollow finds two consummate musicians at the top of their games, driving the other to greater heights than seem possible.

The mythology of Bon Iver’s last album has been beaten to death. Yes, frontman Justin Vernon wrote the album in a cabin after a bad breakup. But people sometimes forgot the album was also an incredible piece of music. And after a long stretch of time—one where Vernon appeared on a Kanye West album, made amazing (and totally sincere) neo-yacht rock with Gayngs—Bon Iver is back with a self-titled second album that takes the best parts of For Emma, Forever Ago and multiplies them. Every song on Bon Iver is layered to extremes. There are so many sounds on one track, it’s hard to pick out why the music is so moving. There are trumpets flitting around the beat (“Perth”), a barely-there saxophone (“Michicant”) and warbly synths (“Calgary”), but just when you think you’ve got a bead on what’s happening, something comes out of nowhere. The lyrics are nearly inscrutable, but somehow become clear just in time to leave a gut-busting blow—just try to listen to “Holocene”’s, And at once I knew / I was not magnificent without shaking your head in (self) recognition. Perhaps the best thing about it is Vernon’s full commitment to thoughts, feelings or musical styles that have been nearly destroyed by irony. If anyone can make the Bruce Hornsby AutoTune of “Beth/Rest” sound completely and utterly sincere, it’s Justin Vernon on this masterwork of an album.

Caring for God’s Creatures—Great and Small