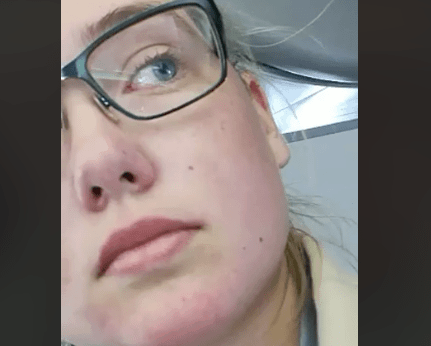 At only 21 years old, a Swedish student temporarily prevented the deportation of an Afghan man by refusing to sit down on the plane until he was removed from the flight. She streamed the entire protest on Facebook Live.

Elin Ersson, a social work student at Gothenburg University, streamed the 13-minute video on Monday. By Wednesday, it had received over 2.5 million views.

The plane was leaving from Gothenburg, Sweden, and was headed to Istanbul.

Though passengers were yelling at her to sit down, Ersson stood her ground. When someone in the background told her to sit down and turn off her phone, you can hear her saying, “I don’t want a man’s life to be taken away just because you don’t want to miss your flight.”

Ersson refused to sit down until the pilot removed the Afghan man from the plane. Halfway through the video, she got emotional, realizing that passengers on the flight were now standing with her.

The video ended with Ersson exiting the plane and being told that the Afghan man was being taken off as well. The man’s bags were removed from the flight and the plane broke out in applause.

The flight was delayed by two hours.

Ersson told the Guardian she had been volunteering with refugee groups for about a year.

“I hope that people start questioning how their country treats refugees,” she said. “We need to start seeing the people whose lives our immigration [policies] are destroying.”

Her protest took flight overnight, rapidly spreading across the internet and shining a spotlight on domestic opposition to Sweden’s tough immigration regime.

Unfortunately, Ersson said she believed the young man she protested for was taken to Stockholm and already put on a flight to be deported.

“This is how deportations in Sweden work,” she said. “The people involved know nothing and they are not allowed to reach out to their lawyers or family. My ultimate goal is to end deportations to Afghanistan.”

Hear Me Out: Philip Seymour Hoffman Was an All-Time Villain in ‘Mission: Impossible III’

What You Need to Know About Overcoming Social Anxiety