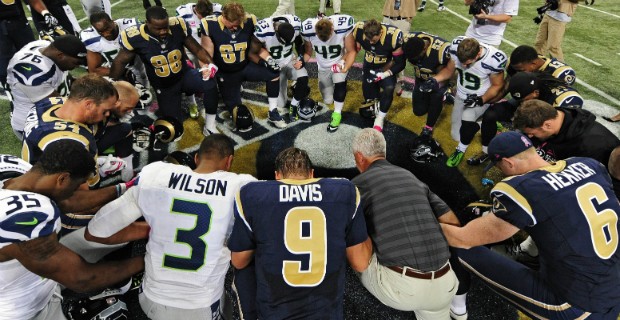 If you’re not a football person, you might not know, but we’re approaching the culmination of the NFL season: There are now only four teams left in the league’s playoffs, and this weekend’s conference championship games will determine who will meet in the Super Bowl on February 5.

Sports Illustrated gathered a few sports journalists and NFL columnists for a “roundtable” discussion about the 2016-17 season trends, off-the-field issues and stories they think get overlooked. That last part is where things get interesting. When asked about stories in the NFL that don’t get enough attention from sports media, Armando Salguero, an NFL columnist for the Miami Herald, brought up the place of faith within the NFL.

“The biggest under-covered story in the NFL every year is how huge a factor faith in God and Jesus Christ is in the playing and coaching of the sport,” he says. “Every day, in season and out of season, coaches and players (and women on staff) pray before they begin their duties and often ask God through Jesus Christ for guidance and health in the carrying out of their functions. Yes, they get paid and rewarded, but for many, everything they do is unto God. It is their motivator and at the center of who they are.”

In times of adversity, which come often in the NFL, they turn to their faith for answers, strength and encouragement. That touchdown celebration you see every weekend, where guys point to the sky? That’s not the first or only time these men address God, Christ, and heaven, but rather that is the public view of a deep and daily walk and relationship these people have with their Lord. Many of these people see themselves as Christians first and employees of the NFL later. And yet, their stories—their testimonies—go unreported because the media is largely secular and the NFL wants to keep the game largely secular despite the fact a large percentage of its employees are believers.

Salguero suggests that faith is under-covered because the topic makes people in sports media uncomfortable. Apparently anticipating pushback, Salguero points out how frequently football players will cite God, Jesus or their faith in sideline interviews, but almost never get asked to elaborate on or even defend their statements. He says:

When sideline reporters ask a question after the game and the player says, “First I want to thank my Lord Jesus Christ,” the follow up is never, “For what? What did He do for you?” The follow is more likely about a touchdown run or turnover. Disagree? Here’s a test: Did you cringe or roll your eyes when you read the first sentence of this answer? Yeah, faith in God and Jesus Christ among NFL people makes the media uncomfortable and reporters and news organizations run away from the topic.

Who knows if Salguero’s analysis will bring any change in how sports journalists approach faith in football, but at the very least he’s put the topic on a very big, nationally read table.

You can read the whole SI roundtable—which goes on to talk about other social and ethical issues surrounding the sport like concussions and continued instances of domestic violence among players—here.

These IG Accounts Will Make You Appreciate Creation