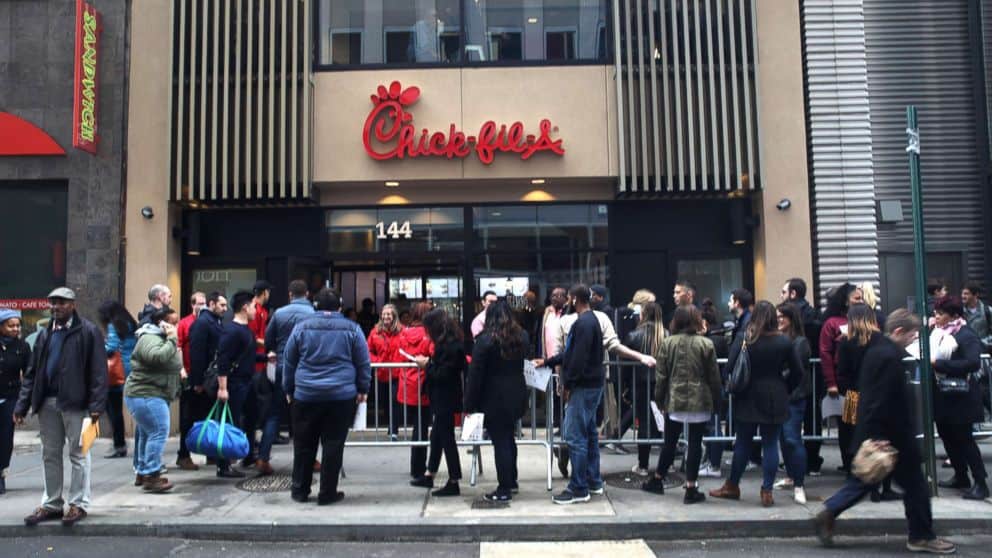 Climbing the charts to soon become the third-largest fast-food chain in the nation, Chick-fil-A is taking the world by storm. Just last month, the cow-loving chicken chain opened the doors to its fourth restaurant in Manhattan. The new Chick-fil-A on Fulton Street currently holds the record for the largest in the world: It’s five stories tall and over 12,000 square feet. Customers can spend the warm-weather months enjoying their meal with a view on the rooftop terrace, where they will experience unimpeded views of the World Trade Center’s Freedom Tower. Most New Yorkers are happily joining in on the hype. The Fulton Street franchise has a consistent line stretching to nearly the end of the block.

But not everyone is enamored by the chain’s newest installation. In his instantly infamous piece published by the New Yorker, writer Dan Piepenbring calls the brand’s presence in the Big Apple an “infiltration, in no small part because of its pervasive Christian traditionalism.” He pivots to discuss the company’s stance on same-sex marriage, quoting their promise to treat each customer with honor and respect, but says that they have, “quietly continued to donate to anti-LGBT groups.”

In the piece, he also alleges that Chick-fil-A operates with an ulterior motive, and cites their mission statement which says they exist “to glorify God.”

He goes on in the piece to discuss the role of Chick-fil-A’s number one advertising tactic: the beloved cows. Since their introduction in the nineties, Chick-fil-A cows have continued to be one of the most popular campaigns in fast-food history and are crucial to the chain’s publicity. It’s no secret that Chick-fil-A loves their cows: they have their own calendar, employees dance in cow suits at special events, and the franchise even holds an annual “Cow Appreciation Day,” offering free meals to anyone who braves the restaurant dressed as a cow.

Most people don’t find an issue with this, but Piepenbring wonders if we should ask why Americans fell so hard for an advertisement where one farm animal begs us to kill another in its place. He goes so far to compare the cows to evangelists by saying, “If the restaurant is a megachurch, the Cows are its ultimate evangelists.”

Piepenbring ends the article by remarking that “there’s something particularly distasteful about Chick-fil-A,” saying that it is “infected with suburban piety” and then encourages New Yorkers to tell the restaurant “NO MOR.”

Once this piece took to the throngs of Twitter, Chick-fil-A lovers were quick to jump to the company’s defense and completely roast this guy. Albert Mohler, Southern Baptist Theological Seminary President, called the article an example of “the condescending elitist secular journalistic left gets the reputation of being openly hostile to Christianity,” and refers to the article as “rancid.”

If you ever wonder how the condescending elitist secular journalistic left gets the reputation of being openly hostile to Christianity, see attached tweet pic, and rancid article. https://t.co/o7LVCR5ty8 pic.twitter.com/Dh91Hvff9O

Other users were also quick on the defense, wondering if the New Yorker would print the same kind of piece regarding a Muslim-owned restaurant.

Piepenbring was clearly prepared for this backlash. He retweeted a few funny responses to his piece before tweeting, “Welp time to sit down with a Wendy’s spicy chicken sandwich and a cold one and read my mentions.” Another user quickly responded with a photo of a Wendy’s restaurant marquee, which read: “We stand with Chick-fil-A.” Well played.