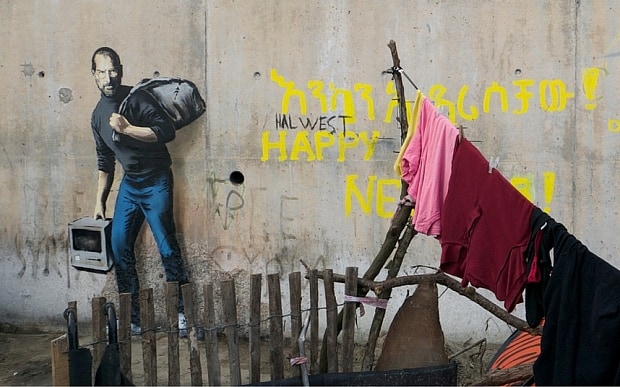 In the port city of Calais, France, famed street artist Banksy has installed a new art piece featuring Steve Jobs. Calais is known for its makeshift camp site—originally a Banksy installation called Dismaland—where thousands of refugees and migrants have been waiting for months under less than ideal conditions in hopes of making their way to the U.K. This campground has become somewhat of a symbol of Europe’s failure to process the refugees seeking new opportunity in the U.K. and France. Banksy’s mural of Steve Jobs shows him in his iconic black turtleneck holding an early Apple computer and a bulging bag. For many, this may seem random, but Jobs was the son of the Syrian refugee Abdul Fattah Jandali who resettled in the U.S. after fleeing persecution in the city of Homs. Banksy released a statement explaining the artwork, according to The Independent:

“We’re often led to believe migration is a drain on the country’s resources, but Steve Jobs was the son of a Syrian migrant,” read the statement. “Apple is the world’s most profitable company, it pays over $7 billion a year in taxes – and it only exists because they allowed in a young man from Homs.”

Americans Are Losing Their Faith in God