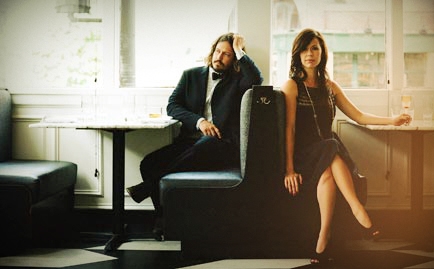 Yesterday, the Civil Wars released their debut full-length album, Barton Hollow, and it immediately hit number-one on iTunes. We spoke recently with the duo about how they formed, why they work so well together and what it’s like to hear their songs on TV.

You two met at a songwriting camp in Nashville. What was it that drew you to working together?

John Paul White: Joy and I have definitely talked about the moment a million times between us. The first time our voices sounded out together in the room, it was a weird pinch-me kind of moment. I’d never had that kind of marriage between two voices before in my days. We both [had] never felt that before. The origins were out there in that “first sight” kind of thing.

Joy Williams: I think it took several months before we actively thought there was a way to maybe build on that or to continue to pursue the idea of blending of the voices together. For me I remember particularly after the songwriting camp us getting back together four or five months after that and writing another song together and the blend continued to stay. It wasn’t a blue moon type of experience.

JPW: We always talk about the blending of the voices and that’s a huge part of it, but on top of that [there was] the melding of ideas. We have different viewpoints on things being from totally different backgrounds and geographical areas, but there’s a common thread to all of it too. The type of music that was coming out of us was kind of hard to explain being from our different backgrounds; so we just felt like we were kind of obliged to keep going with it. There was no way to stop doing it and see where it led to; here we are.

You both had pretty lengthy solo careers, and Joy, you were well-known in the Christian music industry. Has the transition to this new venture been difficult?

JW: Yeah, ’cause John Paul is just such a diva, it makes it really difficult to get things done.

JPW: I shine so much onstage it’s really hard for her to even show up. People don’t even realize she’s there. I wear black so it dulls it down.

JW: Yet another odd thing about it, and by odd I mean sort of fortuitous, is the fact that the joining of the two musically just makes sense. It feels more fluid than most things I’ve ever done musically. That part’s actually really fun.

JPW: The live aspect for me is with Joy. … As a solo artist, it’s you. Everything is on you; the spotlight is on you, you carry all the banter, you lead the parade. But with this, there is a give-and-take that I never would have expected to be able to have with somebody on stage. I’ve been in bands a lot during my youth, but it was always five different perspectives, five different horses never pulling in the same way; this feels like we’re 200 percent what we could be as a solo artist.

JW: I don’t think I actively think about the musical chapter I feel like I’m in. I enjoyed what I learned in the process of being in CCM for about six or seven years, but I think, too, on top of that, I started feeling a little bit boxed in. I think within that genre of music, it’s very important to overtly express the worldview that you have versus what you see actually through that worldview. So I’ve been really enjoying the freedom of being able to write what I see through my worldview. And I think writing about truth and beauty in a way that plays with dark and light is really fascinating to me and something that I really enjoy.

Beauty can be bittersweet and truth can be hard to swallow, and I think we inadvertently write within that tension with what we do—though it’s never actually discussed. It is different, but it seems like such a good space to be in, and I’m really thankful to be linking arms with John Paul because I think [the] sum of the parts is different than any other music we could make or have made up to this point as solo artists.

What has the reception been like at your live performances?

JPW: The way it feels onstage is unlike most anything I’ve ever done. Joy and I have both played wide and varied locations and thousands of crowds, good, bad and ugly, but I feel a connection that I’ve never truly felt before. I don’t mind sticking my neck out there and saying that it’s been really good, because I hope they’re enjoying it as much as I’m enjoying it. I feel like that’s the way things have been and the crowds just keep getting bigger, so that can’t be a bad thing.

JW: We’re thankful again to know the music is not only connecting with people that show up to the shows, but also people within an industry format. That’s lifeblood for independent musicians, which is what we are. So not only is it a life-giving mechanism for us to continue to be able to make the music we love, but it also continues to be a great way to market ourselves in a way that we would never be able to do otherwise.

How does it feel to be getting a lot of airplay on television shows now? Was that something you anticipated?

JPW: Having it on a show is a great thing in itself, but that people did latch on to it and seek us out, that’s just crazy.

What inspires and influences your music together?

JPW: Just about everything we’ve ever seen, heard, felt, every fight we’ve had with anyone in our lives—there are no holds barred with subject matter for us. We pull from anything that kind of floats into the air or what the news brings us that day. … Joy has got a lot more of a pop background than I do, and I’ve got a lot more of a country background. But we’re both huge rock fans, and most of my solo stuff has been rock stuff. We’re fans of everything from gospel, to bluegrass, to more middle-of-the-road jazz kind of stuff. We’re all over the place, from Billie Holiday to rap. We try to pull from every bit of it.