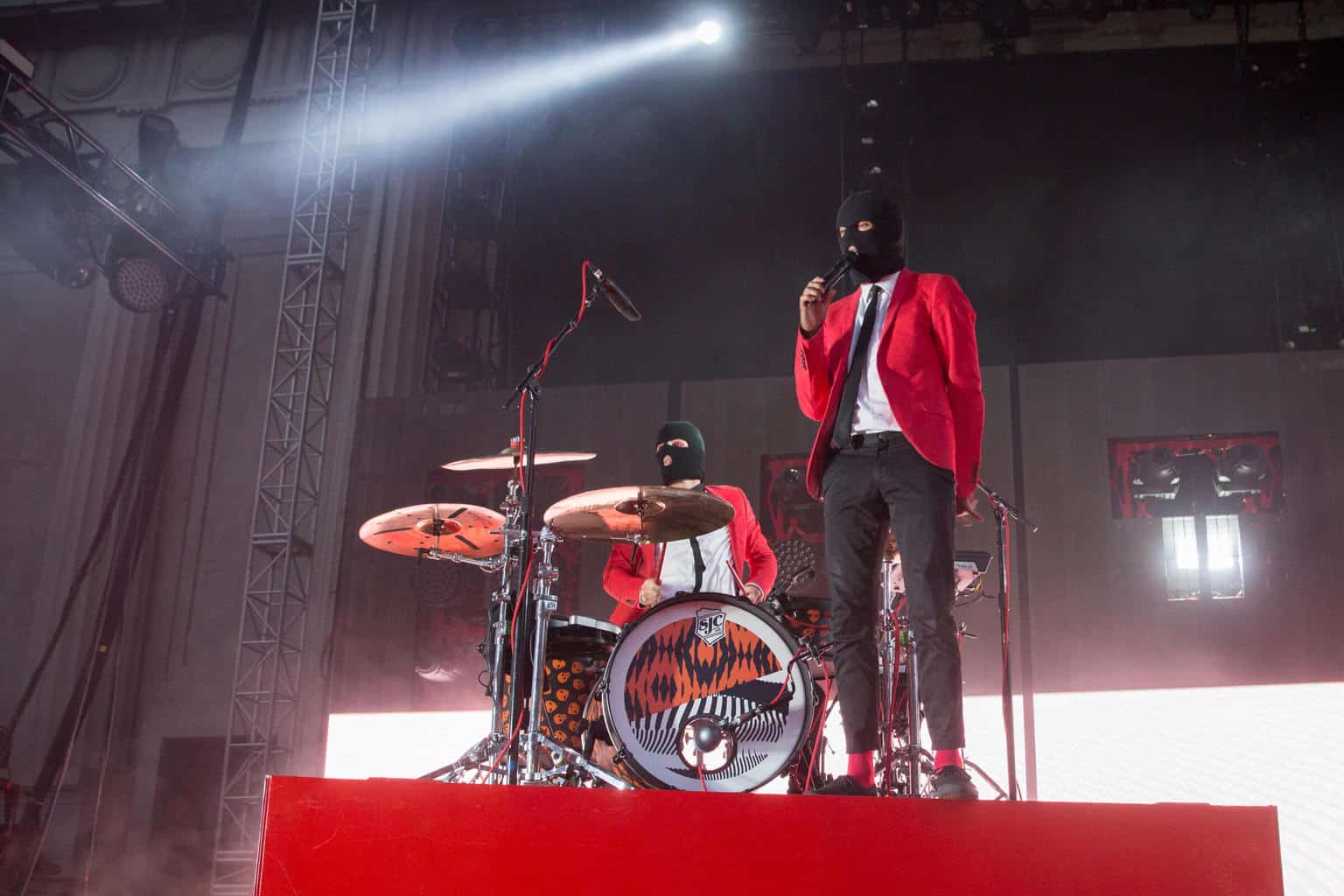 On Trench, the new concept album from Twenty One Pilots, I found everything I was expecting from the musical duo—reggae beats, powerful lyrics, fast raps and infectious melodies—everything except God.

Let’s catch you up on what has changed since the band’s 2015 album, Blurryface. On that album, the Blurryface character represents the insecurities of lead singer Tyler Joseph. On Trench, Blurryface goes by a new name. Both on the album and in the accompanying music videos, Blurryface manifests as Nico, a mysterious bishop who wears red robes and contains people’s spirits within the city of Dema, a geographical manifestation of doubt, darkness and depression.

In the music videos for Trench‘s lead singles “Jumpsuit,” “Nico and the Niners” and “Levitate,” we see Joseph try to escape his insecurities only to be captured, try another escape, then be captured again. The story is reminiscent of past albums Blurryface and Vessel (2013) in which Joseph recounts similar cyclical struggles with doubt, fear and depression.

When unpacking Trench on my YouTube channel, I joked its world was like “the Narnia of depression,” pointing to the somber lyrics and allegorical implications for the real world. However, as I continued exploring the album, I realized if Trench is Narnia, it’s missing a character: Aslan.

God has heavily featured on previous Twenty One Pilots albums. Joseph calls out to Him on Vessel tracks “Holding on to You” and “Trees,” and on Blurryface, he begs to be saved in “The Judge” and “Goner.” But on Trench, the cycle of escape and capture continues with only three characters: Nico the bishop, the resistant banditos (representing Joseph’s fans, friends, and family) and Joseph himself.

Trench lacks a Christ figure. In general storytelling, a Christ figure guides, saves and supports other characters. Sometimes the allusions to Jesus are explicit; other times not. Think Gandalf in The Lord of the Rings, Obi Wan Kenobi in A New Hope, and, of course, Aslan in The Chronicles of Narnia. While Christ figures have been present elsewhere in the Twenty One Pilots catalogue, there isn’t one to be found on Trench. No one redeems Joseph, no one sacrifices themselves for him and no guides him toward a hopeful ending.

Instead, the album’s music videos seem to communicate that no matter how many times Joseph escapes his doubt or insecurities, those feelings and fears will always recapture him.

The songs, likewise, depict a continuous, perhaps eternal struggle, particularly “Leave the City,” a somber, slow track at the end of the album. In an interview with Alternative Press, Joseph explained, “Once I started creating [“Leave the City”], I knew that I [wasn’t] going to name the place I’m going . . . I’m talking about the world I’m traveling through, but I never really reach the place I’m trying to get to. It’s not because I’m holding on to some secret: You’re looking at someone who is still trying to figure out where that place is.”

On “Leave the City,” Joseph says “I’m tired of tending to this fire,” “They know that it’s almost over,” and “It’s only time before they show me / Why no one ever comes back / With details from beyond.” The song describes a very real and serious struggle with faith, maybe one that many Christians have experienced themselves during times of spiritual maturation.

Later in the interview, Joseph explained “the process I’ve been on [for] this record is the closest I’ve been to entertaining a world where there isn’t a God.” He clarifies, “I still believe in God. I still want to call myself a Christian—because I am a Christian.”

This confession from Joseph prompts me to consider Trench as a way for Joseph to experiment with a projection of his life without the presence of a Christ figure, an exploration of the question: “If God didn’t exist, where would I be?” The melancholy of “Leave the City” and the ambiguity of Trench‘s music videos suggest Joseph is struggling with the idea of a godless fate. He hopes it’s not the case, but sometimes, he’s resigned to the feeling.

Overall, in Trench, Tyler Joseph describes what it means to live as a human (or Christian) in the face of brutal doubts, fear and insecurity. It can be terrifying for Christians to admit they do not fully know where they are going. We often worry doubt itself might be a sin. We want to appear in full control of our faith.

As a child, I perceived Christianity as black and white. I was a Christian or I was not. Anytime I doubted, I buried it deep, not wanting to “go out of bounds” of Christianity for the moments I entertained my questions.

So for me, Trench is a reminder deal with doubt head-on, to think about it and talk to others about it. I can’t flex a “make doubt go away” muscle and feel it disappear. On Trench, Joseph shines a spotlight on his doubt instead of seeking a simple solution. He thinks about doubt deeply. He writes songs about it. And, perhaps most frightening to believers, he admits his doubt to the world—Christians and non-Christians alike.

This can make Trench uncomfortable to listen to, but I think that’s a sign Christians need to be more willing to accept the doubt in others. In a world that promotes skepticism, and in a Church that sometimes isolates those who ask questions, vulnerability and honesty on all sides may be the only thing that can bring us together through a sincere and real understanding of our faith.

Clifford Stumme explains modern song lyrics and teaches songwriting on his YouTube channel, Pop Song Professor. He engages audiences with new perspectives and helps them understand and express themselves.