If you were a Christian teen in or around the year in 2000 — Sharpied Chuck Taylors, asymmetrical haircut, an unreasonable number of bracelets, thrift store t-shirt — then you probably need no introduction to bands like Underøath, Anberlin, Mae, Further Seems Forever, mewithoutYou and so on. You probably wore your first generation iPod’s battery down to the dregs playing They’re Only Chasing Safety on repeat while reading Rob Bell, testing out the occasional cuss word in conversation with friends and maybe — maybe — smoking a clove.

Well, good news. A lot of your favorite acts from that era will be converging in Birmingham this September for Furnace Fest. This is, of course, pending some fairly significant gains on the COVID-19 pandemic, but that all seems at least somewhat possible and assuming it does happen we’ll all be off to learn how to start a fire all over again.

Underøath, Anberlin, Mae, Further Seems Forever, mewithoutYou, Stavesacre, Showbread and Living Sacrifice are just a few of the bands you might recognize from your giant vinyl case of late-90s/early-00s CDs who will be making appearance. These were the bands who may or may not have been necessarily Christian but weren’t definitively not Christian so they earned a spot on a lot of scenester youth group kids’ mixtapes, providing a semi-sanctified alternative to the Freaks and Geeks soundtrack. In addition to these Christian adjacent acts you’ve got plenty of bands like Taking Back Sunday, Juliana Theory, the Get Up Kids, Beloved, the Appleseed Cast, Everytime I Die, Emery, August Burns Red and Thursday who you’re probably familiar with as well. Just look at this beauty. 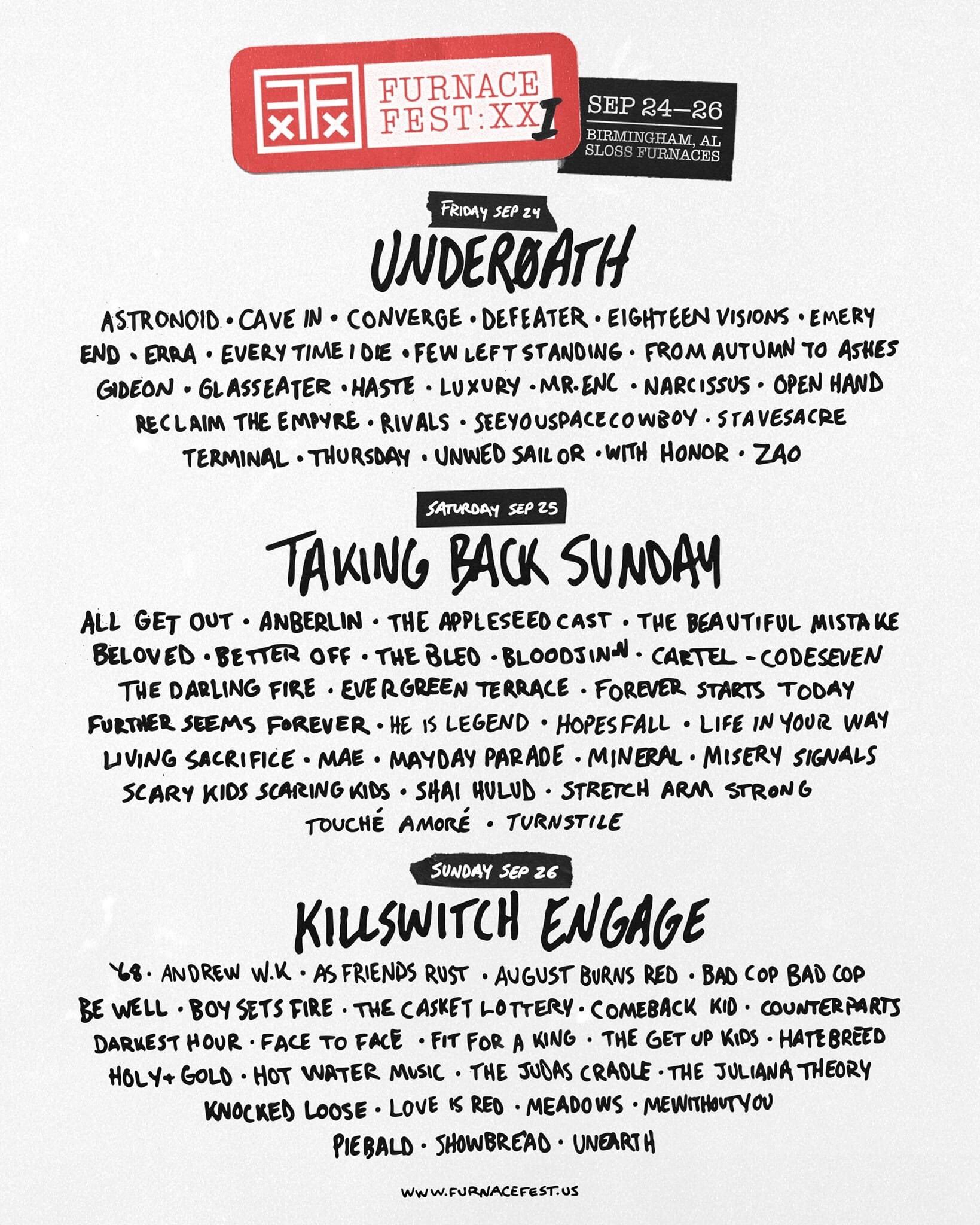 Furnace Fest was a staple of the early ’00s hardcore, punk, metal et al festival scene that tended to highlight Christian groups but wasn’t exclusive about it, which was pretty refreshing. Furnace re-emerged last year after a 17-year shutdown with this lineup and then had to punt the whole thing to this year for obvious reasons. Now it’s not clear that this will actually happen, of course, but festival organizers are moving ahead as if it were and promise to “observe all local and national large gathering guidelines for both the audience and the artists.” Sounds like a great time, assuming it actually happens, which it might, we’ll see!

Find all the details here. Take it away, fellas.