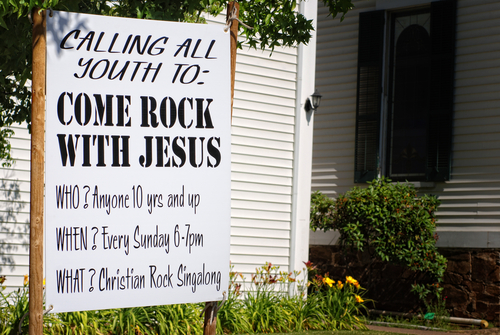 A few weeks ago, we got word that a Contemporary Christian Music supergroup was forming, with members of dcTalk, Jars of Clay, Petra and Whiteheart joining forces to create the CCM All-Star Review.

A dizzying swell of potential in the lineup, no doubt, but why stop there? The ’90s/’00s CCM scene is jam-packed with musicians who are probably itching for some sort of return to the stage. Why not make it as part of other CCM supergroups? Let’s build our own. But note: since dcTalk, Jars, Petra and Whiteheart were already claimed, we’ll have to explore some other options:

Real Newboys fans know why we have to double up on the drums for this CCM all-star act. An early staple of the Newboys’ live show featured lead singer Pete Furler and full-time drummer Duncan Phillips teaming up on a rotating drum kit that blew the collective mind of ’90s youth group kids.

Delirious? was an interesting act that went from a straight forward worship outfit to a more mainstream pop band and back without ever really changing what they did. The lineup went through a few variations but Tim Jupp was there virtually from the beginning, both as a keyboard player and sound engineer.

Herrera could add a much-needed dash of energy to the group, bringing his frenetic style to the scene in the same way his band acted as a wakeup call to the CCM scene in the ’90s when MxPx exploded. Plus, the guy can do double duty as a vocalist.

Skillet’s been around for a long time (and in fact, they’re still around; they’re 10th albumVictorious will release this August) and Corey Kooper’s been there virtually since the beginning, managing a variety of band duties from keyboards to drums to lead guitar. But she’s returned to rhythm guitar time and again, and watching Skillet play, it’s easy to see why. (Oh, and if the Newsboys aren’t interested in playing the drums, Jen Ledger proves herself more than capable of handling the spinning drumkit trick in the video below).

Why? You wanna know why Michael Sweet is playing the lead guitar for our CCM supergroup? If you have to ask why maybe you’re on the wrong website here.

To round everything out, one of the most gripping voices in the CCM scene, iconic to a generation for “Kiss Me” but well worth digging through the deeper cuts to appreciate the full range of her vocal talents.