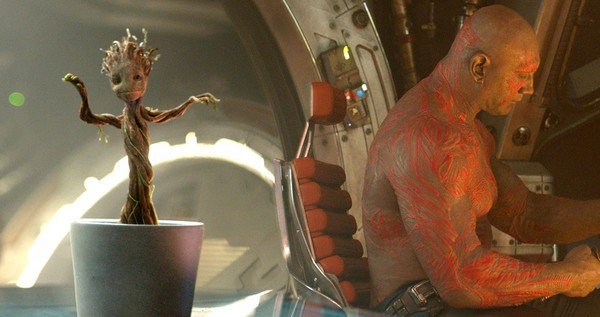 According to director James Gunn, the most frequent pushback he got from the Marvel offices while putting Guardians of the Galaxy together was about the music. “Nobody is going to want to hear this music,” he recalls them saying. But he stuck to his gun(n)s, filling the soundtrack with gooey pop gems from the Walkman era. It was a gamble that paid off, and the Guardians of the Galaxy mixtape went platinum.

So expect more goofy pop obscurities when the mixtape for Guardians of the Galaxy, Vol. 2 drops this Friday. It’s called The Awesome Mixtape, Vol. 2 and we finally know what’s going to be on it, thanks to an in-depth interview with Gunn over at Rolling Stone.

If you’ve seen the trailer, you know Sweet’s “Fox on the Run” and Fleetwood Mac’s “The Chain” will make appearances (apparently, Fleetwood Mac got to sign off on the scene their song appears on). Electric Light Orchestra’s “Mr. Blue Sky” and George Harrison’s “My Sweet Lord” are also there (“If the Guardians had a house band, it would be ELO,” says Gunn). Sam Cooke’s lovely “Bring It On Home” and Looking Glass’ goofy hit “Brandy (You’re a Fine Girl)” make appearances too, along with music from Cat Stevens, Glen Campbell, Cheap Trick and Parliament. There are also more obscure cuts from bands like Jay and the Americans. Check it out for yourself.

9. “Come a Little Bit Closer,” Jay and the Americans

You can check out Gunn’s thoughts on each of the tracks here, and the album will be available on April 21, for the curious. Or you can just wait and be surprised on May 5, when Guardians lands in theaters.

Your Job Doesn’t Define You