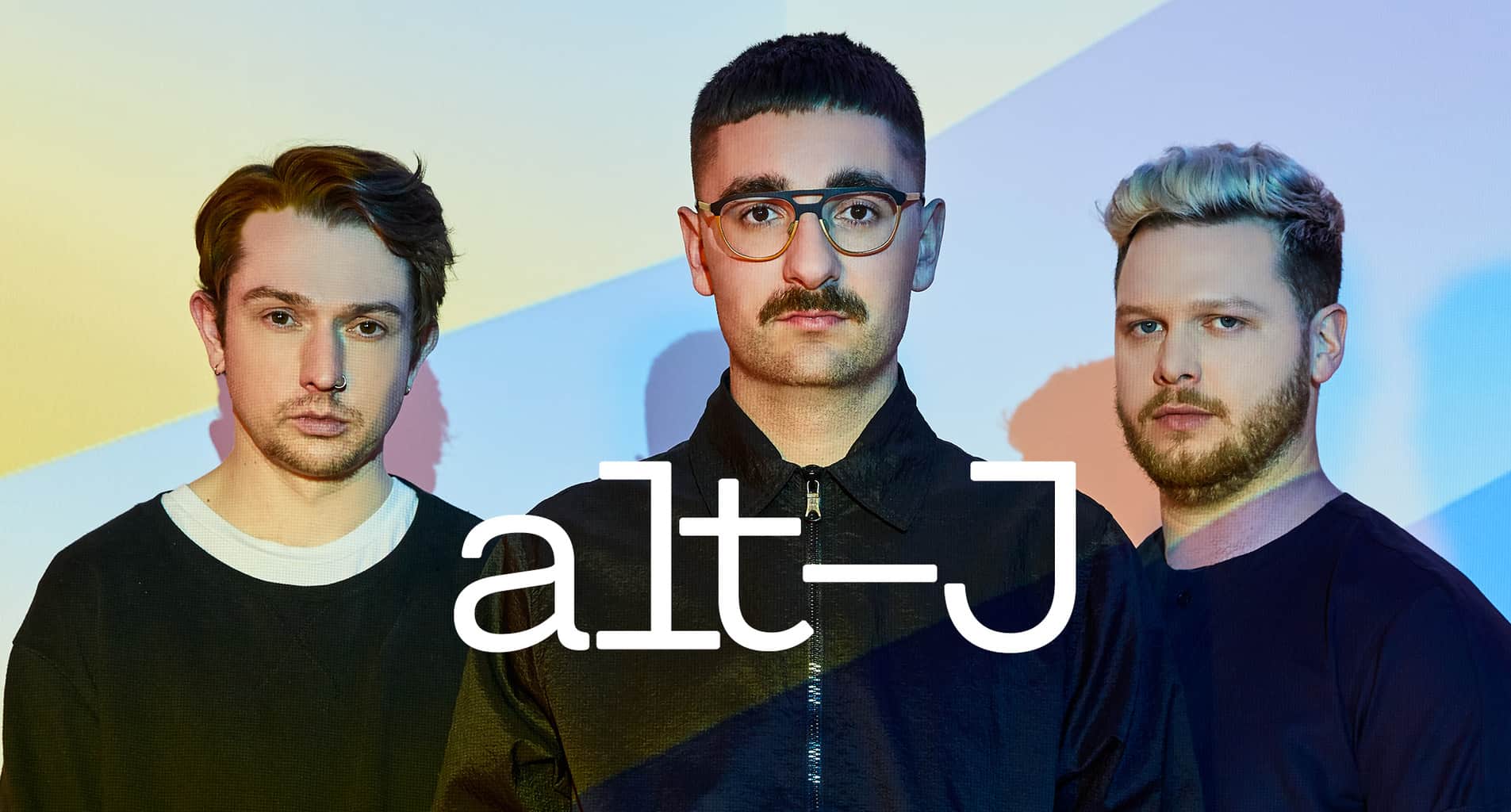 Eschewing any verse-chorus-bridge-chorus structure, “3WW” enters as some pleasant bass-heavy Bedouin instrumental and exits just the same, all the while interweaving guitar distortion, layered acoustics, strings from the London Symphony and additional vocals from Wolf Alice’s Ellie Rowsell.

It darkly yearns and pulses, lingers and passes as vocalist Joe Newman sings, “I just want to love you in my own language.”

If that seems an odd place to start, both with an album and an interview, it is, except to say that alt-J has always allowed their music to do the work. Forced into some vague categorization, the London-based trio could be considered a globally renowned rock band. Beyond that, however, they’re nearly impossible to describe, and they never play a part.

“That was always our foreign policy, really, to let the music do the talking,” explains Gus Unger-Hamilton, vocalist and keyboardist for the trio. “I think we’ve always put our best into a song, so to explain it any further is not a very useful exercise. Of course, you can’t really do that in this job, so we’ve gotten used to talking and letting our personalities be a bit more exposed to the media and the public. However, we still feel that we express ourselves best through the music. A little bit of mystery goes a long way.”

alt-J is on the verge of launching a large-scale North American tour, with dates coast to coast already sold out. Yet its members—Unger-Hamilton, Newman and drummer Thom Green—could walk down virtually any street in their own hometown without being recognized. Success without fame—a very rare achievement today that speaks to alt-J’s creativity.

Unger-Hamilton appreciates their unique path at this point, even if he’s not quite sure how to explain it. alt-J’s origins as a four-piece at University of Leeds, including then-guitarist Gwil Sainsbury, were like that of most young bands, a distraction from schoolwork or what Unger-Hamilton calls a “musical hobby.” After school, the band—then called Films—decided to properly record a four-song demo and reached a deal with Infectious Records.

From there, the music did the rest. Hypnotic singles like “Breezeblocks,” “Matilda” and “Tessellate” formed the foundation for their debut, acclaimed album, An Awesome Wave, which won the coveted Mercury Prize and three Brit Awards. Global touring opportunities came calling as word of mouth kept spreading, all without the typical social engine or publicity machine.

“I think we were lucky enough that on our first album, things really took off for us,” Unger-Hamilton says. “At that point, we didn’t really appreciate how well things were going, how lucky we were and what a unique position we were in. I feel like it’s only really now, on our third album, that it’s starting to sink in a bit. … At the time we thought we were experiencing the path that every band was going to experience, but now we realize that’s not the case.”

Relaxer is the band’s new album, an eight-song suite that includes more classical leanings than before and features singles like the aforementioned “3WW” and “In Cold Blood.” Unger-Hamilton believes the band is able to get away with their musical experimentation because they’ve set the tone from the outset. After all, if your band is difficult to categorize then you can willingly defy categorization.

“We made a name for ourselves on our first album, which was to be eccentric, experimental or left-field or other words like that,” Unger-Hamilton says. “Because it was that kind of an album, we now feel that we have a license to be as unusual as we want and to try to do new things. We have a fan base that appreciates that, that actually seems to like that instead of being afraid of it or freaked out by it.”

He remembers a distinct point when the band realized their experimental style was spreading faster than expected. In the fall of 2011, a music magazine, Loud And Quiet, had partnered with alt-J to release a vinyl single of two songs that would become live favorites, “Bloodflood” and “Tessellate.”

“We had just done a little single deal with a music magazine called Loud And Quiet to release a limited-edition vinyl single of a couple of our songs,” he says. “We had a launch party for it in a pub in East London and the place was absolutely rammed. People couldn’t fit into the room. They were spilling out onto the street and standing out there watching through the doors. At that point, we were just like, ‘Hmm, this feels like it might be a little bit more than just our hobby while we were students.’”

Relaxer is a natural next step after 2014’s This Is All Yours, which hit No. 1 in the U.K. and landed in the top 10 in 12 different countries. The band’s experimental dub-folk sound is present, yet new flavors have been added—an already inventive band intent on pushing the boundaries even more. Green’s own solo work as an electronic artist has now entered the band’s catalog as well as other recent influences.

“I think Relaxer is influenced by a lot of what we’re listening to,” Unger-Hamilton says. “For example, Thom, our drummer, has been listening to a lot of electronic music. I think some of the production values that he’s added to this album have clearly been influenced by his own listening habits. Joe, between albums two and three, listened to a lot of contemporary classical music like Philip Glass, which you can hear on this album. Then again I think it’s also about our musical upbringing, which is a clash of classical and folk from my side, some Americana and singer-songwriter from Joe’s side, and then some drumming from Thom that makes up alt-J, really.”

Their confidence in the studio has also translated to the stage, where alt-J will be busiest in 2017. A summer European tour that includes a festival appearance at Glastonbury cascades into a North American tour with stops at Red Rocks and Lollapalooza before heading back to Europe and then back to the U.S. in the fall for Austin City Limits and a year-ending set in Mexico City. Unger-Hamilton says he’s ready for it, since, as usual, the music will do most of the speaking for them. He’s also much more self-assured as a performer than he was in those early days around London.

“We have room to improve on all fronts still, but we do finally feel now that if someone comes to a gig, we’re confident they will be impressed and not like, ‘Oh I hope they don’t judge us too harshly. I hope they buy the album and judge us on that,’” Unger-Hamilton says.

Despite the critical acclaim, the headlining slots at global festivals and the chart-topping albums, the members of alt-J are still able to describe their lives as “normal,” at least as much as possible given their vocation. Unger-Hamilton says he hopes the band can continue to stay grounded even as they enjoy the fruits of their labor.

“We’re now in the position of being able to make quite a comfortable living while making music,” he says. “That’s a huge, huge blessing. We never thought that was going to be
the case. We were a university band who thought we’d enjoy making music together for a few years and then maybe go our separate ways. I think now we’re actually doing what some people dream of doing, which is to have this as our sole job. Now that means we get to live in London, spend our time traveling, writing songs or hanging out at home. That’s pretty awesome.”