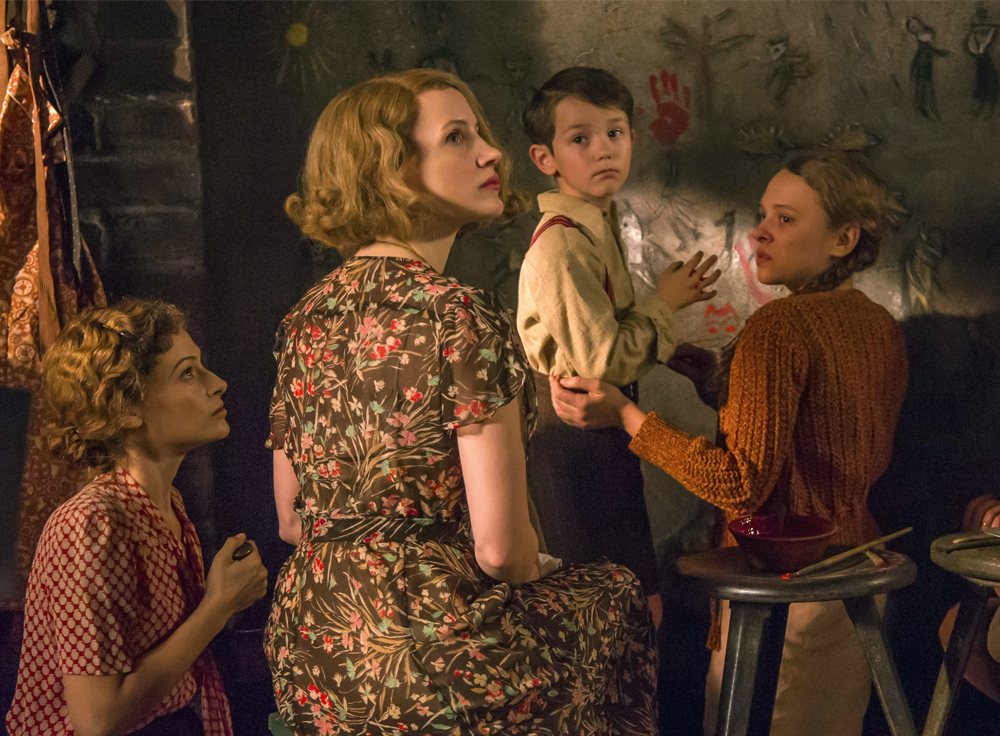 Here’s a Look at the Refugee Shelters Designed By Ikea

The Zookeeper’s Wife tells the true story of Jan and Antonina Zabinski, Polish socialites and zoo owners who are thrust into the world events of WWII after a Nazi bombing, and later drunken German soldiers killing the majority of the animals, destroying their business.

As a result of the invasion, a massive amount of the population fled Warsaw. But the Zabinskis remained, and used their connections to convert the zoo into a hog farm. On the surface it was a way to save the zoo from disrepair and complete collapse, so it could be reopened after the war.   In reality, Jan knew that serving the Nazi war effort would create an opportunity to smuggle Jews and other Polish citizens facing persecution and death out of Warsaw, into the countryside where sympathetic families would hide them until the war ended. Jan collected scraps from the Nazi constructed, walled off Jewish ghetto to feed the pigs, smuggling Jews past the guards, buried in truckloads of garbage.

As an added layer of concealment, the zoo became a Nazi hangout and test grounds for Lutz Heck, a pre-war associate of the Zabinskis turned Nazi geneticist, serving a cause that wanted to “purify” stock like horses and cattle in the same way the fascist movement sought to create a master Aryan race.   It’s a solid film, with a standout leading performance from Jessica Chastain, who nails everything from the Polish accent to the life of constant fear that comes with hiding dozens of refugees from a tyrannical empire for years on end.

Unfortunately, both the real-life faith of Antonina Zabinski and some of the best parts of the true story were discarded when The Zookeeper’s Wife was translated from best-selling book to the big screen.

WHEN BOTH HOLLYWOOD AND CHRISTIAN MEDIA GET IT WRONG

Depending on who you ask, the Zabinskis either had no faith at all, or were a WWII Billy and Ruth Graham. Director Niki Caro keeps the camera pointed away from both Jewish and Christian faith, besides a brief scene of two Rabbis praying as they face certain death on the business end of a Nazi flamethrower.

On the other end of the spectrum, the Christian Post calls The Zookeeper’s Wife “the real-life story behind the heroic efforts of two devout Christians.”  In real life, Antonina lost her parents in the Bolshevik Revolution in Russia as a child, an event that drove her even deeper into her Catholic faith. Antonia never left the house without a Catholic medallion around her neck. Both of the couple’s children were baptized.

Jan, however, couldn’t have been spiritually further from his wife. Raised by a devout Christian mother and a staunch atheist father, Jan followed in his father’s footsteps, and spent his entire life looking down on organized religion.   Before anyone starts yelling about discrimination against Christians and Jews or censorship, it’s important to note that the movie adaptation leaves out several other key pieces of the story.

The majority of Jan’s legacy is left on the editing floor.

In the film version, he’s almost badgered into helping the Jews by Antonia. But Jan should go down in history as one of Poland’s greatest heroes. In addition to smuggling food in and people out of the Jewish ghetto, Jan sabotaged trains, built bombs and even poisoned the pork raised in the zoo, which was shipped to Nazi troops.

Caro is a director without a single hit to her name, so it’s quite possible that she just wasn’t prepared to translate a story of this magnitude. It may have been a lack of skill, not active discrimination against Christianity, that omitted Antonia’s faith and Jan’s extensive heroics.

But the end results are the same: Faith was erased from this film. It’s a microcosm of the bias that often happens on both sides of the Christian-secular divide.

On one side, you have Hollywood, which is normally only interested in Christianity if it leads to ticket sales. On the other side is a Christian press all to eager to paint over the legacy of an avowed atheist in order to wrap the story up with a picture-perfect Christian subculture bow.

It’s the same movement that has created an untold number of click-bait stories about celebrities who do not claim, or even have interest in, Christianity. For example, Ryan Gosling was raised Mormon, a faith system he no longer follows.   Since Gosling has made vague comments about being “religious” in interviews, several Christian outlets grabbed onto a single word and assigned born-again status to a celebrity who has never made any public comments to confirm it.

Unlike Hollywood, the Christian media does have a spiritual directive to tell the whole truth, rather than alter a story to fit the preferences of an intended audience. While there’s not much to do about the entertainment industry’s spin on The Zookeeper’s Wife, Christians should be weary of putting any trust in faith-based news outlets willing to rewrite history for more clicks.

AN IMPORTANT STORY, DESPITE ITS FLAWS

Just because the faith of Antonina Zabinski doesn’t appear in the movie doesn’t mean you should stay home from the theater.

To its credit, the movie does an excellent job at humanizing Jews under persecution, rather than lumping them together as a persecuted rabble. It’s also a film that works because there are lots of stories from the perspectives of heroic soldiers and Jewish survivors of WWII, but far fewer about those living in occupied countries who did what they could, with what they had to pursue justice.   Finally, this story serves as a stern warning about history repeating itself. Today, the world’s refugees have a different skin tone than European Jews, but the crisis is no less real.

And the white supremacist ideology that caused the death of 50 million people in WWII is not only alive and well in the United States, but is a growing trend.   The Zookeeper’s Wife is a movie you won’t regret seeing. But to get the full story of how an incredibly brave Christian stood shoulder to shoulder with an incredibly brave atheist to save hundreds of lives from genocide, a trip to the bookstore is required.