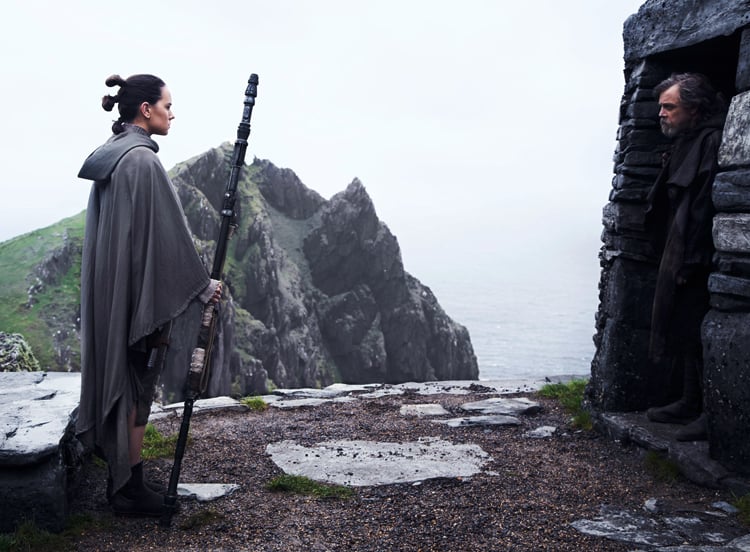 Star Wars straddles two clashing genres: science fiction and myth. Science fiction fuels the saga’s most imaginative elements—the Death Star, wookies, snowspeeders—while myth fuels the saga’s conflict—the Light and the Dark Side. The first is boundless, the second constrained in tradition. For The Last Jedi to stand among the saga’s best, it would have to transcend Star Wars’ mythic boundaries and reach beyond the legacies of past installments. It does, with triumph.

Storytelling in Star Wars has never been complicated: There are good guys and bad guys, and they fight each other. There might be some family reveals along the way, but the conflict itself doesn’t become more complicated than good vs. evil. This mythic order of heroes and villains exists in a detailed and nuanced universe, but isn’t very nuanced itself. You can still make a good movie out of that classic structure, obviously, but its narrative simplicity does mean Star Wars is wont to repeat itself.

Case in point is The Last Jedi’s predecessor, The Force Awakens. It’s a perfectly good Star Wars movie, but also a safe one. It’s an episode that many thought would overhaul the franchise but was really just a fresh coat of paint. The new cast charmed your socks off, but at the end of the day, it was the same story as the old movies.

In effect, The Force Awakens stayed within the rigid walls of Star Wars myth. It softened the appearance of new characters by debuting them next to the classic faces and archetypes Star Wars fans had been trained to love: Han Solo, Princess Leia, Chewbacca, a mysterious Sith who appears only in holograms.

The new characters themselves wore old skins: The villain had a black helmet, the hero grew up on a desert planet and the pilot(s) were always cracking wise. It was a fun watch, but we’d been there. The repetitious story kept us at cruise control, but the franchise was due for a jump to light speed.

And the jump is here. The Last Jedi presents everything that made you love Star Wars in a bold, new light, and it does so with delicacy, flourish and, above all, confidence. This is not Empire Strikes Back 2.0. That mythic formula is reordered to be sleeker, weightier and free of nonsense. This movie bangs.

The Last Jedi leaps between high-stakes action scenes so often there might be enough confrontations here to power two movies. A safer flick (or dare we say, an older Star Wars) wouldn’t have been this ambitious, but Last Jedi isn’t messing around. It’s on a mission.

Parts of The Last Jedi are enormous, parts miniscule; parts are unexpected, parts anticipated; parts are unadorned, parts absolutely bonkers. There’s a spirit of adventure here that pushes the story (and its universe) beyond the boundaries of past movies.

It doesn’t rewrite the rules of Star Wars, per se, but if there’s a rule that isn’t explicitly written down, The Last Jedi toys with it. This is the Star Wars movie that steals from the bank in Monopoly (nothing says they can’t do it), and the effect is revitalizing and energizing. Watching it, you’re not thinking about any other Star Wars movie. It’s just this one. You’re drawn in.

That’s when the series flexes science-fiction muscles you never knew it had. The Last Jedi takes us to tons of new planets, shows us handfuls of new creatures and expands the power of the Force beyond imagination. Some of the revelations might blow your mind, and others might make you raise an eyebrow, but every choice is bolstered by a complete sense of fearlessness on behalf of the moviemakers. That matters.

There are choices being made here, and that sense is so prevalent that you have no choice but to go along for the ride. It’s a sign of The Last Jedi being not just a great Star Wars flick, but a great movie, period. There’s a craft to it. It’s artful.

And that new philosophy, that weirdness and bold exploration, means The Last Jedi is blessedly free from nostalgia. This movie doesn’t fret about legends past, it’s only about the new characters and the new conflicts. This isn’t a response to A New Hope or Empire, it’s just a sequel to Force Awakens, and that means the viewer can just sit, be present, and become lost in a galaxy far, far away again.

A new take on nostalgia

The Last Jedi treats nostalgia not by feeding it carbon copies of old ideals, but instead reshaping those ideals into a new context, one that accounts for innovation and creativity and vision. When we view nostalgia as something we can shape or renew, we’re empowered to evolve the past into something richer, something that invites others into the fiction we love so much.

The Last Jedi is a gateway. It propels the saga forward, but remains distinctly Star Wars. It’s possible for anyone to find a point of attachment over its two-and-a-half hours.

Star Wars couldn’t exist without the duality of expansive science fiction and foundational myth, and the way The Last Jedi treats each of those pillars makes it a tentpole of the franchise. It finds a balance between gorgeous imagination and enduring tradition, and that gives it a surge of resonant, ringing power.

The Mayor of Nazareth Just Canceled Christmas in the City