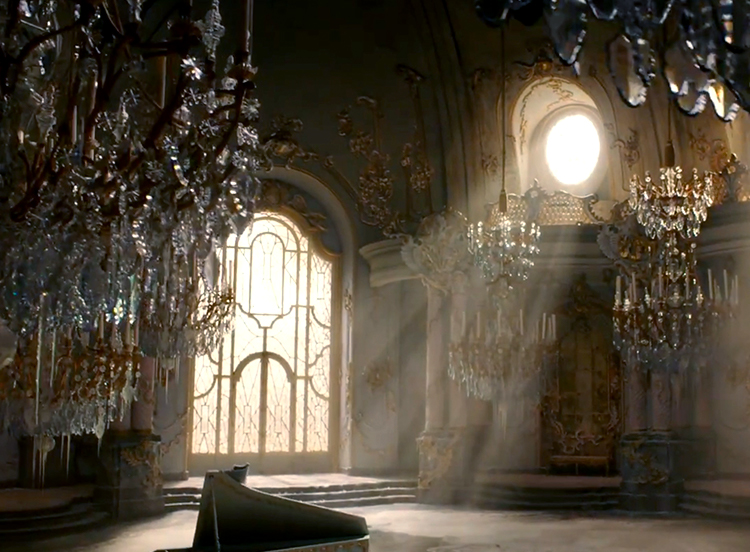 If I could use my eyebrows the way Emma Watson does, everyone would know where they stand with me. Lumiere and even Cogsworth watched those eyebrows. The Beast dared to hope because of those eyebrows. Only Gaston didn’t get that Emma was using those arches to give him the finger.

Beauty and the Beast got me thinking not so much about Emma Watson’s eyebrows, but about the nature of freedom and slavery.

The characters in the film are all trapped in different ways—some that have been discussed for a long time.

Most obviously, Maurice—and then Belle, taking his place—is trapped in a tower by the Beast. Maurice and Emma are later locked up in a carriage by Gaston and the villagers, to be more permanently isolated in a madhouse.

The thing is, their release from these fates is actually quite straightforward. It’s the less visible shackles that are harder to escape from.

Belle is stuck in provincial France. A sense of duty to her widowed father binds her to a village she feels to be too small—geographically and mentally—for her spirit. She dreams of Paris, and of Verona, home to Romeo and Juliet of her favorite Shakespeare play.

Gaston is stuck in his delusions of grandeur. His self-obsession makes him blind to Belle’s revulsion at his presence, makes him deaf to her declaration that she will never marry him.

One bound by duty, the other by delusion. Attitudes. Shackles on the inside.

And the most powerful shackle in the film—above Belle’s duty and Gaston’s delusion—is the enchantment that binds the Beast and his servants.

Their enslavement is not immediately apparent. I mean, they live in a gorgeous castle, and the singing and dancing furniture seem pretty happy. But they essentially inhabit an alternate reality in which they are something less than human.

The Beast is powerful in his brute strength yet ironically emasculated by his terrifying form. He’s unable to lead a life outside of the castle because of his appearance. His fate—and that of his whole entourage—is controlled by the rose in the west wing.

With passing time, with every petal that falls, they become less and less human. The curse consumes and replaces reality.

It’s an enchantment triggered by the Beast’s pride, his heartlessness toward the beggar-enchantress who approached him for refuge long ago. The curse in the film creates a striking visual for the shackles that our character flaws or attitudes can lock us into and the dramatic effects and harm that this can cause to those around us.

Character and attitudes are powerful because they alter our reality. They become our reality so that we may not even see that we are enslaved.

Consider that at the end, it turns out that many of the village folk have also been under the curse.

It’s a detail present in both the 1991 Disney cartoon and in this year’s remake – but not explained or elaborated on in either.

I guess I’ve been thinking a lot about freedom anyway. After all, I work part-time for the world’s largest anti-slavery organization. The same week I watched Beauty and the Beast, we also had our annual Australian Prayer Gathering where we stepped into the breach on behalf of the millions of global poor who are trapped, whether in sex slavery, forced labour, in trauma from abuse or in a system that doesn’t protect them when the powerful exploit them.

We talk about violence as a “hidden plague,” the underlying cause of enduring poverty in the world. It robs people of their dignity. They lead a less than human existence because they are controlled by their oppressors.

So yes, freedom and slavery were on my mind.

And what was it that broke the spell, in the end?

But it’s no ordinary love. It’s not as simple as Sleeping Beauty. I mean, that was just a kiss. No real love required there.

In a way, Belle’s initial sacrifice is the pivotal moment. This selfless, illogical act confounds the Beast. It shows him a different way of living, for another person and not just for himself. This is what makes their whole relationship possible.

Later, for the Beast, love means granting Belle freedom. In so doing, he submits himself to his slavery, because there aren’t many petals left on that rose and she is his only hope of release and redemption.

But she comes back for him. And the love that has been everywhere from the start—between Belle and her father, and then between her and the Beast—breaks the curse.

And then everybody is free.

Beauty and the Beast has always been my favorite Disney cartoon, but I always believed the moral to be the usual lesson around beauty being more than skin deep, seeing beyond the exterior, not being superficial.

Yet the longer I dwell on it, the more I see that the story is also about sacrifice. About love so powerful it transcends self and focuses on the other. Covers all manner of ugliness—inside and out. Transforms. Brings freedom and restoration.

After all, the story of redemptive love is a tale as old as time.

writes about faith, being Gen Y, and life as an (ex) expat. She previously served at International Justice Mission’s field office in Bolivia and now works for IJM Australia.

Study: 14% of American Christians Left Their Churches After the Election