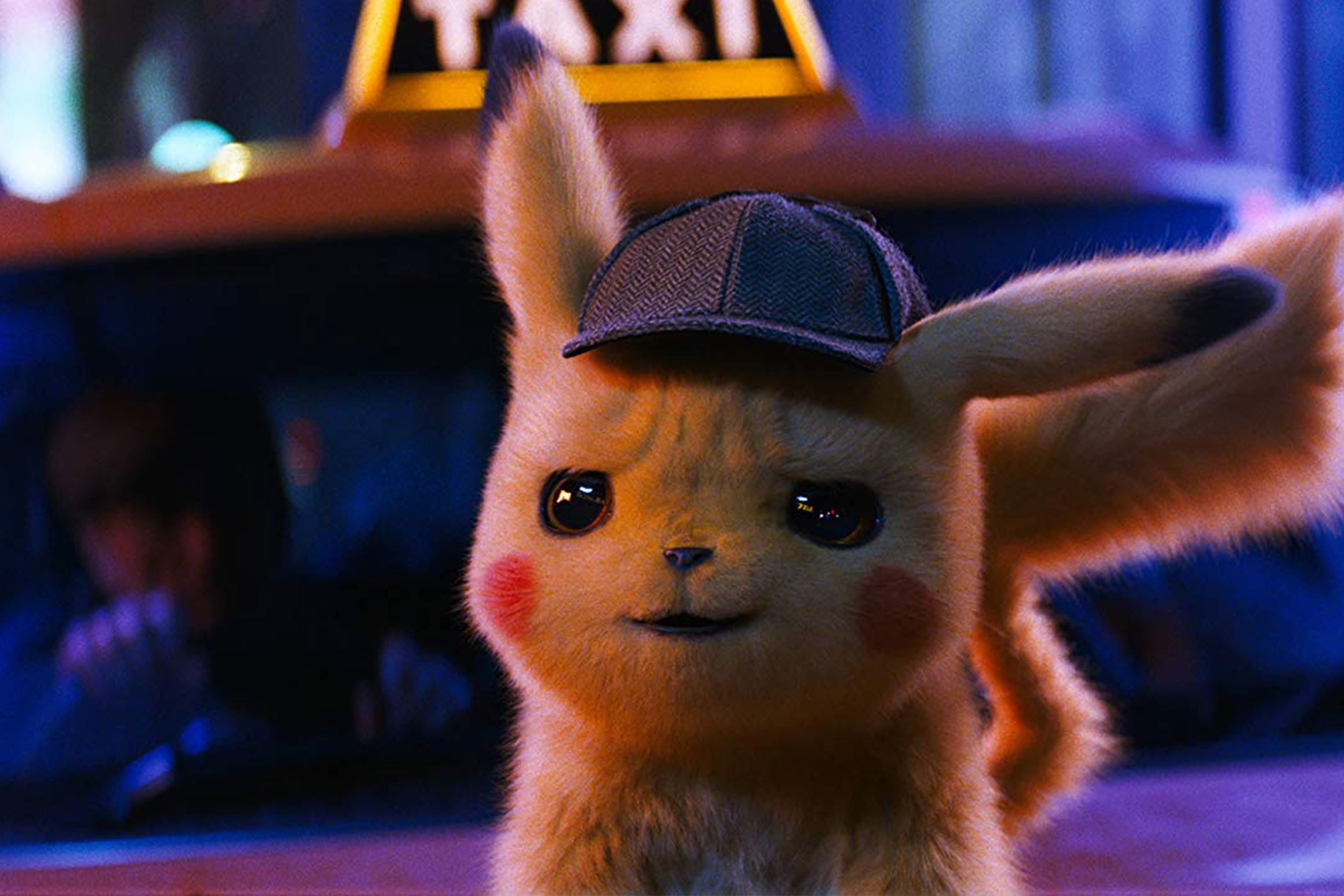 There are two ways to explain Detective Pikachu, and the gap between those descriptors represents the movie’s biggest challenge: making you just go with it. This movie is wild, zany, rambunctious, easy to cheer for …and total nonsense. You just have to go with it.

Here’s the first way to describe Detective Pikachu, for those who have (somehow) never heard of Pokémon or have never played a Pokémon video game: There’s a yellow mouse who shoots electricity. His name is Pikachu (rhymes with “peek a boo”) and he lives in a world where all these fictional fantasy creatures called Pokémon (rhymes with “toke a bong”) exist alongside humans as companions and partners. Pikachu, however, is special because he solves mysteries. His full name is Detective Pikachu and—for mysterious reasons—he can talk to one of the people, in this case, his crime-solving partner. You might not understand Detective Pikachu right now, but you will love him very much.

Perhaps that raises a couple of questions. Hang on.

The other way to describe Detective Pikachu is simpler, but it only makes sense if you know anything about Pokémon: In this movie, Ryan Reynolds voices Pikachu, there are lots of Psyduck jokes and Bill Nighy tries to link his brain to a Mewtwo. There’s also a Charizard and a Blastoise and a Gengar and more than one Bulbasaur. At one point a Ludicolo shrieks. You are going to love this movie very much.

For Pokémon fans, Detective Pikachu will inevitably rock. It has tons of Pokémon in it, Ryan Reynolds is reliably funny, sheer fandom bursts forth from every scene and somehow every live-action manifestation of the Pokémon—who until now have always been cartoons—works to impossible effect. The movie’s bouncy and gleeful and fun, fun, fun.

Fans will overlook Detective Pikachu’s shortcomings because it hits so many nostalgia buttons it will launch the recognition-fueled pleasure centers of your brain into overdrive. But if you don’t carry any relationship with Pokémon into Detective Pikachu, hold on for dear life, because to the uninitiated, this is an utterly wack mouse-detective movie.

Pikachu doesn’t do a ton of work to accommodate non-fans. In a time of specialized media, that’s forgivable, but it does lend the movie’s myriad nods to the Pokémon games and cartoons with a degree of exclusivity.  When the movie goes off the rails at the end—like, evil-kid-playing-Roller-Coaster-Tycoon off the rails—the divide will be most definitive. Either you’re in or you’re out.

That’s a little bit of a bummer considering how inclusive Pokémon is in concept. The property achieved global dominance precisely because it was easy to understand, access and make your own. Kids, adults, boys, girls, teenagers, geeks, jocks—everyone liked Pokémon. The experience was open to anyone. This movie is not.

However, Detective Pikachu’s funneling of its audience does betray a central story that’s actually very universal, and rather sweet. Look, the movie’s smarmy as heck—Reynolds’ Pikachu has an attitude and a cackle-worthy sense of sarcasm—but the main storyline has a lot to do with unity between people, harmony in all things and loving people’s baggage as part of loving them, period. It feels strange to say it both for the sheer audacity of this movie’s existence and the misconceptions this phrase usually creates, but Detective Pikachu is a “family film” through and through. It’s a spark plug, definitely, but beneath all the shocks and barbs it has a firm, undeniable heartbeat.

And that’s what will probably carry Detective Pikachu home for most, whether you’re the biggest Pokémon fan in the world or have never set foot in Professor Oak’s lab. This movie’s so unabashed about its own dorkiness and its own sentimentality that you have no reason not to cheer for it. It’s like a modern-day nerd without the toxic fan culture and sense of entitlement. It has big-kid dreams minus the delusion. You want to ruffle its hair and give it a ride on your shoulders.

Go see Detective Pikachu. It’s not perfect, and at times it is complete nonsense, but you might love it despite, maybe even because of, its flaws. The world feels awesome inside this movie. Maybe for you, it will make the world outside the movie feel awesome, too.