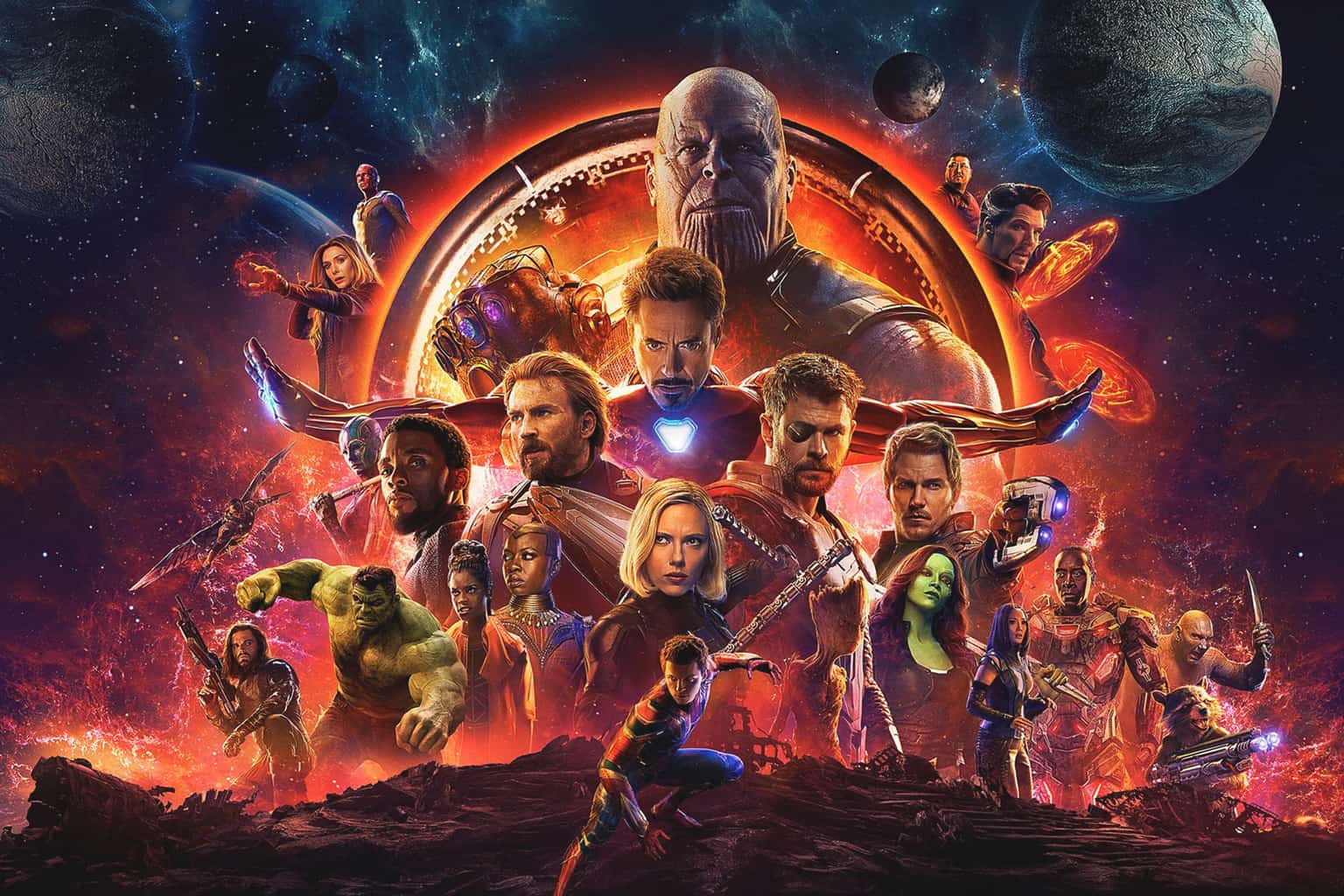 By any measurement—cast, anticipation, box-office take—Avengers: Infinity War is one of the biggest movies of all time, so RELEVANT decided to grant it our biggest review of all time. Our deep bench of culture critics assembled themselves to break down all their thoughts, feelings, and ideas on Marvel’s latest epic.

What was your first thought when the credits rolled on Avengers: Infinity War?

Tyler Huckabee: I need a hug.

Lesley Crews: Is this the first superhero movie in which the good guys don’t win?

Travis Roberts: This was the most physically exhausting movie since Mad Max: Fury Road.

Tyler Daswick: Dang. That was so, so close to something incredible.

Abby Olcese: It reminded me of C.S. Lewis’ The Last Battle: apocalyptic and painful and unsafe. These characters’ lives are finite, and they can’t always win.

Josh Pease: It should have felt cheap to have Howard the Duck show up out of nowhere as the guy who saves the day, but somehow it worked!

Olcese: Crowded. Each successive Avengers movie has felt like an exercise in how many characters can fit into one film before it breaks down. I definitely felt the strain at times here, but massive credit to the Russo brothers for making something watchable out of it.

Huckabee: Episodic. Infinity War has no mercy for people who haven’t kept up with the franchise. It fully commits to Marvel’s new vision of movies essentially acting as long, expensive episodes of the same TV show.

Daswick: Self-defeating. This movie has some of the greatest Marvel moments ever in it, but it’s going to be remembered for the ending, and that ending will make a lot of people really, really frustrated.

Which hero delivered your favorite performance?

Olcese: Zoe Saldana as Gamora. She had a lot of emotional baggage to sort through in this movie, and I thought they handled it wonderfully. The conversation about Thanos being responsible for all of Gamora’s “worst” traits, like her toughness and fighting prowess, was interesting, because those traits are also her strengths. It added a lot of retroactive complexity to her character.

Crews: Doctor Strange. For a character who hasn’t really been spoken about in any of the Avengers films, he fit right in with the others and really delivered on his powers.

Daswick: Let it be etched in stone: Tom Holland is the best Spider-Man we’ve ever had (and for the record, there’s never been a bad Spider-Man). He might be the most pure and winsome Avenger already.

Roberts: I love how the Russos set up Paul Bettany’s Vision as the heart of the film. There was a powerful through-line of sacrifice, and an open question of whether a necessary evil is ever acceptable.

Which performance was your least favorite?

Crews: Star Lord. I felt like he was kind of whiny, and came off as uncharacteristically weak throughout the film. Understandable, all things considered, but not cool.

Daswick: I think Chris Pratt is terrific, but he was lifting a little too much weight here. It was weird to put him at the center of so much emotional conflict, while guys like Captain America and Black Panther were relegated to the background.

Huckabee: Peter Dinklage’s performance did nothing for me. It was the movie’s weakest link.

Roberts: I wish they had given T’Challa more to do. The Black Panther is one of the MCU’s most compelling characters, and I would have happily given up some of the New York scenes to allow for more time in Wakanda.

Olcese: It’s a tie between Scarlet Witch and Vision. Their subplot was melodramatic and didn’t feel like it worked with the rest of the film. Paul Bettany and Elizabeth Olsen’s performances were fine, but if anything, Infinity War revealed how little those characters have added to the MCU.

Evaluate Thanos: Great villain, giant raisin, or somewhere in between?

Pease: Thanos isn’t the best Marvel villain (Loki and Killmonger hold that crown), but he was a million times better than I expected, because Josh Brolin is amazing.

Daswick: He’s a great villain by Marvel standards. The movie was smart to spend its best arc on him, and Josh Brolin’s performance was sneaky strong. He’s definitely still absurd-looking, but I think we saw the best version of Thanos possible.

Olcese: Everything we’d seen of Thanos up to now just made him look like a giant malevolent purple dude in the sky, but Infinity War gave him depth and pathos, which I wasn’t really expecting. The most intriguing kind of villain is one who thinks they’re doing the right thing, and Thanos is certainly that.

Huckabee: Thanos was the only character who undergoes a significant transformation in this movie, really developing as a character and experiencing a very twisted sense of tragedy. I’m not sure I’ve ever seen a movie foreground the character development of its villain in that way.

What’d you make of the ending?

Olcese: The movies I tend to gravitate toward often involve a lot of sacrifice and uncertainty—The Two Towers, Rogue One, The Last Jedi. That being said, I really dug the ending. The following films are going to have a very different tone.

Crews: I saw it coming about halfway through the movie, but I was really pleased with the way it was executed, and I appreciated the swerve away from a stereotypical Disney/Marvel cookie-cutter ending. As it is, we have a reason to be on the edge of our seats to see how everything plays out.

Daswick: The ending makes Infinity War inseparable from everything that came before and everything that will follow, and not really for the better. A time-travel narrative seems inevitable now, and I found myself wondering who’s going to come back to life instead of mourning the losses in the present. I wasn’t there for it.

Pease: If it could exist in a world where we didn’t know about things like contracts and sequels, it would have been perfect. But we do, and so immediately after feeling all the feels I realized “oh … right … that meant nothing.”

Huckabee: It’s hard to evaluate this ending without knowing how it’ll resolve in Avengers 4. It’s audacious and deeply affecting on its own (I cried real tears. Me! A grown man!), but it’ll be tough for the follow-up to stick the landing.

If you had a chance to tweak anything about the movie, what would you change?

Pease: Turn the entire film into a Rocket and Thor road trip dramedy.

Olcese: I’m sure Marvel has an endgame planned here, but it seems weird they’d off Black Panther. His absence is dramatic, but the fact that he’s only had one film, which made tons of money, suggests he’ll likely be coming back. That means all those deaths at the end of the film, with a few exceptions, probably weren’t final, and that feels like a cop-out.

Crews: More hardcore moments for women. My favorite scene was when Okoye, Scarlet Witch and ScarJo come together to fight off one of Thanos’ soldiers in Wakanda. Shuri could’ve used more screen time, too.

Huckabee: This movie needed about 10 percent more Captain America and Crew. Cap didn’t get a lot to do until the end, and I think we all were excited to see more interactions between his “Secret Avengers” and T’Challa, Shuri, Okoye and the rest of the Wakandans.

Which existing characters would you like to see foregrounded in a future Marvel movie? Any unused characters from the comics you’d like to see brought to screen?

Olcese: We should go with a Howard the Duck reboot, and I’m only sort of kidding. Chip Zdarsky’s 2015-16 run on the comic is pretty good, and would make a weird, fun movie! But if we’re being real, I’ve wanted a Ms. Marvel film since G. Willow Wilson started working on the series. Kamala Khan is a great, vibrant character, and it’d be awesome to see a Marvel movie as fun as Spider-Man: Homecoming, but with an added dose of feminism and diversity.

Huckabee: I’m ready for Brie Larson’s Captain Marvel and Chadwick Boseman’s Black Panther to be the faces of the next generation of Avengers. And if Marvel’s looking to launch new franchises, Ms. Marvel does seem like the likeliest and most thrilling possibility.

Daswick: Can Mark Ruffalo’s Hulk be in his own movie already? His reluctance to appear in Infinity War was a fun gimmick, but at the end of the day, I was bummed the green guy only had one little action moment. Give us Hulk: Ragnarok.

Crews: I’d die for a movie about Okoye and the Dora Milaje, but I’m also psyched to see Adam Warlock enter the franchise. Charged with guarding the soul stone, Warlock leads the fight against Thanos in the Infinity Gauntlet comic book crossover. I bet he’s a key member of Avengers 4.

Roberts: I’m hoping the new guard—Black Panther, Dr. Strange, Falcon, Scarlet Witch, Vision, and Spider-Man—comes back with Captain Marvel next year. Of course, if Marvel’s plumbing the comics to bring some new characters into play, I’d love to see Mr. Fantastic come aboard, as well as my Canadian hometown heroes: Alpha Flight.

Where should the MCU go from here?

Roberts: Let the original Avengers sacrifice themselves to save the universe and make way for the new guard. Marvel’s at its best when it holds the status quo with an open hand, allowing B-characters like Falcon to step up into the A-list. Embrace the limitations of the medium—these actors aren’t growing any younger—and give us a living, breathing universe that grows in unpredictable directions over the next decade and beyond.

Pease: After Howard the Duck’s ascendant victory, I have to assume we’re getting a one-off from him next.

Olcese: The symbol on Nick Fury’s pager in the post-credits stinger sets us up for Captain Marvel (by the way, S.H.I.E.L.D. uses pagers? really?), and I’m hoping the MCU will continue to bank on the success of Black Panther and start foregrounding more diverse characters.

Daswick: I’ve been begging these movies to assign their world-changing story with evidence that the world actually changes, but after Infinity War’s slate of false losses, I’m ready to quit that fight. Instead, let’s keep exploring the fringes. Give us more Ragnaroks and Black Panthers. Make it weird. Surprise me. Someone call Howard the Duck.