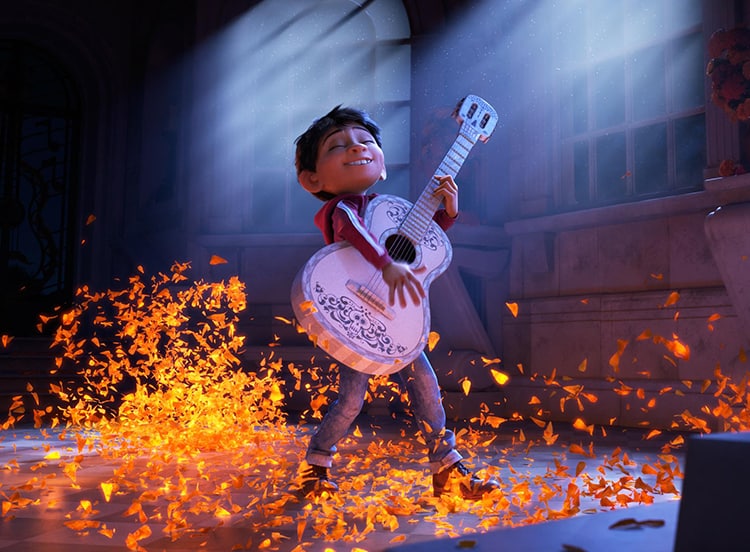 At its core, Pixar’s newest film Coco is about remembering our loved ones long after they’ve passed and sharing their stories for years to come. This simple, heartwarming message aligns nicely with the cultural values of the Mexican holiday, Dia De Los Muertos.

As expected by most Pixar fans, this take on the holiday leads to some tear-jerking moments in a well-realized animated setting with an attention to detail that continues to prove Pixar’s unmatched dominance in world-building. The Land of the Dead as seen in Coco is entirely designed from scratch and is truly unlike anything you’ve ever seen. The story, at face value, is far more familiar, though, and it’s mostly predictable for anyone who watches plenty of movies.

But what establishes Coco as one of Pixar’s best films (and thus one of the best animated films, period) is its deeper, underlying message. Yes, music and family are celebrated throughout the movie, and there’s hardly a moment you’ll forget this is a deeply Mexican-inspired story with common appeal. But what isn’t common is its stance on “listening to your heart” and following your passions.

Warning: The following contains minor spoilers for Coco about themes and general conflicts, but nothing specific pertaining to the plot beyond what’s revealed in the trailer.

As the movie unfolds, we find out that 12-year-old Miguel (voiced by Anthony Gonzalez) wants to be a famous singer, but his family rejects all forms of music in their household. This is because Miguel’s great-great-grandfather left the family to pursue his musical career, and now Miguel finds himself torn between rebelling against his family to realize his own dreams or staying close to his family and what they want for him in life.

This central conflict resonates. The viewer wants Miguel to have his dream, of course, but not at the expense of leaving his family behind and forgetting about what matters aside from his own wants. What starts as a standard “follow your dream” story arc slowly becomes a perplexing cautionary tale about the potential dangers of ambition, even when it appears to be totally innocent.

In many movies and shows, the “Ambition is Evil” trope is used to flesh out one-dimensional villains who set out to get what they want at any cost, usually in regard to fame and money. Coco introduces a new layer to this idea by softening it with the desire to “follow your heart” over trusting what your family wants for you, hoping that your heart is “good” enough to follow in the first place.

For Christ-followers, there is an idea that basic desires of the heart are not always noble. Yet in many movies and shows, especially made by Disney, it’s a given that one’s heart is a proper map for optimal success in life, whether it be romantic, heroic or in Coco‘s case, vocation. So it’s fascinating to see a Pixar movie reject this typical theme in favor of a deeper message: that what we love to do, when solely in the service of our own desires, can lead to regret and perhaps evil, if we’re not careful.

Coco‘s internal debate over this sets up a fascinating conversation about the balance between personal ambition and responsibility to others that I don’t believe a lot of parents will see coming after watching the film with their children. It might be a wake-up call, for example, to see how Miguel’s worldview is so heavily influenced by his idol, Ernesto De La Cruz (voiced by Benjamin Bratt), a famous singer who championed the idea of “seizing the moment” in his lifetime.

In the movie, De La Cruz says, “The music … it’s not just in me. It is me.” First, he’s defining himself by his passions. There’s a song later on that goes into more detail about how “the world is his family,” justifying his decision to chase after his dreams at any cost.

De La Cruz also says, “The rest of the world may follow the rules, but I must follow my heart.” Miguel hears this as permission to steal a guitar, which kicks off the movie’s adventure to the Land of the Dead. Finally, De La Cruz states, “I had to have faith in my dream. No one was going to hand it to me. It was up to me to reach for that dream, grab it tight, and make it come true.”

At first glance, much of what De La Cruz is passing along feels like generic advice aimed at young children. “Follow your dream! Do what makes you happy! Success is yours for the taking!” But in Coco, these platitudes are deconstructed within the context of how our choices affect others, even for generations.

Coco holds up Mexican traditions and values and uses them to teach people about the dangers of ambition and how harmony between family, faith and passion should be an ideal worth having. This is the kind of deep storytelling Pixar has built its stellar reputation on, which is why Coco doesn’t disappoint.

Beth Moore: No, God Does Not Put Up With Secret Sins From His Servants for ‘the Greater Good’

3 Things to Be Thankful For