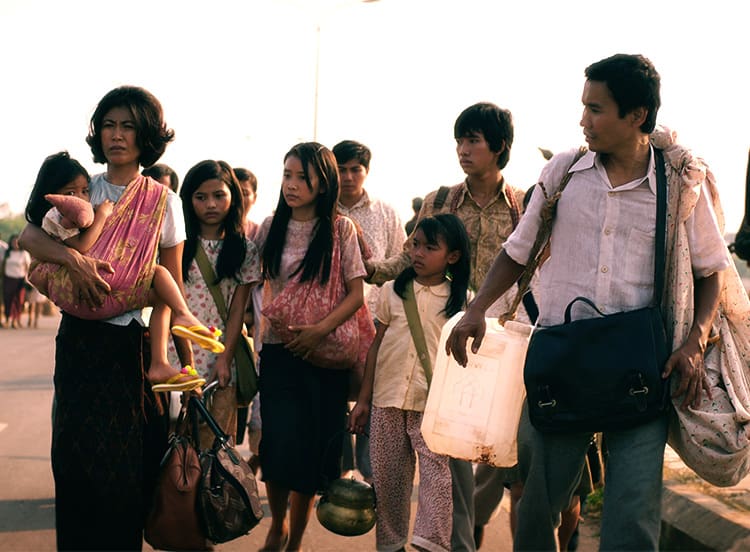 One of the most unexplainable phenomena of modern entertainment is how Netflix can create such amazing TV (Stranger Things, House of Cards) and yet tank on original movies, even when the odds seem to be in their favor (See the Brad Pitt led War Machine from earlier this year. Better yet, don’t see it.).

The streaming giant started to turn things around this year with Okja, an offbeat adventure movie about a young South Korean girl and her genetically modified super pig, which features Jake Gyllenhaal and Tilda Swinton, embraced by Netflix subscribers and the Rotten Tomatoes aggregator alike. Whether or not Netflix can produce a bonafide hit will likely be answered this December, when the David Ayer-helmed (Fury, End of Watch) supernatural thriller Bright drops with Will Smith as the lead. With a reported $90 million budget, we’re about to find out if a streaming service can truly deliver a blockbuster experience to rival theaters.

In the meantime, Netflix is pushing hard on First They Killed My Father, a true story based on an international best-seller by the same name, which follows elementary school student Luol Ung as she is forced to flee from the city along with her parents and siblings, who are on the run because Communist forces are butchering the families of employees of the old government.

No, it’s not too early to start talking about the chances of First They Killed My Father taking home hardware at the 2018 Academy Awards for best foreign language film. But oddly, this movie would have never been made without a massive culture and critical flop.

Seventeen years ago, Angelina Jolie was in Cambodia shooting the universally panned video game-to-movie Tomb Raider adaptation when she purchased the memoir First They Killed My Father: A Daughter of Cambodia Remembers by Luol Ung. It was the spark that led Jolie to adopt Cambodian orphan Maddox in 2002, then return to the country to build 11 schools and a medical clinic in the capital city of Phnom Penh to help children affected by HIV.

Turning the gut-wrenching memoir into a film is a passion project Jolie fought for years to bring to the screen. On paper, it’s both an admirable feat and something that might not work. Foreign films just aren’t hits in the United States, and 99 percent of it is in the native Cambodian Khmer language. And this is a movie made up of Cambodian actors, shot on location, so there’s nary a famous face from Hollywood to attract viewers.

On one hand, it’s great news that a project like this can come out of a Hollywood climate still figuring out how to correct the problem of a century of whitewashing. On the other, it’s pretty tough to get Americans to sit through two hours of subtitles. Netflix doesn’t release numbers, so it’s quite possible this movie could rack up awards and press without many people ever actually seeing it.

Growing up in rural west-central Illinois, I was influenced from a very young age by the Laotian refugee population, who fled Communism and plopped down in the middle of our Irish/German Appalachian backcountry thanks to local church sponsorship. Their rice was mixed with our freshly killed deer, both literally and metaphorically, for a comically odd and wonderful childhood where I can remember Southeast Asian pop music sung in Lao almost as vividly as Garth Brooks mega-hits.

As I progressed through childhood, some of the details started to spill out. My half-Asian cousin’s uncle had been thrown in prison at the age of 9 in Thailand. My grandparents’ neighbor had been held in a dog cage for months after being captured fighting in Laos for the United States during the Vietnam war.

It wasn’t until I left for college in the Chicago suburbs that I discovered most Americans had been taught next to nothing about the Communist genocide in Southeast Asia, which left a quarter of Cambodia’s population dead. The Communist Khmer Rouge army went so far as to kill anyone who wore glasses, because they were assumed to be able to read, and literacy was a threat to the revolution.

As important as refugee stories are, they often translate into bad movies that fall prey to stereotype. Last year’s Disney movie Queen of Katwe, may have been based on an inspiring tale of Ugandan chess champion Phiona Mutesi, even A-listers like David Oyelowo and Lupita Nyong’o couldn’t save the story from being more or less like every other average movie about poor people in a developing nation.

What makes First They Killed My Father stand out is Jolie’s directing, which lets the viewer feel both the joy of childhood and the ache of seeing it ripped away. American film has a bad habit of showing refugees as sad, malnourished victims rather than three-dimensional characters. Angelina brought her best for the award-winning World War II epic Unbroken, and puts just as much effort and creativity into ushering the viewer through a very difficult watch.

There’s no point in trying to sugarcoat it; this is a difficult movie to get through. At two hours and 16 minutes, more of First They Killed My Father should have been left on the cutting room floor, for viewers to discover by diving into the memoir. And no matter how much you love movies, and how much you care about this subject, reading hours of subtitles is mentally taxing.

But this one is worth the effort. Jolie assembled hundreds of survivors of the genocide and their children to fill out the cast, so many of these actors lived through what they’re portraying on screen. As Christians, embracing a holistic pro-life mindset includes understanding why millions of people lost their lives to fascism.

First They Killed My Father should cause you to question why the American education system largely ignores one of the largest genocides in world history. Hopefully it will also push you to consider what role you, personally, and the Church in general have to play in a world where tens of millions still face displacement, starvation and death simply due to where they were born.

Maybe Netflix won’t figure out how to make hit movies that bypass the theater completely. But First They Killed My Father proves streaming services can be home for important stories that would never make it to the big screen of the local multiplex.

How to Stop Negativity From Killing Your Relationship