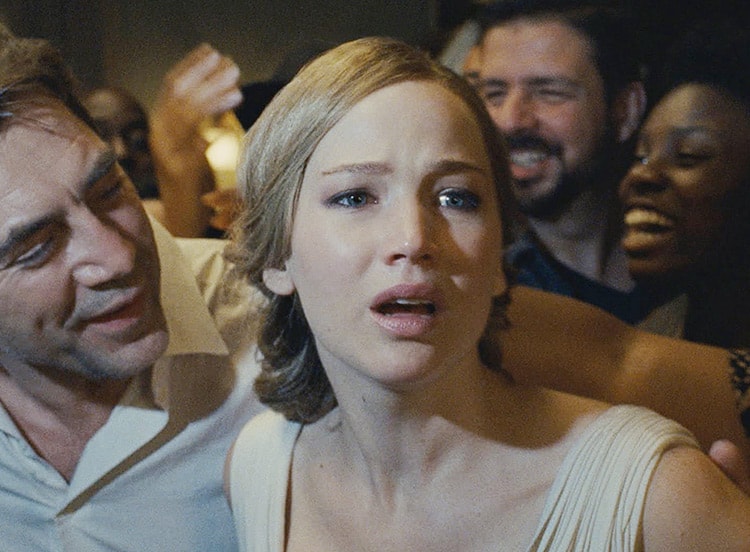 If mother! was pitched to an evangelical audience, it would go like this: Academy Award nominee Darren Aronofsky, the brilliant writer-director who gave us The Fighter, Black Swan and The Wrestler decides to tell the story of the Bible, from Genesis to Revelation. Oh, and Jennifer Lawrence, Javier Bardem, Ed Harris, Michelle Pfeiffer, Domhnall Gleeson and Kristen Wiig come along for the ride.   Sounds like the next Passion of the Christ right?

Not quite. This is the same Darren Aronofsky who gave us the interesting yet baffling big-screen interpretation of Noah in 2014, complete with B-movie rock monster fallen angels and Russell Crowe as the main character who actually wants humankind to end.

It’s not hyperbole when I tell you that mother! is the most disturbing film I’ve ever seen. I like Aronofsky’s films. I love allegories. My wife and I are obsessive Game of Thrones fans, so I clearly have a high tolerance for blood, gore and difficult themes.

But I’ve never been more miserable, overwhelmed and at times bored as I was in the sprawling two-and-a-half hour mental torture session that is mother!

GENESIS TO REVELATION, IN SURREALISM (WITH MASSIVE SPOILERS)

I’m going to do something I’ve never done as a film critic, and will never do again. I’m going to recap the entire plot, including spoilers and the ending. If you are a person who loves horror and doesn’t mind extremely disturbing themes, skip the spoilers and head to the third section.

But the vast majority of people will be disturbed just by reading about these scenes, let alone viewing them on the big screen.

Him (Javier Barem, as God), a poet, and Mother (Jennifer Lawrence, as Mother Nature), live in a beautiful, old house. Their peace is disrupted when Man (Ed Harris) and Woman (Michelle Pfeiffer) barge in as uninvited visitors, and break a rare crystal in Him’s study. Later, two of their adult children show up, and in an argument about Man’s will, one kills the other with a blow to the head.

We have a dramatic retelling of creation, Adam and Eve, original sin (the broken crystal as the forbidden fruit) and Cain killing Abel. We also see the study being boarded up and painted over (the closing of the Garden of Eden).   A huge funeral party is held at the beautiful, old house. The guests break a lot of stuff, including a water main (Noah’s flood). The next day, Him is free of writer’s block. He finishes his masterpiece and he and Mother conceive a child.

The masterpiece brings adoring fans to the house, some of whom seem genuine and others who just want free stuff, or to be a part of the crowd. The swarm of people takes over every part of the house, and Mother keeps telling Him to get it under control. Violence and looting break out, and the police show up. Some people are executed, cartel style, with bags over their heads when they’re shot at point-blank range.

Mother and Him retreat to an empty, sealed-off room where Mother gives birth to a son. Mother wants to stay hidden away, but Him sees the gifts the crowds outside are bringing and wants to show the boy to the people. Mother says no, but Him steals him from her arms as she’s sleeping.

Mother awakens to see her newborn son being crowd surfed, then having his neck broken and finally being eaten by the crowd.   Mother descends to the basement, where she punctures an oil drum and sets herself on fire, engulfing the house and killing everyone. Him carries Mother’s charred body and says he needs one more thing—her love. He rips out Mother’s heart and finds a replacement crystal inside, which he puts on display in his study, and the world is made new again.

The closing scene is a different Mother awakening in bed, after a refreshing sleep on soft sheets, the world apparently purged of humanity and ready to start the whole cycle over again.

THE GOSPEL OF TORTURE

For the record, I both like and find value in some horror films and psychological thrillers. Gone Girl may have been a terrible thesis on monogamy being impossible, marriage being terrible and all people being selfish, but it was also an amazing film that made me think hard about guarding my own marriage more closely. Annabelle: Creation is a movie that pushed me to think long and hard about the role of demonic activity and the occult in modern-day America, and was an excellent piece of cinema.

But Aronofsky’s mother! goes further than any film ever has (again, not hyperbole), and to places I didn’t want to go. The good news is that I’ve never had a moment watching any movie, Passion of the Christ not excluded, where I felt so convicted of my own sin. The bad news is that it may be more than the human psyche was meant to stand up to.   When someone lives through severe trauma, like a soldier seeing his best friend torn to bits by a grenade or a child hiding in a closet witnessing ISIS behead his family, we expect that trauma to live on in a person’s life.

Therapy can work wonders, but there’s always going to be a mental scar there. Perhaps the best way I can describe the viewing experience of mother! is that I walked away wanting to talk to a professional about how to process the trauma I’d just lived through.   Of course, film, in particular, and pop culture, in general, have a long history of pushing the envelope, which isn’t always a bad thing.

When the original King Kong was released in 1933, some audience members ran screaming from the theater, terrified of new special effects tricks the world had never seen before. But history may judge this movie as the moment we went too far in movies.

“I would say every single beat and character is related to the Bible in order—all the way through the Old Testament and the New Testament,” Aronofsky told Entertainment Weekly. “That’s the fun—for people to put that together. Even some of the dialogue—and people haven’t picked up on this yet, is verbatim from the Bible.”

Except it isn’t fun at all. There are no moments of comedic relief, or scenes for the audience to catch their collective breath. Just two-and-a-half hours of disturbing scenes and images, which grow ever more violent and disgusting.   And Aronofsky’s film is much more about global warming than about sin and redemption. And no, I’m not asking a non-Christian filmmaker to push an explicitly Gospel-centered message in his film.

Overall, I liked Aronofsky’s uneven take on Noah in 2014, which took large steps away from the Biblical narrative.   But I do expect any filmmaker who has access to a half dozen of the best actors working today and millions of dollars to execute his vision to give the audience something more than psychological torture for the sake of watching the audience squirm.

The message of the film places virtually no value on human life, and the movie itself does’t care at all for its audience, save for the pain it can cause in the viewing experience.   If you still feel the need to see mother! because some media outlets are hailing it as a cinematic masterpiece, it’s not my job as a movie critic to serve as your moral compass.

But fair warning, the cost may be much higher than a $10 ticket. You will see things that cannot be unseen, and this piece of psychological torture might take up residence in your mind long after you would like it to leave.