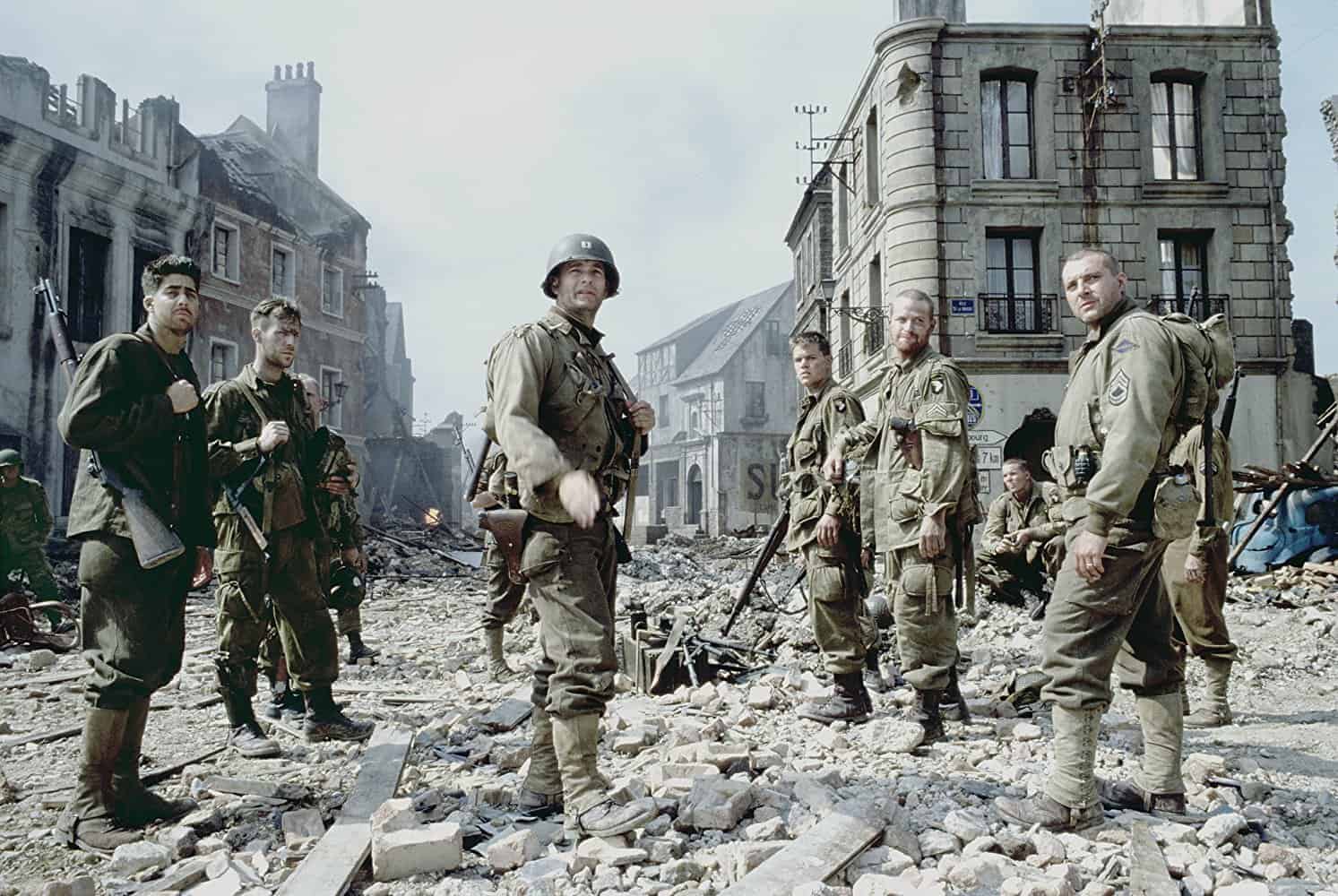 Two decades ago, Saving Private Ryan portrayed the tension between survival and sacrifice like no other movie had before. It took us alongside Captain John Miller as he led his men onto the beaches of Normandy and into the horrors of D-Day. The planks dropped, blood splattered the screen and any expectation of a happy ending was drowned with those lost in the sea. We surfaced with Miller as he tried to drag a man to shore, crawled next to him through the fog of war, and watched entire universes crumble across the beach. A soldier picked up his severed arm. A dying man cried out for mama. Others burst into flame. The film captured our nation’s attention, but it’s persisted for 20 years by bringing us into intimate relationship with a cast of vulnerable, strong and complex men.

It starts right after the initial battle, when the film’s characters deal with the trauma of what they’ve experienced as best they can. One soldier cries, and the Sergeant collects soil as a memento. As the fervor of war subsides, we are left to feel these men’s suffering, and we learn along with them how to cope. Before long, Miller, with tremulous hands, leads the surviving soldiers forward.

The narrative switches to the home front, as countless rows of women type letters to inform loved ones that their sons and husbands have been killed. Here, the mission to save Private Ryan is born when one woman realizes a mother will be notified three of her four sons are dead. A general steps up in the face of this tragedy, reciting by heart a letter from Abraham Lincoln to a mother who lost five sons in the Civil War, commending her for laying “so costly a sacrifice on the altar of freedom.”

In response to his colleagues’ assertion that an attempt to save Private Ryan is foolish and impossible, the General states, “We will send someone to find him, and get him the hell out of there.” This is manhood—a heart that cares to rescue and bring home even though there will be complicated sacrifices along the way. In this we hear echoes of another who came to seek and save; we hear echoes of the Gospel.

Spielberg weaves scenes of violence with reprieves of the battle, as soldiers joke together as they walk and share memories as they rest in an abandoned church. As the soldiers share their hearts, one remembers when he was a child how his mother would check on him after work, but he would pretend to be asleep. Now he wishes he would have opened himself up to that moment of connection.

We are drawn into these men’s interior lives through their emotional, honest spoken words. We are reminded of each man’s depths of intimacy and emotion by what we see glimpses of—the last-words letters they tuck into their uniforms. Saving Private Ryan challenges strong-and-silent stereotypes about masculinity, showing us the vulnerability that lies within manhood and behind courage. By doing so, it works to free men from the expectations that they will repress their emotions. Instead, it communicates that feelings are not shameful, but normal and healthy.

When resentment for the mission and conflict over a German prisoner boil over into anarchy and chaos, Captain Miller doesn’t try to counter his men’s rebellion with more anger. Instead he reveals a deeper part of himself, sharing who he truly is, a gentle school teacher, and says he’s afraid the trauma of war may have broken him beyond being able to return home: “Every man I kill, the farther away from home I feel.” Though we’ve been with Miller throughout Saving Private Ryan, here is when he feels most like a real man, one who does not know all the answers, but whose compass follows what he believes to be true.

When the company finally happens upon Private Ryan and explains the mission to bring him home, Ryan replies that it doesn’t make sense. As Miller considers paying the ultimate sacrifice to bring Ryan home, his sergeant reminds him that might be the way they are able to truly go home because for a good man there are worse things than death. As Miller shepherds his men, he knows that to do the wrong thing is the only thing that would keep him from returning home. Neither suffering nor grace make sense, but in the end grace redeems it all.

For the rest of his life, Ryan lives with gratitude in the shadow of Miller’s last words to “Earn this.” We live in grace we, too, do not earn, but we are also called to servitude, sacrifice, and living up to what we have already attained (Philippians 3:16) because it is as precious and brutally purchased as what Saving Private Ryan depicts.

Saving Private Ryan has spoken to us for 20 years with a narrative of men who lead with strength and sensitivity because of, not in spite of, their own brokenness. As this film shows us redemption through vulnerability, we see echoes of the Gospel.