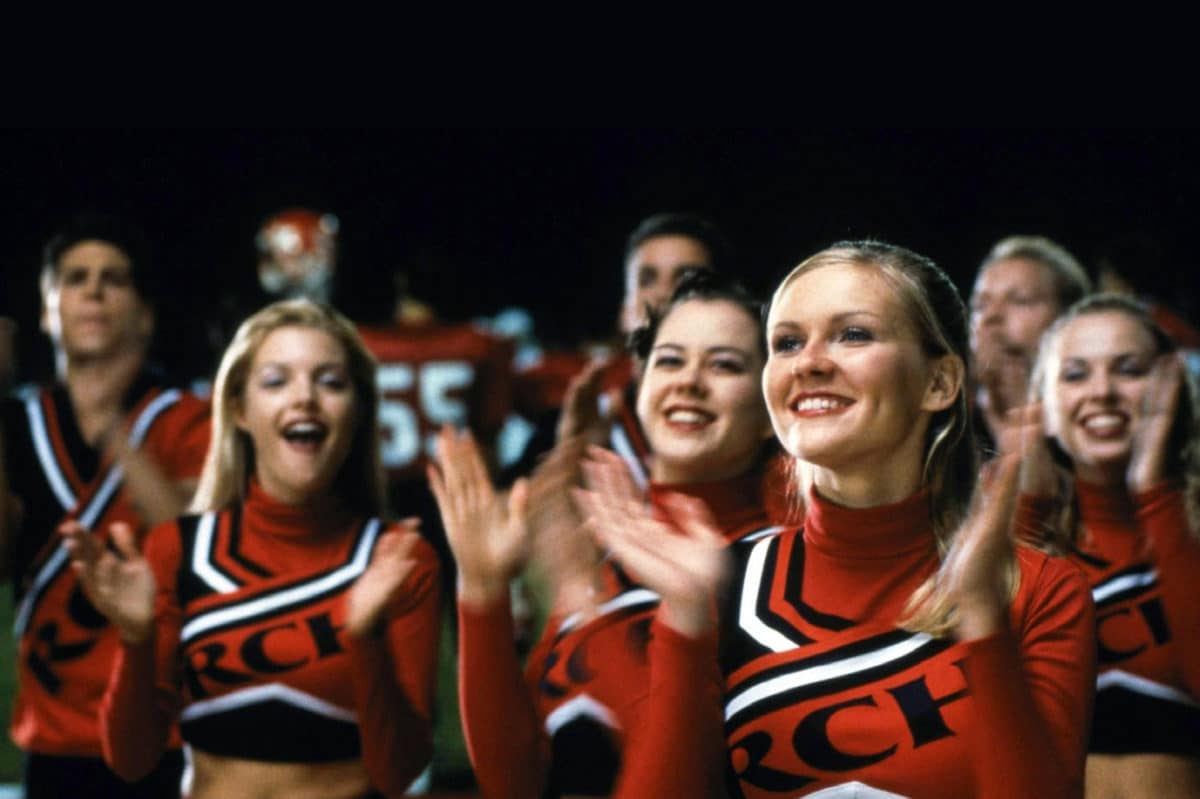 I thought watching nine hours of cheerleading movies was going to be way worse than it was, to be honest. That’s not to say Bring It On and its five sequels (!!) are good movies, really, but most of them are, at baseline, OK enough. Full of feel-good life lessons and positive takeaways, these movies are harmless, and that makes them hard to bag on. Look, I’m trying to say I like the Bring It On movies. Let me have this.

First, though, I’m sure you have some quick secondary questions. Let’s address those really quick so we’re not worrying about them later.

Which Bring It On is the best?
Probably the first one, though the one that snuck up on me was the fourth movie, Bring It On: In It to Win It. It’s a cheerleading-themed retelling of West Side Story, complete with street-brawl cheer-offs and teams called the Sharks and the Jets. Delightful. Ashley Benson from Pretty Little Liars is in it, too.

Who’s the most famous person to appear in a Bring It On movie?
Rihanna. Amazing, right? She’s in the third movie, Bring It On: All Or Nothing, as a guest cheerleading judge. She also performs “Pon De Replay” over the end credits.

Who’s the most surprising person to appear in a Bring It On movie?
Solange Knowles. She’s a supporting character in Bring It On: All Or Nothing, and is just fine. Appearing in the third Bring It On movie is a very Solange thing. It’s great.

What’s the most ruthless line of smack talk in a Bring It On movie?
In Bring It On Again (the second one), a character looks at another character’s butt and says, “it’s like a Hefty bag full of chili dogs.” Brutal.

Any weird patterns throughout the series?
Every single Bring It On movie features a ton of belly rings. Also, each movie opens with a cheerleading nightmare sequence. Facts only.

What’s your hottest Bring It On-related take?
After watching her in Bring It On: All Or Nothing, I’m convinced you could substitute Hayden Panettiere into every Jennifer Lawrence role and each movie would be just as good, just as acclaimed, and Hayden would receive just as many Oscar nominations as J-Law. @ me.

Can we move on to the life lessons now?
Wait, what? You don’t want any more cheerleading takes?

No.
Ohhhhhhkay. Moving on then.

The fun thing about the Bring It On franchise is that even though they’re predictable and simple, each one leaves you with an upbeat “that was worth the watch” feeling. They’re sweet. Your mom would say they’re “cute.” Each movie sees the cheerleaders operate in an entirely unsupervised world (there aren’t even coaches), and while that might be grounds for a bunch of Mean Girls or Superbad-style debauchery, more often than not, we come away with some pretty mature lessons. Here are some of them:

If you want someone to fall in love with you, krump (the dance) all up on them, write them a punk-rock song, take them on a scary roller coaster or coax them into an unguarded swimming pool. These are all tactics guys use to pick up girls in a Bring It On movie. They all work.

If you snap your fingers at someone, it will send them reeling. That’s how everyone punctuates a point in Bring It On. It’s a devastating conversation ender, especially when coupled with an insult like “mall rat,” which someone dropped in Bring It On: All Or Nothing. The more you think about “mall rat,” the worse it is.

Don’t make promises you can’t keep. In Bring It On: All Or Nothing, Hayden Panettiere tells her friends she won’t join the cheer squad at her new, lower-income school. Unable to resist the urge of cheerleading (who can, really?), she joins anyway and her friends become super mad at her. Hayden shouldn’t have made such a foolish promise.

But sometimes, you should break a promise. This is what’s so profound about Bring It On: All Or Nothing because it ultimately is really good that Hayden breaks that promise. She expands her perspective and ends up with truer friends than she ever had before. People and circumstances change, so every now and then, you need to go back on your word.

Even though everyone at your rival high school is automatically the worst human being alive, don’t assume they’ll stay that way. According to the Bring It On universe, rival high-school students all play music too loud, stand too close and say demeaning words to women. But also, according to the Bring It On universe, those same students might just be going through some things. If you made more of an effort, you might realize they have military fathers who don’t understand their cheerleading passions, captains who shame them for eating their favorite chocolate cake or overbearing camp counselors who stifle their creative choreography. You don’t know people’s lives; you just know they go to a garbage school. That isn’t the whole picture.

It means a lot to look at someone. In Bring It On: Fight to the Finish (the fifth one), one girl looks at another girl, then the second girl almost attacks her. That’s the entire scene. The lesson: If your look will be perceived as a threat, wear sunglasses so you won’t be caught (that’s direct advice from Bring It On 5). Alternatively, if your look will be perceived as a compliment, like when you lock eyes with a gross goatee’d boy at orientation in Bring It On Again, then look all you want, because he’ll totally date you later.

Stealing can be OK, if you steal good things. This is a more meta point about Bring It On in general, but it’s clear the Step Up and Pitch Perfect franchises owe a lot to this series. The cheer-offs become dance-offs and sing-offs, and the inherent feminism of Pitch Perfect owes a lot to the original Bring It On and its communal ra-ra empowerment.

Know when to retire. Bring It On tried to make a comeback in 2017 with their sixth movie, Bring It On: Worldwide #Cheersmack (the real title). It’s very bad. It’s about a team of hacker cheerleaders who sabotage a normal team of cheerleaders and challenge them to a global, virtual cheerleading showdown. If that wasn’t ludicrous enough, half the movie consists of teenagers showing each other videos on iPads, scrolling Instagram and using hashtags in everyday conversation. It’s like watching someone else watch a terrible cheerleading movie on their phone. In other words, this is the Jordan-on-the-Wizards or Montana-on-the-Chiefs of Bring It On movies. Don’t hang it up too late. Bring It On did.

Cheerleading is a sport. I was a hater once, too, and even though the Bring It On movies become more and more Step Up-adjacent and dancey as they go on, it’s hard to deny after watching nine hours of cheerleading that it takes supreme skill, athleticism, coordination and teamwork. Totally a sport.

Sports are the great equalizer. The cringiest parts of Bring It On are when it tries to bring issues like income equality, class, racism, gentrification and stereotyping into its cheerleading world. It’s not exactly delicate about these issues (in Bring It On: Fight to the Finish an evil cheerleader looks at the Latina cheerleader-hero and says, “Sorry, I don’t speak Taco Bell menu” and wow, your eyebrows just go all the way up into your hairline), but each movie does have some nice, if contrived, moments in which a bunch of different people learn to embrace their differences in the name of competition and sportsmanship. Sports, baby. Sports.

Listen to teenagers. The best part of the Bring It On franchise is how seriously it takes cheerleading. It never once stereotypes or disparages its characters as classic “dumb cheerleaders” and it never once derides its sport as anything less than a significant, planet-shaking competition. That’s why these movies, especially the original, work so well. If they were straight satires, we’d never care about winners and losers. By making us care about winners and losers, we’re put in the same boat as a bunch of cheerleaders.

The original Bring It On is an awesome sports movie. It’s not a romantic comedy or a vapid teen flick. It’s a sports movie about a team overcoming obstacles and interpersonal conflicts to try and succeed. In that way, it gives its world and characters a totally honest treatment because to the characters, the national cheerleading competition is the entire world. By placing us in that mindset, Bring It On creates a cheerocracy worth living in, one where you can empathize alongside the athletes instead of just pointing and laughing from the bleachers.