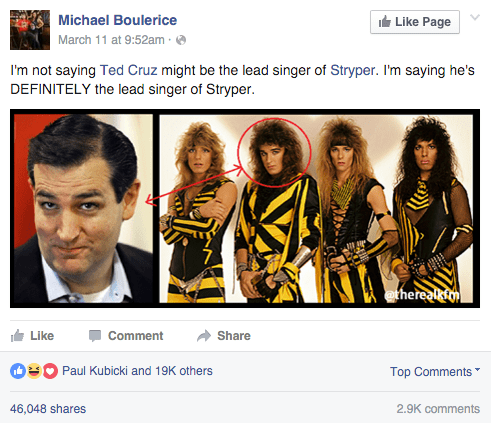 Author Michael Boulerice posted a photo of Ted Cruz and the lead singer of Stryper. And the resemblance is uncanny.

So uncanny, in fact, that it sparked a widespread theory that Ted Cruz and Michael Sweet—the “real” lead singer of Stryper—are one in the same. Michael Sweet responded to the conspiracy theory in a tweet to Ted Cruz.

Or, is it really Ted Cruz throwing us off his scent? No, that would be crazy—wouldn’t it? Regardless, it’s great to see metal musicians and politicians get along. It really emphasizes the fact that the human spirit is the thread that bonds us together—ok but seriously, they’re probably the same person.

The Maryland State Song Will No Longer Include Confederate References

Why We Need Flawed Superheroes