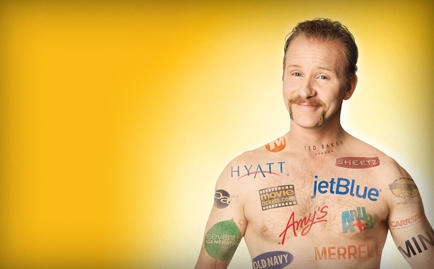 Morgan Spurlock exploded on the American pop culture scene as the star, writer and director of the humorous documentary Super Size Me in 2003. In that film, he shined a spotlight on the epic of obesity and the rampant fast-food eating habits of Americans by deciding to eat and drink nothing but McDonald’s products for 30 straight days and documenting the results.

He went on to make an insightful documentary series on the FX cable network called 30 Days, in which people had to experience something they’d never normally endure for a month in order to understand others better.  But he flopped hard with his followup film, Where in the World is Osama bin Laden? It was a classic case of a concept being too catchy for its own good, as Spurlock headed into the Middle East with a camera crew to search for the al-Qaeda leader and instead found nothing, despite pre-release hype that led some to believe he had actually gone toe to toe with the terrorist. The result was instead a feature-length plea for understanding of the Middle East and Muslims that felt flat and repetitive.

Spurlock has come back swinging with what might be an even greater concept and film than Super Size Me, as his new movie Pom Wonderful Presents: The Greatest Movie Ever Sold takes on the world of product placements and over-the-top advertising that has overtaken so much of modern life.

He centers the film on an utterly ingenious concept: offering companies the chance to place their products in his film in exchange for paying a share of the budget—and scoring enough deals that the entire film was literally bought and paid for without his having to ask for a dime from Hollywood. For instance, he’ll blatantly use Ban brand deodorant in the movie in exchange for the company giving him $50,000. For $100,000 he’ll repeatedly eat a particular brand of pizza. And Pom Wonderful pomegranate juice bought the rights to have their name in the title for a cool million dollars.

The result is funny as well as fascinating, and harbors a sincere underlying plea for us to take a step back from the madness and consider how much advertising is too much, and whether we need to preserve some sacred quiet space in our minds as well as in society.

Spurlock sat down for a discussion of his new film at the Andaz Hotel on the Los Angeles Sunset Strip during the week of the film’s opening. Even that location was ironic, as the Andaz is owned by the Hyatt Hotel corporation—a major sponsor of the film.

Do you believe in guerrilla marketing?

Spurlock: I think it works. Before I started working in the film business, I worked for a grassroots events marketing company. I think guerrilla and grassroots marketing are great ways to get ideas out there, get people talking about things and build buzz and excitement. I learned more in that time from one of my mentors than I did through years of film school.

In the film, you show how the city of Sao Paulo, Brazil, has almost no public advertising at all anymore. I knew it was like that in Cuba, but not there. It’s surprising since this is a capitalist system in Brazil.

Spurlock: I think they wanted to deal with serious problems. Sao Paolo was a very dangerous place for a long time. Even when I was there in 2003 (to promote Super Size Me) people were getting kidnapped, I was being driven around in a bulletproof car and there were guys stationed at the end of each block in some neighborhoods with machine guns to protect the people who lived or traveled in between from gang warfare. It was a very sketchy place. One of the things they wanted to do was to address these problems, so they said, "Take away the advertising and the pollution it causes, take away the distractions and the noise and force people to look at the city head on, and look at the people they interact with and look at their neighborhoods." Crime’s gone down, the quality of living has gone up and the only jobs affected were the people who actually put up billboards. Everybody else’s businesses have had to focus on making better business, customer service and quality products.

For me, it’s a fascinating example of, where do we draw the line. How do we stop? There’s an idea called the broken-window theory. If you see a broken window, one will lead to more broken windows. You see an imperfect place and it keeps sliding. Now, by doing it this other way, they’re pushing to a much more perfect identity and place just because of the way people responded to it. I interviewed 80 people in that city, and not one said, “Man it would be so nice if there were more posters or bus stop ads.” If it’s a political thing about why you’re getting rid of this, every business owner would push against it. And that’s not happening. It’s not like there’s a dictator running the country, putting his picture up everywhere instead. It’s a referendum by a city council that was voted on and passed. It’s a remarkable thing that they pushed through, and it’s pretty inspiring.

What was the company that surprised you the most for being in it? And for turning you down?

Spurlock: The company I was most surprised was in the film was Hyatt. Hyatt is traditionally an incredibly conservative company and they made a point of trying to change the perception of who they are. We’re staying in a Hyatt—the Andaz is a Hyatt. But just like with their boutique hotels, they’re always looking to do something different. But it was also great for me because what their coming on did was it made a lot of other companies say, “Well, if Hyatt is doing it…” Here’s this Fortune 500 company with a blue-chip name with brand identity, then why not them?

The company that most disappointed me was In-N-Out Burger. I wanted a fast food partner so bad, we wanted to make a doc-buster—a documentary blockbuster. If you’re gonna make a doc-buster, you gotta have a Happy Meal, you gotta have a kids’ meal. We called McDonald’s but they didn’t call back. We called Burger King, they called and said, “Thanks, but no thanks.” We called Taco Bell, Jack in the Box, every fast food company you can think of and they all said no. I stalked In-N-Out, called them every week for weeks and weeks and weeks and said, “It’ll be great and amazing—we can make an Un-Happy Meal, we’ll make the box covered in how marketing and advertising works and why you bought it.” And they said, "No, it doesn’t sound amazing at all for us."

Since you have a grassroots marketing background, did anything you learned about marketing with this film surprise you?

Spurlock: You don’t understand the influence the brands will start to have on the creative process until they’re involved in the creative process. You have them say, “Shoot here,” “Talk about us like this in the film or say these certain things,” “We expect a certain amount of screen time in the film.” When you’re expected to deliver on all these metrics of expectations, you start to realize, “Wow, I’m potentially going to lose control of the film I wanna make.” At what point do you push back so it doesn’t become a commercial? What made it work really great for this film, because it did start to steer the course of the narrative, when I go pitch Pom and here’s the commercial we want to make and they say: “No! We want you to make it like this, which is basically everything we want you to say about our company." For me, I love that because it does fall under the idea of truth in advertising. It’s one of my favorite parts of the film. For me, that’s it. I thought there would be a way to push the brands back and not have them influence the decision-making process, but that doesn’t happen. Once they’re in, they’re in.

Do you feel with the finished film that you maintained the goal you set out to accomplish by making a film about advertising?

Spurlock: I think the fact that we were able to maintain creative control of the film was huge. That enabled us not to sell out but to buy into how these Hollywood films are made, and that you need these promotional partners to get larger releases, attention or buzz. We did make the film that dissected the process, what goes on behind the curtain. The film works on a lot of levels, but the biggest is that after you watch this film, you’ll never look at a TV show or movie the same way again. And I think that level of awareness is a great thing to have. What it also does is that once you leave the theater, you become even more hyper-aware of all the marketing and advertising that’s in your life. Everything you see outside, even if it’s on a billboard or poster—this will make you ask the question that Sao Paolo asked: Where do we draw the line? How much is too much? Do we really need to live in this world where everything’s brought to us by some sponsor? Or is there some place that is sacred, and what the film shows is that we live in a time where nothing is sacred and everything is for sale.

Can the Church Be Colorblind?